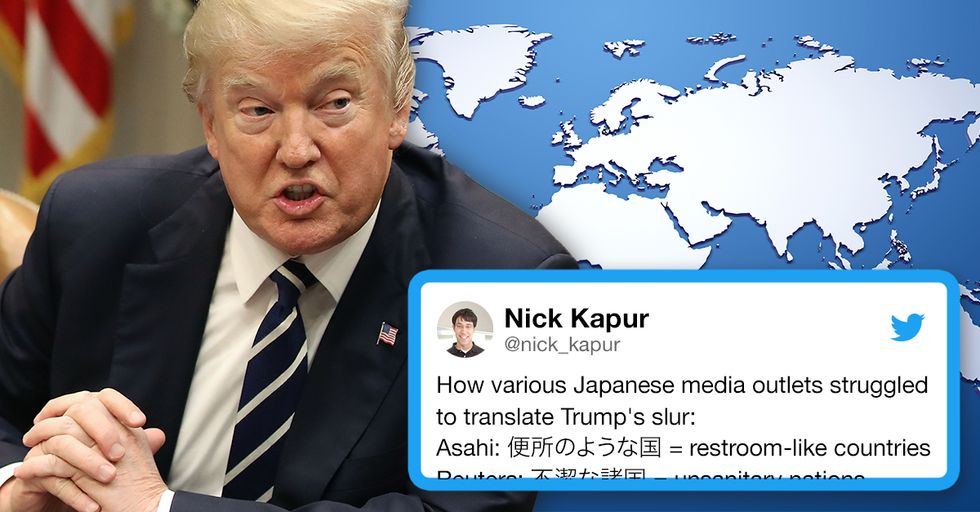 How do you say "sh*thole" in French?

That's something I'm guessing people who work at French media outlets never thought they'd be asking themselves. But thanks to Trump's sh*tty comments this week, they had no choice.

News outlets around the world used a variety of different words to translate Trump's racist comments about immigrants from Haiti, El Salvador, and countries in Africa. And because I'm a linguistics nerd, I decided to report on them.

ICYMI, Donald Trump referred to a bunch of countries as "sh*thole counties" while discussing an immigration deal.

"Why are we having all these people from sh*thole countries come here?" he reportedly asked a group of lawmakers while discussing immigrants from Hati, El Salvador, and African countries. "Why do we need more Haitians?" he asked. "Take them out." Trump then went on to suggest that the U.S. should bring in more people from countries like Norway. In case you're struggling with the subtext there, he meant "white people."
Obviously, I don't need to explain the issues with Trump's statements. These stunningly racist remarks were just the latest in a presidency peppered with endless instances of both covert and overt racism.

But the comments did provide media outlets with a fascinating linguistic conundrum.

When the President of the United States compares countries to buttholes, you can't not report on it. But the word "sh*thole" doesn't have a direct translation in many languages. What to do? Here's how some media outlets from around the world chose to translate the phrase "sh*thole country." Because that's something news outlets had to do today. Because the President of the United States said it.

The phrase translates literally to "sh*tty countries," meaning the French didn't rely on any euphemisms. But they also didn't include the word "hole," which I think results in it lacking a certain je ne sais quoi.

There were also a few who took the same route as the French and used "países de mierda." That literally means "countries of sh*t," but is more colloquially understood as "f*cking countries." The Germans focused more on the "hole" part of "sh*thole"...

The word means "dirt hole" or "sinkhole" but is considered vulgar. They're not talking about dirt on the ground if you know what I mean.

One Dutch newspaper used the word "achterlijk," which actually has nothing to do with sh*t or holes.

Instead, the word means "backward." As in, "Can you believe how backward the views of the current U.S. president are? His mouth sure does resemble a sh*thole sometimes!"

Japanese outlets also struggled with the word sh*thole. One of the options used was a word that translates to "outdoor toilet."

Other Japanese outlets used the words for "restroom-like countries," "unsanitary nations," and my personal favorite: "countries not fit to be fertilizer."

In Portuguese, at least one outlet used the word "chiqueiro."

It means pigsty. And now for my favorite translations of "sh*thole," which come to us from one of Trump's favorite countries to say in an absolutely bizarre way: China.
Twitter user Blake Stone-Banks shared how his friends in Beijing are translating the word "sh*thole." They're using characters that translate to "trash country," "broken place, "haunted spot," "manure kingdom," and...wait for it... "barren mountains and evil waters." Whoa. That is some intense language. I'd say that I can't wait to see what absurd thing Trump says next, but I actually can. I could wait a really, really long time without hearing about Trump's latest awful comments. Unfortunately, I probably won't have to.