Trump's State of the Union Tickets Were Misspelled. That Bodes Well. | 22 Words 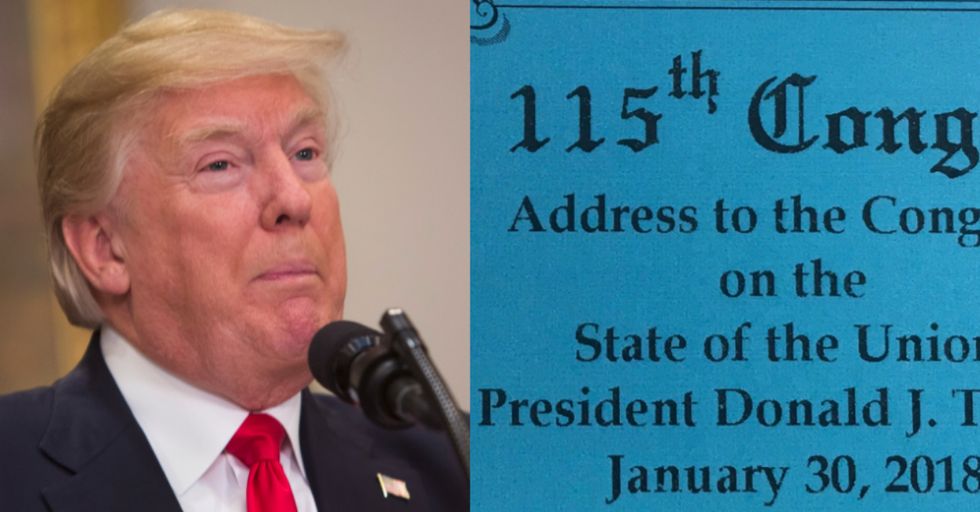 Trump's State of the Union Tickets Were Misspelled. That Bodes Well.

My fiancé's favorite Simpsons joke is from the "Itchy and Scratchy Land" episode when the helicopter pilot is taking the Simpsons to the park and he says, "Nothing can possib-lie go wrong. Uh, possibly go wrong. Huh. That's the first thing that's ever gone wrong."

Anyway, don't know why I was thinking of that particular joke — oh wait, yes I do. Donald Trump's State of the Union address hasn't even happened yet and all the things that can possib-lie go wrong are already going wrong.

News reporter Josh Robin asked us if we could spot the mistake on this ticket for Donald Trump's State of the Union address.

The speech is happening tonight, January 30, at 9 p.m. EST. And if the speech is anything like the tickets distributed for it, it promises to be a hot mess.

Unfortunately, it seems we can't pin this one directly on Donald Trump or his administration.

According to Politico, it's the sergeant-at-arms who is responsible for printing the tickets to the event. Wikipedia says that it is the job of a sergeant-at-arms to "keep order." Oops!!!!!

Sergeant-at-arms, you had one job...

A typo on a ticket might not seem like a big deal until you think about how Republicans would have erupted if this happened when Obama was president.

But I'm sure the speech will go off without a hitch!

People keep saying this is a chance for Trump to "act presidential," as if he hasn't had a billion chances to do just that and failed at every single one in the last year. Call me crazy for not being hopeful that Donald Trump will somehow turn his entire presidency around with one speech. But Donald Trump on live TV? That promises to be a sight to behold. As you know, the man's a well-oiled machine who loves to prepare. What could possib-lie go wrong?