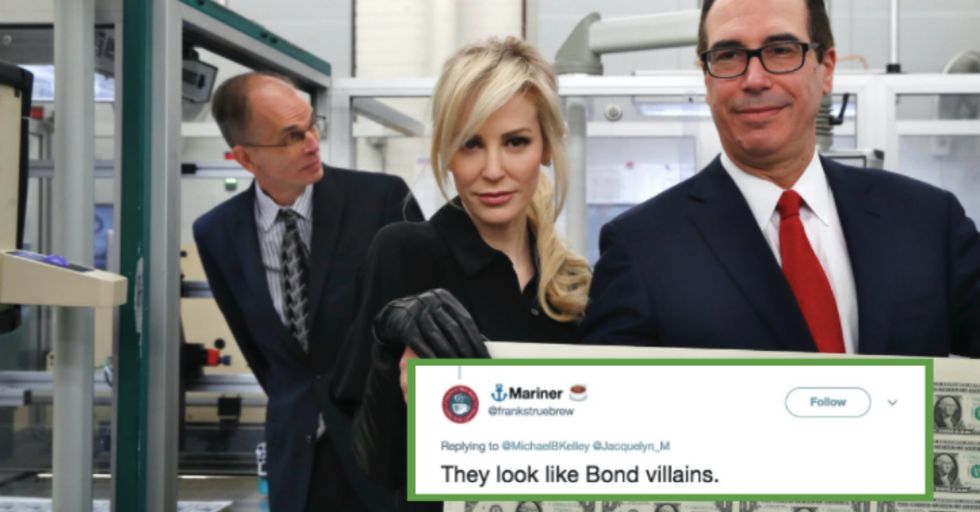 Yesterday, the U.S. Treasury printed the first currency notes with Treasury Secretary Steve Mnuchin's signature on them. As this was a momentous occasion, Mnuchin and his wife went to the Treasury to admire the new bills. Pictures of the event were shared online and the Internet did what it does best: It made fun of the ridiculous photos with memes!

When you're the Treasury Secretary, your signature gets printed on a bunch of money. It's one of the perks of the job.

And it's a pretty awesome perk, actually. Imagine going to pay for your morning coffee and being greeted by your own autograph! That's what life is like now for Steve Mnuchin. To celebrate his signature being printed on money, he and his wife, Louise Linton (who notoriously shamed people for being poor) went to the Treasury to snap some pics with the new bills. The pictures, as you can see, are pretty ridiculous.

The Internet immediately pointed out the obvious:

Mnuchin and Linton look like they're plotting to take over the world. Seriously. Who let those guys near all that money?

That has to be why Louise Linton is wearing gloves, right?

Too bad there's all this photo evidence of their visit. Curses! Foiled again!

We also love this take, interpreting the photo op as a ploy for the two of them to appear more relatable.

You can almost hear Mnuchin and Linton asking, "Is this how poor people hold money?" To their credit, those are $1-dollar bills — easily the most relatable form of cash. This may very well be the first time either of them has seen one of those.

We can see it. She looks to be about 30 seconds away from having a lightsaber temper tantrum. The comparisons to movie villains didn't stop there...

This Twitter user noticed how similar Linton's outfit was to Judge Doom's in Who Framed Roger Rabbit.

Everyone's focused on Steve Mnuchin & the sheet of money but no one's talking about how his wife has been murdering… https://t.co/J4iHjewQKN
— Johnny McNulty (@Johnny McNulty)1510776960.0

The only way that outfit makes sense is if Linton got unexpectedly called away from dropping a cartoon shoe into The Dip and didn't have time to change in the car.

One thing's for sure: There's something Louise Linton really likes about seeing her husband hold up a bunch of money.

And it's probably not her husband's rugged good looks or glowing personality. (It's the money.)

In their quest to become relatable, Steve Mnuchin and Louise Linton provided the Internet with pure gold (which is pretty impressive, considering the fact they were dealing with paper money).