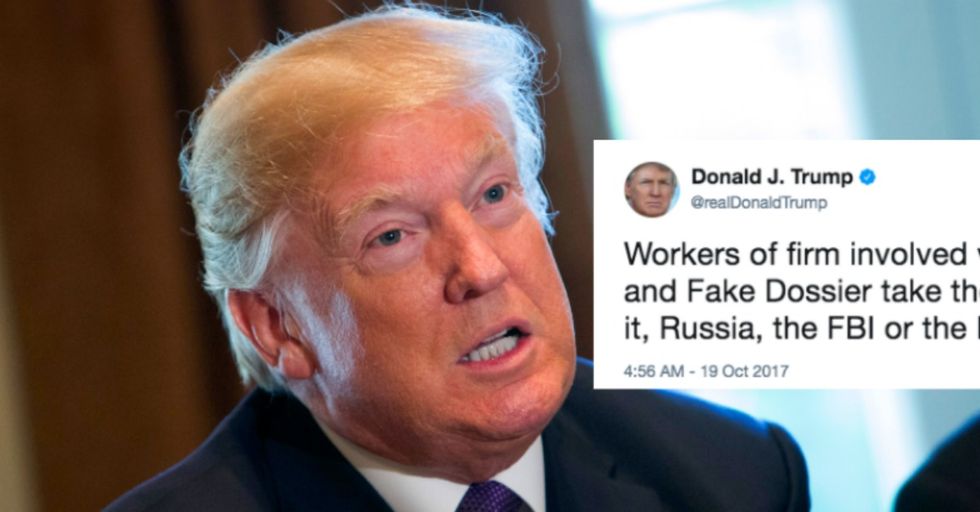 Trump Actually Tweeted About the Infamous ‘Pee Tape’ This Morning

Do you remember January of this year? Probably not. Too many things have happened since then. But let's take a stroll down memory lane for a moment, way back to the 10th day of the first month of 2017. That was when BuzzFeed published an explosive dossier put together by the very aptly-named Christopher Steele, a former British intelligence officer who honestly sounds like he could be James Bond.

The unverified reports alleged that the Russian government had been "cultivating, supporting and assisting" Donald Trump for years. They also claimed that the Russians have compromising information about Trump — specifically a video of Trump in a Moscow hotel room participating in indecorous activities with multiple prostitutes. The rumored tape resulted in the dossier being dubbed the "pee tape" or "golden shower" dossier.

At the time the dossier was made public, Donald Trump tweeted that it was fake news, a "total political witch hunt."

But then, Robert Mueller, special counsel for the investigation into the connection between Donald Trump's campaign and Russian officials, interviewed Christopher Steele, who published the dossier. This seemed to lend a little credence to the idea that the dossier might actually be — at least partly — true. Earlier this week, Fusion GPS, the firm behind the dossier (they hired Steele to produce the report) met with House Intelligence Committee, but they wouldn't spill the beans as to who actually financed the research.

Donald Trump had a few ideas, though, so he did the clearly responsible thing and rage-tweeted them early on Thursday morning:

Trump seems to think the "discredited and Fake Dossier" was paid for by the FBI (a U.S. government agency), Russia, the Democrats, or some combination of all three.

Obviously, Twitter went ballistic after Trump acknowledged the dossier. Some believed that if he's trying to cause a hullabaloo about the financers, that must mean it's real:

And if the dossier (which hasn't been entirely discredited, by the way. Mueller wouldn't have met with Steele if there wasn't at least some possibility that there's truth to it.) is real, you know what that means...

You better believe Twitter was pee-its-pants excited about the pee tape this morning. But while it would be humiliating for Trump if the pee tape and other elements of the dossier are real, it would also mean that Trump definitely knowingly colluded with Russia during his presidential campaign. That's the serious stuff.

Not to mention, Trump's off-hand morning tweet is actually a huge accusation against the largest intelligence agency in the U.S. government.

The president has, again, created an entire news cycle about whether he believes the FBI is a rogue agency within the U.S. govt.
— Jake Sherman (@Jake Sherman)1508414273.0

In a world in which there was no dossier or pee tape or constant lying or insensitive phone calls to grieving military widows or abandoning Puerto Rico or excusing white supremacists or sexually harassing and assaulting women, this sort of wild accusation from the President of the United States would be front-page news for weeks. But alas, we live in this world.