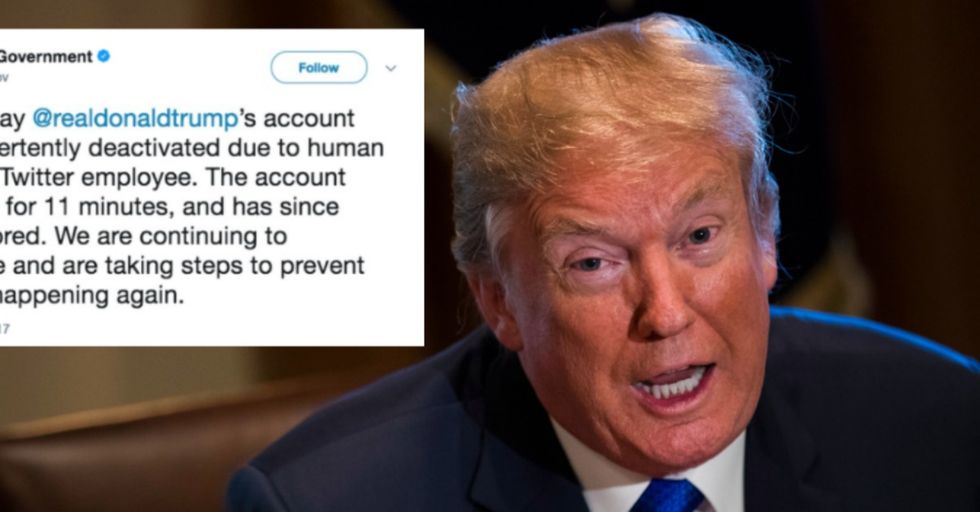 For 11 glorious minutes on the evening of Thursday, November 2, there was an eerie calm that fell like fog over the entire world. For those 11 minutes, Donald Trump's Twitter account was deactivated. Yes, this really happened. If you tried to find "@realdonaldtrump" on Twitter between around 6:45 p.m. and 6:56 p.m. ET, you couldn't do it. Because it wasn't there. "Sorry, that page doesn't exist!" Twitter would say when you searched for the president's page. "Don't be sorry," we would reply, hopeful that this feeling would last forever. After an investigation, it was revealed that a rogue Twitter employee deactivated the account on purpose as a triumphant salute to the universe on their last day of work. The Twitter employee has not been named, but most are calling them "hero."

Many noticed right away that the president's personal Twitter account, @realdonaldtrump, was suddenly nowhere to be found on Thursday evening.

It must have been the deafening social media silence that gave it away. Or the suddenly cheery attitudes of Twitter users everywhere. Or the tiny, hard, black pebbles in all our souls that momentarily bloomed back into flowers.

We're not sure. But one thing that seemed certain at the time was that because the deactivation wasn't announced, it probably wasn't planned in advance.

"Human error," eh? Why don't we entirely believe it was an error?

Well, because it wasn't. Two hours later, Twitter updated its explanation, and folks, it's simply spectacular:

Through our investigation we have learned that this was done by a Twitter customer support employee who did this on… https://t.co/19oVsYAN2t
— TwitterGov (@TwitterGov)1509674428.0

"This was done by a Twitter customer support employee who did this on the employee's last day." The employee has not been named, and it's unclear whether this person had quit or was fired, but either way, let's pause for a standing ovation. A former Twitter employee told BuzzFeed News that "a lot" of employees have the ability to suspend a user's account, and that fewer can deactivate one. (For the record, Twitter suspension is different from deactivation. Deactivation is what happened to Trump.)

Trump addressed his temporary Twitter outage in one of his classic early-morning tweets:

Since this moment, three hours prior to the writing of this article, Trump has tweeted seven times, mentioned "Crooked Hillary," and referred to Elizabeth Warren by his racist "Pocahontas" nickname. We'd say the word is definitely getting out there — the word of his instability and pure awfulness. Needless to say, Twitter had some beautiful reactions to this monumental Twitter event.

"Mad respect" seemed to be the feelings people had toward Rogue Twitter Employee, as this person shall now be called.

While this person deserves so much more than a tip of the cap, it's a good place to start. While we understand that this person might prefer to remain anonymous, we're hoping they get some sort of recognition at some point.

George Takei, like all of us, was so caught off guard by the pleasant feeling of those 11 minutes that we didn't even know what we were experiencing.

Trump's Twitter deactivated for 11 min, and I suddenly thought I'd jumped back into the real timeline where things aren't so damned absurd.
— George Takei (@George Takei)1509668378.0

Is this what's it's going to feel like when Donald Trump and all his cabinet members end up in jail? Only way better? We sure hope so.

It is called the Nobel Peace Prize, after all. And that's what we all finally felt for those 11 minutes: peace. Man, we just cannot wait until this whole thing* is over. *Donald Trump