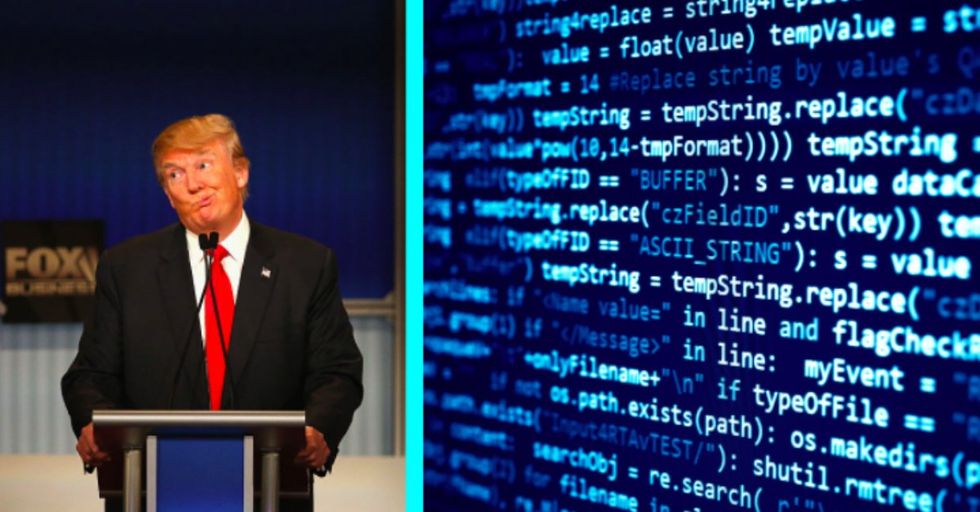 For someone who seems to have difficulty holding a glass of water, President Trump sure can hold onto a grudge! It's been more than a year since he was elected president, and yet he still tweets almost constantly about both his opponent Hillary Clinton and his predecessor President Obama. It's decidedly not a good look...but then again, he's never really been one for fashion, either.

This week, someone discovered that some pages on Trump's RNC-sponsored website include a dig at Barack Obama.

Yesterday, if you pulled up the source code of some of Donald Trump's web pages, you'd see this...er...fascinating error message.

The code is supposed to display the following message whenever the page fails to load correctly: "Oops! Something went wrong. Unlike Obama, we are working to fix the problem... and not on the golf course."

This sneaky insult was present on several of Trump's web pages, including the GOP.com homepage.

The code could also be found on the Inaugural Year Approval Poll page, which also features a highly biased poll about how Donald Trump compares to Barack Obama. (Seriously, folks. We couldn't make this stuff up.) In other words, the RNC apparently paid for pages which featured hidden digs at former President Barack Obama. The maturity is just astounding.

And yes, there's an insult for Hillary Clinton, too.

Another error message reads, "What do Hillary Clinton and this link have in common? They’re both dead broke." (Is now a good time to bring up the fact that Trump has declared bankruptcy on six separate occasions? No? OK. Then we will refrain.)

From the mind who brought us nicknames like "Liddle Bob Corker" and "Crooked Hillary" comes...a dig about playing golf? Great. Like we said, hilarious.

We imagine the coders looked something like this as they snuck those insults into the website code.

This move is almost as petty as trying to block someone's view of the president's golf game by hiring a giant truck to park on the sidewalk. Which is also something Donald Trump did. There was just one tiny problem with the coded insult. Actually, it was a pretty big problem...

It wasn't written correctly, so those hilarious insults were never even displayed.

We only know about the insults because someone thought to check the source code. What's even sweeter is the fact that the reason the code failed was that whoever built the code failed to use something called an "equality test" within the code itself. Is there something to Donald Trump failing to understand the significance of equality? Surely not!

But it gets even sweeter! Back when Trump just a presidential candidate, he attacked the healthcare.gov website and claimed that it wasn't worth the money being put into it.

He even bragged about how he saved money on his own websites. "I have so many websites, I have 'em all over the place," he said at one point. "I hire people, they do a website, it costs me $3." Well, ya get what you pay for, Mr. Trump.

There's also some great irony in the fact that Donald Trump is taking a dig at Obama's golfing habit.

After all, Trump has spent more than 25% of his presidency at a golf club (so far). What's that phrase about the pot calling the kettle black?

You sure did stick it to the haters, huh? Except for that whole "it didn't even work" thing. Bummer. At least now the world finally knows just how committed you are to insulting people. You know, in case they couldn't tell from your Twitter feed.

Alas, it appears that the code has since been deleted from Trump's web pages.

Most likely because someone finally put the pieces together and realized how bad it looks to criticize Obama for playing golf when Trump plays much more often. At least someone running around in Trump's circles appears to be aware of how ridiculous the guy looks. Anyway, we're off to go search for more HTML Easter eggs!