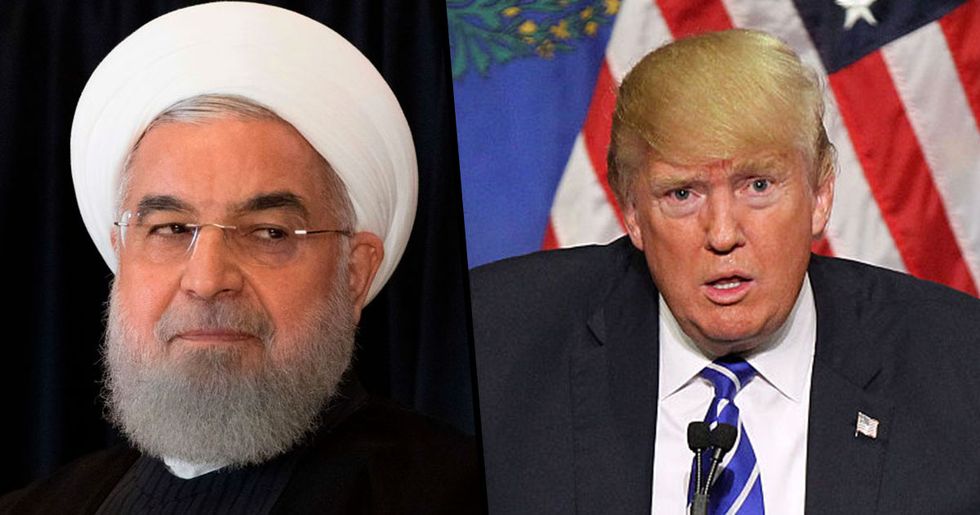 Over the past months (and particularly, recent days) tensions have grown between the USA and Iran. Much of this has been as a consequence of the actions of President Trump, who has imposed sanctions on Iran's leader, Hassan Rouhani, alongside other officials, including Ayatollah Ali Khamenei and Iran’s foreign, minister Mohammad Javad. The problem? It seems like the Trump administration has imposed sanctions while, at the same time, attempting to engage Iran in talks surrounding their respective nuclear weapons programs.

Now, Rouhani has hit back at these seemingly contradictory actions. But what he said about the President seems likely to cause even bigger rifts in their relationship - which is pretty scary for the rest of the world to watch.

Trump is well known for having some pretty controversial opinions.

Whether he's offensively impersonating a disabled reporter or engaging in some off-color "locker room talk," we can pretty much always be sure that we're only moments away from hearing something that we don't like from the President.

But Trump's latest moves may have some devastating consequences.

It involves the complex relationship between the US and Iran - and, in particular, the rules governing nuclear armament on both sides.

This issue has long been on Trump's radar.

The Persian Gulf has long been a thorny topic for the President. In 2015, Trump pulled out of an agreement in which the US would lift economic sanctions on Iran in return for the limiting of their nuclear program.

In recent weeks, these tensions have resurfaced.

A US Drone was shot down last week by Iran - although they claim that the drone was in their territory and they were totally within their rights.

US officials have also claimed that two of their oil tankers were attacked earlier this month near the Strait of Hormuz. However, this claim seems to have faded into the background due to a lack of evidence.

The President took to Twitter to discuss the ins and outs of this complex political problem, in his trademark simplistic language.

The White House released an official statement and a video of Trump signing an executive order to introduce rigorous sanctions to Iran unless they made big changes to their nuclear program.

As you've probably guessed, the main motivator is money.

These new sanctions imposed by Trump will attempt to freeze billions of dollars of Iranian assets until their cooperation is ensured.

But Trump's broadcast couldn't go off without hitch.

One of the officials that he attempted to impose sanctions on in his executive order was Ayatollah Khomeini - a man who died in 1989. Nicely done.

Although it's likely that the actual impacts of Trump's order will be pretty limited.

Richard Johnson (pictured on the far right), the US state department’s former acting assistant coordinator of the Iran nuclear deal, was quoted in the Independent, saying, “Frankly I doubt that there’s many international companies doing business with these organizations, so I don’t think the sanctions will have a really substantive effect on Iran’s economy. I do think it’s much more symbolic than it is substantive."

The Iranian President has been forced to respond to Trump's bold move.

In a live television broadcast, Hassan Rouhani implored Trump, saying, "You sanction the foreign minister simultaneously with a request for talks?"

And Rouhani didn't stop there.

He also tossed some choice insults Trump's way, calling his actions "outrageous and idiotic," and claiming that the White House is "afflicted by mental retardation."

Rouhani isn't the only Iranian official to speak out.

Abbas Mousavi, a spokesman for Iran's Foreign Ministry, claimed that the Trump administration was, "destroying the established international mechanisms for maintaining world peace and security."

Although, needless to say, Trump disagrees.

He claims that these "hard hitting" sanctions are "a strong and proportionate response to Iran’s increasingly provocative actions."

And there are still some firmly on Trump's side.

"The president has held the door open to real negotiations to completely and verifiably eliminate Iran’s nuclear weapons program, its ballistic missile delivery systems, its support for international terrorism and other malign behavior worldwide," offered John Bolton, Trump's national security advisor. "All that Iran needs to do is to walk through that open door."

Now the rest of the world has been forced to get involved in the disagreement.

This Monday, France, Germany, and the UK released a joint statement admitting "grave concern" about the situation and hoping for "de-escalation and dialogue" in the Gulf.

The U.A.E. called for deescalation and a political solution to the tensions gripping the Gulf region after U.S. Pre… https://t.co/ABHij57uyI
— Bloomberg (@Bloomberg)1561287117.0

The United Arab Emirates has also spoken out, calling for a de-escalation of the situation before things have the potential to spiral out of control.

Many have spoken out against Trump.

Chairman of the House Budget Committee, John Yarmuth, has drawn attention to details in the 2015 agreement which line up perfectly with what Trump is only now asking for.

The way that Trump appears to be dealing with this complex and potentially treacherous situation seems symptomatic of his general leadership style - and that's not a good thing.

Oh, and he still can't seem to stop tweeting.

In fact, it almost seems as if he's attempting to provoke further conflict - and when nuclear weapons are involved, that's an incredibly scary prospect.