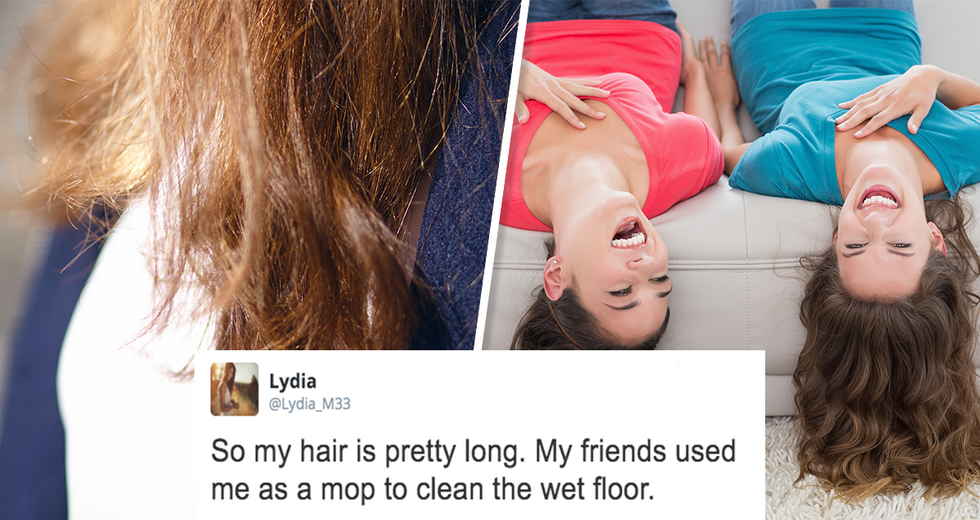 If you've ever snuck down to your friends' parents' basement to play a sneaky game of Truth or Dare — maybe even with... girls? — you know that the game is thrilling in how dangerous it can be. Maybe you'll be dared to kiss your crush Emily, or reveal your deepest secret (which is that you have a crush on Emily), or, best-case scenario, get your buddy Tim to do something super dumb so Emily, who is your crush, stops liking him. The possibilities are endless.

But, believe it or not, sometimes things happen during games of truth or Dare that have nothing to do with your crush. Sometimes, games of Truth or Dare have unimaginable consequences, both for the positive and negative. We've collected here some of the best Truth or Dare stories from an Ask Reddit thread that detail some of the mind-blowing things that have happened when these people made, perhaps, the most important choice in every adolescents' life: truth or dare.

And every year, on the anniversary of that day, they held an Awesome Day party to commemorate this awesome day.

I got to see my friends sisters boobs and watch him lick an electric fence all in the same day. - Scuzzlebutt97

And now he is a professional frisbee-catcher.

Was dared to catch a frisbee in my teeth from "across the yard." So, I walked outside and across the yard. Girl wound up, threw the frisbee, figured "eh, this ought to be funny when it bounces off my face" ... and as a total f*cking fluke, actually caught it in my teeth. - MuhLaws

I got my hopes up, only for them to be immediately dashed.

I wasn't even playing and someone dared a girl I liked to kiss me. That someone became a very good friend. - jackspicerii Eh, I guess friendship is fine too... *kicks a rock in disappointment*

The greatest riddle of our time... solved.

I found out who took my calculator. (I bet it was that jerk Tim. He's responsible for everything.)

Didn't think you'd be walking away from Truth or Dare with enough money for two Chipotle burritos, did you?

I won $20 by doing a dare in which I ran outside in my underwear when it was sleeting outside. - Cheetodude625

And a beautiful, shout-y love was born.

Was sitting outside at a college campus and was dared to yell "I love you" to the next person I saw. I did and this dude yells it back and keeps walking. We go back and forth getting louder and louder as he walks off. - broadwayatheart

I wonder if he was dared to get beaten up.

Made out with this chick I had a crush on... Turns out she had a boyfriend. He beat the sh*t out of me. - wereluke4 But maybe the boyfriend wasn't angry the Original Poster kissed his girlfriend after all... I think he was just jealous OP didn't make out with him. - WanAndOnlyBissaka

A good friend would have poured Dr. Pepper on the floor first.

I got to watch my friend lick the floor for 10 seconds. - BordeszTheDoge

I was about 12 at a friend's sleepover. I was dared to go home (by a kid who didn't like me too much). I walked the two miles home and as I came to my driveway, my older brother had just pulled in. He had three baby raccoons with him because he had hit their mother while delivering pizza. I got to spend the rest of the night with him, three raccoons, and a pepperoni pizza watching Nightmare on Elm Street. - Butterstache

In high school, I was dared to play "gay chicken", which is where two straight guys pretend to be gay, and the first one to chicken out loses. The other guy and I are both really stubborn, and neither one of us wanted to lose. We've been married 14 years and we run a bed and breakfast in Vermont with out adopted daughter. If that dude doesn't chicken out soon, I'm going to start to suspect that he's actually gay. - Lovebot_AI

I was allowed to join the game. - Zitrusfleisch Man, some of us who grew up with great and inclusive friends maybe took that for granted.

The plan was successful.

The first day I met my wife we played a game of Truth or Dare. She asked me truth, what kind of clothes on a girl do you like? Then the next day she showed up to my house in those clothes. - nonuniqueusername

Was it a hot nutcracker?

I made my friend's boyfriend make out with a 4 foot tall nutcracker. - ReshiWaystone

It's the experienced players' job to explain the rules to a newbie.

When I was in high school, we played truth or dare Jenga. I was the first to get a dare piece and I did the dare. I had to blow in some guy’s ear. Fine. A little embarrassing, but that’s what you do. The next time a dare came up, the person refused to do it. Everyone was like “okay!" The next few people also refused to do their dares. I was like wtf? One girl said “um... nobody actually DOES the dares!" with a withering tone that might as well have said “you idiot." F*ck those guys. - allthebacon_and_eggs

Sometimes, the only way to win is not to play.

I chose truth every time because I was super boring and had nothing to hide. I got made fun of that weekend, but Monday morning the nasty wannabe popular bitch went around spreading everyone’s secrets, and the ridiculous dares they did. Everyone except me. Boring for the win. - BeeVeryAfraid

A good friend would have cleaned up all the Dr. Pepper on the floor first.

So my hair is pretty long. My friends used me as a mop to clean the wet floor. It was a fun idea. Wasn't fun, but remembering it is. - Senpaihentai_

Very interested to learn what specifically was dared and what was improvised in the moment...

My two straight, male friends got in their underwear and scissored each other while singing “fancy living, here we come!" from Spongebob. This is so weird, but this is my exact fetish.

I'd dare this guy to be my mentor.

I dared a friend to submit an application to a job she was scared of applying for because she felt she was under-qualified. She ended up getting it and was really happy I gave her the push to get her to do it. Even though the thing didn't happen to me it was still a nice feeling having something good happen to someone because you dared them. - -eDgAR-

If it involves Swiper, I'm out.

I was dared to read Dora fan-fic out loud. - khang251 But don't forget, sometimes reading fan-fic inspires a reader to write themselves. I imagine this Redditor is secretly a young JK Rowling. Wait, no, those timelines don't match at all. Never mind.

Using mouthwash before Truth or Dare is as important as stretching before a run.

One of the really hot girls there was dared to (without her hands) take the Invisalign out of the guy's mouth she was sitting next to and have it in the entire night. Everyone went quiet and looked at her. Without hesitation, she grabs the guy and with her tongue takes it out of his mouth and into hers. She was supposed to keep it in the rest of the night, but it didn't fit her properly and she only had it for about 30 minutes. - IgniteCookies And after those 30 minutes, her teeth were perfect.

They can't all be fun.

Nothing good has ever happened playing this game. One time it ended with me licking a toilet seat I hated it. - NaddaNinja Remember, you're always allowed to leave mid-Truth or Dare.

I like the "Little boy blue and the man in the moon" part.

We dared this girl to give a friend of mine a lap dance using the first song that came up when he shuffled his entire song library. Seems pretty normal until she had to give a 3-minute lap dance to "Cats in the Cradle." And the best part? Afterward, everyone in the room called their dad and reconciled.

The tale we've all heard a hundred times, but with a twist.

Found out a girl had a crush on me. Unfortunately it was the girl I hate. - kanani_shindiru And now, this Redditor knows exactly what he's looking for in a relationship. What a win!

Some dads take better care of their hair than others, and they deserve to be commended.

When I was 10 or so, I dared a friend to run his fingers through my dad's hair while he slept. He had to continue until my dad woke up and said something. Then he was only allowed to respond, "My, you have a luxurious head of hair." God, I was a strange child. - dronesoverbrklyn Um, agreed.

Won't somebody please think of the slugs?!

My road gets particularly infested with slugs when it rains for some reason and has no street lighting. The dare is to sprint barefooted down the road for 100m without stopping. An unlucky person may squish up to 15 slugs with their bare feet. The screams don't even get quieter the further away they get. - f*cktheocean

This is playing Truth or Dare on expert level.

Prearranged dares. "Lets play Truth or Dare tonight. If you dare me to kiss Mike I'll dare you to kiss Brian." Win-Win. - K8771 It's always so crazy when your friend is into Brian when Mike is clearly cuter.

This is a nightmare.

"What truth about yourself would make us judge you the most?" - hardcorr I see this Redditor was playing Truth or Dare with evil genius Lex Luthor.

"And make it loud enough for the neighbors to hear!"

Dare: roll down the driveway in a sleeping bag yelling "I'm a giant burrito, the kind you like to eat-o." - jasmineareno Truly, they were a modern-day Paul Revere.

They have some sharp corners.

I once dared somebody to punch a Lego like it was trying to kill them. They did it, and that was the end of that game. - NOPE5390 At least they got to go home early?

Oh man, I've got them. Dares: Have your eyeball licked. Superglue your hand to your own butt. Put someone else's hairbrush into your mouth. Rodeo a body pillow down a staircase. Pick up a set mousetrap using only your pinkies. - indridcold137 I'm gonna be honest, I think could do all of these. Not scarred for life yet? If you dare, read these totally bizarre, sometimes sad, occasionally hilarious and always shocking confessions from people just like you. In fact, one of these might even be from someone you know.