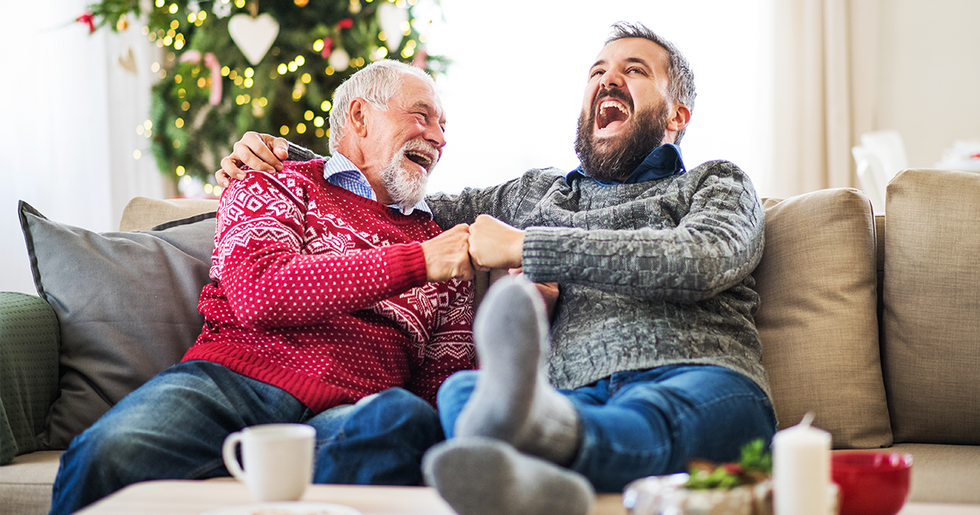 Tumblr is often a weird and wacky place, but there's no denying that it's got some of the best generational humor out there. Case in point: Christmas is on its way, and users on the website were ready with some choice Tumblr Christmas jokes that'll give anyone the ho-ho-hos. Sometimes, the key to the Christmas spirit lies in humor and the ability to make other people laugh. After all, what's merrier than laughter?

From observational humor (and you won't believe some of the things people observe) to grade-A Christmas puns, these jokes are guaranteed to spread some jolly. And one thing is for sure: you'll never think of Santa Claus without laughing ever again! So check out these Tumblr jokes about Christmas.

First, there's this illuminating revelation about the Grinch:

Okay, this was really a plot twist.

Not gonna lie, they definitely had me fooled. Also, that's so much effort to wrap an iPhone...but I guess some people really love a surprise!

Yep, it still holds up. Merry Christmas, everyone!

Sasha the Christmas Tiger is my spirit animal.

Look, if Santa ever feels like it's time for retirement, we will gladly accept presents from Sasha the Christmas Tiger instead.

The struggle is real.

And then as soon as January 1 rolls around, you remember ten other things you wish you'd asked for!

What a haunted pupper.

Is it just me, or does this dog look like it's trying to embody the Ghost of Christmas Past?

You see that face and you know what's up. Mostly because that baby Grinch face is both weirdly cute and horrifying.

Christmas in a nutshell.

Bet you never put "Santa Claus" and "Stranger Danger" together in the same thought before, did you?

Look, it is totally illegal to park on someone's roof. Santa better watch his step!

Baby, you're a firework.

Sooner or later, all the classics are gonna need sprucing up. We can't keep singing the same ol' "Jingle Bells" for all eternity!

Uh, look, Santa is just this ageless magical guy who lives in an otherwise inhospitable land and somehow delivers gifts to every house in the world within 24 hours. He's not a miracle-worker!

The cursed fandoms of Tumblr:

Tumblr may be giving it, but I'm not sure I want it!

Raise your hand if you know when Christmas is!

So, "December" and "Christmas" are the same thing, right?

If this becomes an actual parody song, I'm going to cry.

We've all gotta feel that holiday cheer somehow; some people eat candy canes, others turn them into sharpened, festive weaponry.

Well, yeah, what else are they gonna be shaped like?

Please tell me whoever named this product "Bell-Shaped Bells" was subsequently fired.

Did they just poke a great big plot hole into every single Christmas movie ever?

The many forms of Santa Claus:

Ever wondered why there are so many different depictions of him? Here's one (wild) theory!

Did anyone else spit out their drink when they got to the "tender and mild" part? Just me?

When parents want their kids to behave:

In truth, there aren't many things more foreboding to kids than the "You better watch out" line in "Santa Claus is Coming to Town."

Can this please be entered into the official Christmas lore? Please?

Okay, Iceland, what the heck?!

This is honestly more gruesome than every original Grimm's Fairy Tale put together. Christmas in Iceland is dangerous.

Come December 25, Santa's done playing around with all those naughty kids. It's time for some karma.

This is another one of those classic Christmas Tumblr posts. You're guaranteed to see it at least once a year!

The four moods of Christmas:

You might think the Grinch and Scrooge are the same, but they're totally NOT.

Not even when it burns down 27 times in a row. Swedish wooden goats are FOREVER!

Every baby gets its Christmas wish, even the adorable wrinkly and green ones.

Something about a big tall climbable green thing covered in swinging colorful balls and bells is just so appealing to cats. I wonder what?

It's all about perspective.

The Polar Express: the same thing as a normal trainwreck, but with lots of hot chocolate and mistletoe.

Check out this amazing Christmas card:

This year, get your friends the gift of holiday judgment! (Or, conversely, a really good laugh.)

Nobody wants to say it, but Rudolph the Red-Nosed Reindeer had a super rough childhood!

Could you have gone and lived a happy life without knowing that? Probably. But I had to read this post with my own two eyes, so you do too!

When you put it like that, we are kinda stealing the birthday body's thunder by giving all those presents to each other!

But there's just something so cathartic about a Christmas song where you can scream "Merry Christmas" into another person's face! Spread the Christmas spirit by sharing this story with your friends!