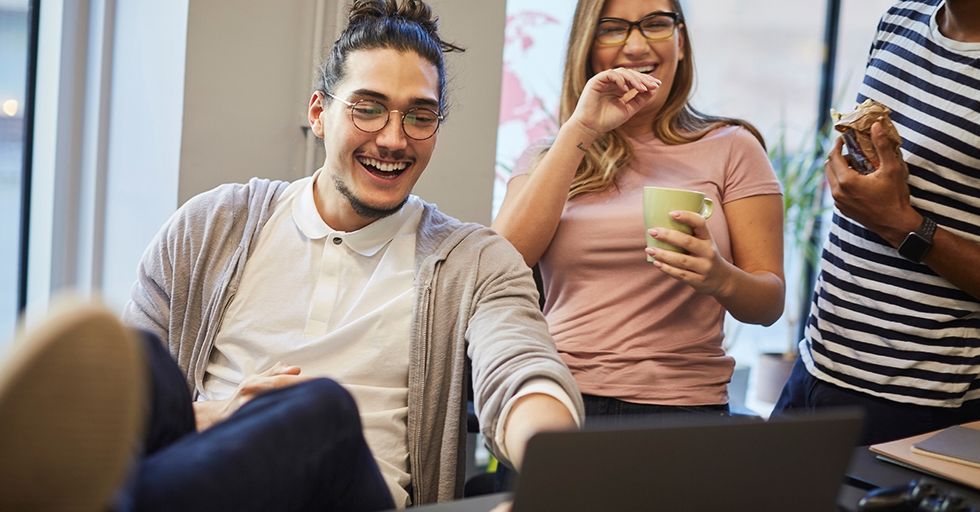 Sometimes, the time you spend on the Internet can make you feel angry, hurt, or confused. After all, there are plenty of people who seem to be focused on making others' lives more unpleasant, and the Internet is a convenient tool that can be used to do that without even getting up from your desk. Other times, the content you find on the Internet may completely surprise and delight you — that's definitely what we aim to do here on 22 Words.

When the Internet isn't making you feel like crawling into a hole and avoiding all of humanity or making you feel happy just to be alive in this wonderful world, it's great for reminding you of things from your childhood which you had previously completely forgotten about.

There are millions of other people on this planet who grew up at the same time as you did, and a bunch of them are on the Internet, sharing memories and pictures that will instantly tickle your nostalgia bone and make you long for the good old days. Here are some of the most nostalgic posts from Tumblr!

Do you remember where you were when you discovered the Papyrus font? I do. I was in my elementary school computer lab working on a PowerPoint presentation about giraffes. It was a good day.

Sure, the markers only lasted for about 13 seconds. But for those 13 seconds, you were an artist.

I always thought that everything seemed more fun back in the day. Turns out, it wasn't just because I was a child. Things really were more fun.

No Tick Tock Clock levels? How can that be?

We have clearly entered the darkest timeline. How do we keep the Sonic movie from happening? Or can they maybe just replace Sonic with Stuart?

We also need to bring back the Scholastic Book Fairs. I realize they still have them for kids, but I want them for grown-ups.

If anyone tries to tell you that the '90s weren't a bizarre time, just show them this picture. That should jog their memory.

This one hits a little too close to home.

Hey, Tumblr! I was just trying to have a nice couple of minutes on the Internet! I did not sign up for this feels trip.

Everything about this screams "The '90s." It doesn't matter that the picture was taken in the 2000s.

My family's first "computer room" was actually a closet. A small closet. If you wanted to check your Juno email account, you had to deal with the sweltering heat of a gigantic modem in a teeny closet. It was totally worth it, though.

My little brother actually tried to claim that the green ketchup tasted better than regular red ketchup. Even then, we knew he was very wrong.

I can hear it!

If you don't understand what this is referencing, it may actually be for the best. I just rewatched the video and I can't for the life of me understand why we were all obsessed with it.

Why does this picture so perfectly encapsulate every boy I had a crush on circa 2003??? This is getting a little too personal, Tumblr.

Or, you know, just all of middle school. And the rest of my life, too.

If you can't see the literal stink lines coming off of you like they do in cartoons, you're not wearing enough Axe body spray.

Yeah, I went through D.A.R.E. They didn't have a segment on Mr. Sketch scented markers, though.

"You like our show Friends, right? Well, what if I told you that there was a new friend waiting for you in this video? It's Windows 95! And we can't wait to tell you more!" –A line that I am assuming is in this video.

OK, but why is no one obsessed with Britney Spears or arguing about which Backstreet Boy is the cutest? What's up with that, J.K.?

And speaking of boy bands...

I wish I could unsee this. But I can't. I cannot. I have tried.

Why did we ever say "Bye Bye Bye" to frosted tips? Someday, everyone will be pointing to pictures of frosted tips and saying "I Want It That Way."

Wow, it's getting hot in this corner of the Internet. About 98 Degrees hotter than you might expect!

There's nothing shameful about crying when you think about The Iron Giant. In fact, it's probably more shameful if you don't cry.

Reading this made me immediately stand up and jump. I regretted it instantaneously. There's a reason I stopped jumping.

Um, excuse me, you're talking about the film Smart House and it was easily the best Disney Channel Original Movie of them all. I was so jealous of the little sister's computer closet. And those snacks that came right up out of the kitchen counter!

You also don't remember trying to play your Game Boy by the light of the intermittent street lights while you were sitting in the back of the car. You obviously lead a charmed life.

This was followed immediately by your parents yelling at you to turn down the TV. Which you were trying to do.

I still have so many phone numbers of my childhood friends memorized. There's no reason for them to be in my brain. But they are.

I remember a lot of things from my youth. Few things sting quite as much as the memory of losing this game every. single. time. Share this with a childhood friend!
20%