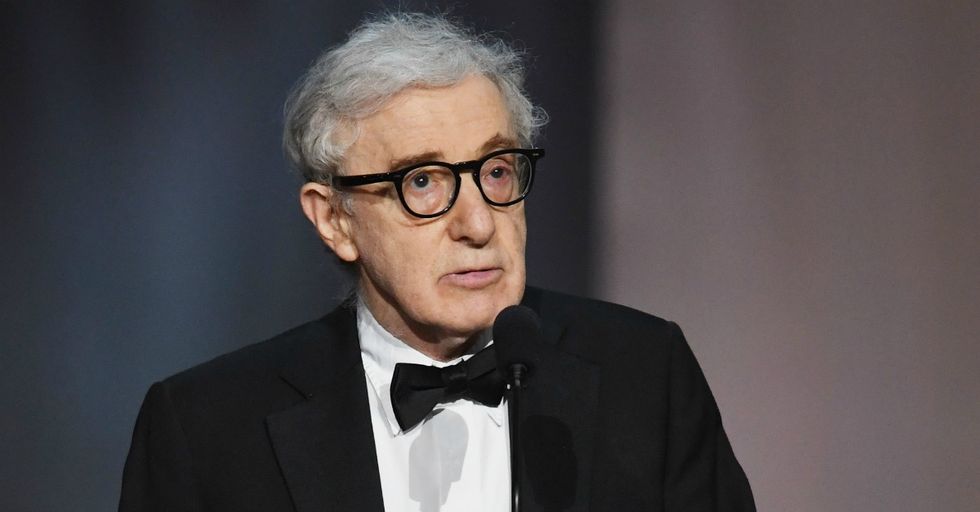 And the icks just keep coming.

Oscar winner Woody Allen has a new movie coming out called A Rainy Day In New York. It's a very Allen-ish movie. Stills already show varied actors and actress in varied trenchcoats. The actresses are all young and ingenue-ish, the actors (with one notable exception) are old and nebbishy (as actors tend to be depicted in Allen films, regardless of their actual level of hotness).

There's also one other obvious Allen-ism. You'll never guess what it is...

Did you guess pedophilia? Then you would be correct! That's right, Allen depicts a "relationship" in the film between a man in his 40s and a 15-year-old girl.

While the movie's plot has not been divulged yet, one thing is clear, there's going to be an icky, icky exploration of "love" between a 44-year-old man, played by Jude Law, and a 15-year-old girl, played by Elle Fanning, who, for some reason is referred to as his "concubine."

Now, the more romantic minded of you might be saying, "but Allen always has May December relationships in his work, it's romantic."

Miss us with that, seriously. Hard pass on the notion that a teenager can consent to a relationship with an adult nearly twice her age, or worse, that it can be romantic. There's a word for adults like that – it's pedophiles.

Also, as a helpful reminder, Allen has long dodged allegations of pedophilia and sexual assault.

Can you imagine knowing the things ppl say abt you, let alone that they're true, & STILL writing this into ur movie? https://t.co/4kvcGTdiaG
— rach gonzalez (@rach gonzalez)1508824907.0

Remember when he left Mia Farrow for her adopted daughter Soon-Yi, with whom he had started a relationship when he and Farrow were still together? Yeah.

He even spoke to NPR about his "romance," and his own words will give you spine-tingling shudders.

“I’m 35 years older, and somehow, through no fault of mine or hers, the dynamic worked," Allen told NPR. “I was paternal. She responded to someone who was paternal." “She deferred to me, and I was happy to give her an enormous amount of decision-making just as a gift and let her take charge of so many things. She flourished. It was just a good luck thing." Excuse us while we gag.

There were also the allegations that Allen had molested his adopted daughter Dylan Farrow when she was only 7.

The details are repugnant and damning. Even more so are the actions Allen took afterwards: He attempted a smear campaign of Mia Farrow, saying she forced Dylan to speak out against him in revenge for his marriage to Soon-Yi. Also, after his own biological son Ronan Farrow wrote an article condemning him in The Hollywood Reporter, he had the publication banned from his event at the Cannes Film Festival.

The point is, the rumors surrounding Woody Allen have been skeevy for years, and so has his questionable quest to normalize what looks very much like pedophilia. And people are noticing.

Imagining Woody Allen making an indiegogo for his next movie is the only thing getting me through today.
— dave horwitz (@dave horwitz)1508795715.0

Twitter user @Dave_Horwitz, for instance, posted a thread wondering about the amount of complicity it takes to make a Woody Allen movie.

The pitch for the movie, for instance, immediately seems grotesque.

But of course, there are people who don't seem disturbed by said ickiness. Take, for instance, all the actors and actresses that act in a Woody Allen movie – especially the male leads playing morally compromised characters.

There's also, of course, the film's financiers, who are the largest enablers.

@Dave_Horwitz cleverly points out the moral shenanigans here, highlighting the fact that producers literally have to dodge difficult questions, which means they fund Allen movies knowing what they're getting into.

So this whole "A Rainy Day In New York" business?

We're gonna skip it and Manhattan and Husband and Wives. Heck, let's add Vicky, Christina, Barcelona, and Annie Hall to the list, because even though they're great movies and (somewhat) age appropriate, we're just gonna go ahead and cancel our Woody Allen subscription. For good.