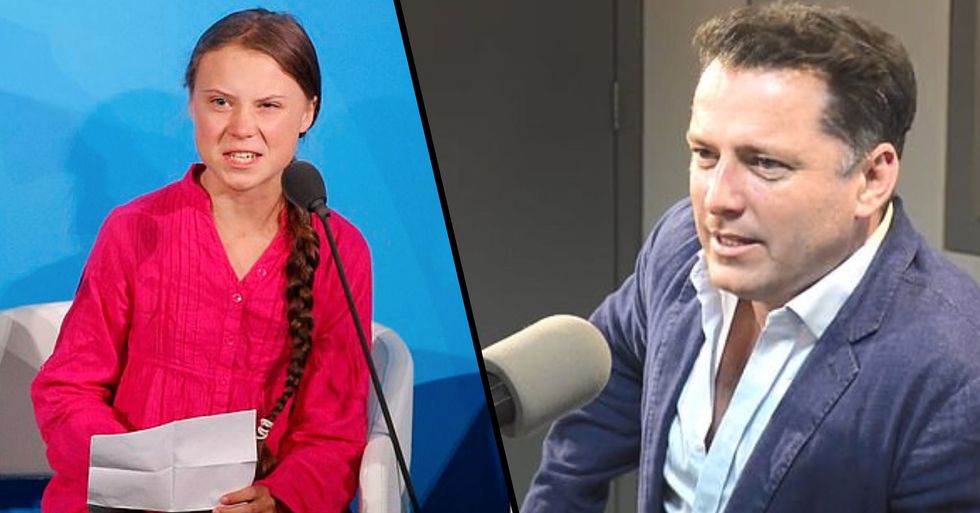 "How dare you!" were the poignant words of pioneering climate change activist, Greta Thunberg, who addressed world leaders at the U.N. Climate Summit. Her powerful, stinging speech brought home the reality of the sheer ignorance of our world leaders when it comes to climate change, and their inability to do anything about it, or even see it as an issue in the first place.

But one "guest" on Fox News didn't seem to think so. And now another TV host has stuck their oar in.

While a little over a year ago, the name "Greta Thunberg" was relatively unknown, now, hers is the first name that springs to mind when you think of the climate change movement.

Powerful, isn't it? We think so.

But it seems as if this guest on Fox News is following in his president's footsteps.

Instead, he opted to diagnose the sixteen-year-old, calling her a "mentally ill Swedish child." The Daily Wire’s Michael Knowles joined a host of other personalities in what was supposed to be a discussion of Thunberg's speech as well as climate change in general.

However, it seemed to spiral into a direct attack on the activist.

Knowles was joined by anchor, Harris Faulkner, and liberal commentator, Christopher Hahn, when he said: “If it were about science it would be led by scientists rather than by politicians and a mentally ill Swedish child who is being exploited by her parents and by the international left." For the record, Greta has autism, but she refers to it as her "superpower."

This statement immediately made the others pipe up against him.

However, Knowles didn't give up his view despite being asked to "take it back."

He further repeated his previous statement, saying that the left was: "exploiting a girl with many mental illnesses." Just say you're jealous of what she has achieved in only sixteen years while this is your claim to fame, because we're all thinking it...

Don't be fooled, some people may look like adults, but they haven't managed to shake off their childish habits.

The news channel has since apologized to Greta for Knowles' comments, saying they were "disgraceful." They also said they never plan on booking him as a guest again. Thank God! But now even more grown adults have joined in on the attacks.

Host of Australian Today show, Karl Stefanovic. When hosting a radio program on Tuesday afternoon, he didn't hold back when it came to the teenage activist.

"She's being managed and her stance is being used by activists."

"She was very fired up, wasn't she? I thought, 'What are my kids doing on school holidays next week?' Not doing that."

When ex-Australian Prime Minister Kevin Rudd spoke out in support of Thunberg, Stefanovic hit back, "Kevin Rudd, give it a rest. There's anger out there - but there's anger at this kind of activism as well."

Latham was again critical of Thunberg's approach, saying she "got carried away," and calling her "overdramatic." "I think that's the case," Stefanovic agreed.

Thunberg seems to be angering all the right people - which probably means she's doing something right. Unlike a different climate change activist - who has a much more controversial plan to combat climate change. Confused? Keep scrolling.