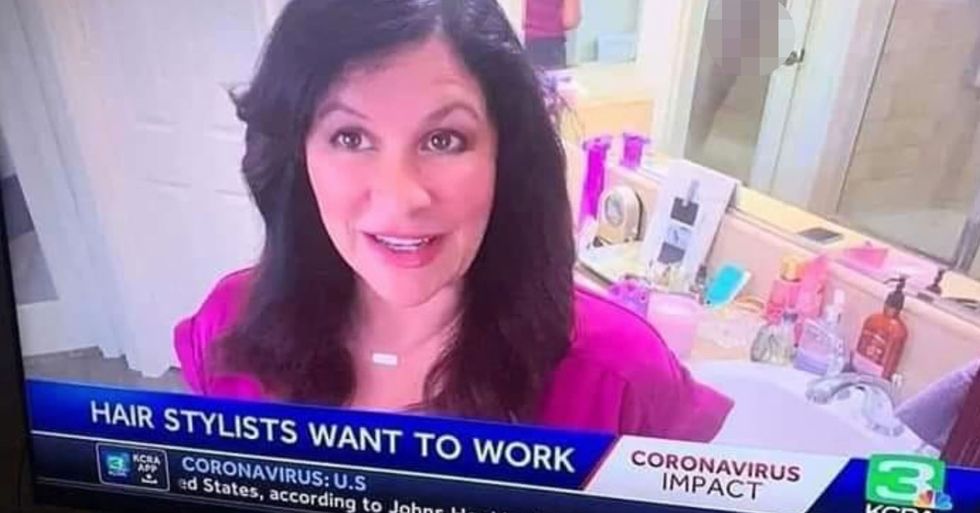 A TV reporter gave people a lot more than they had bargained for when an awkward angle meant that she had broadcasted her naked husband having a shower on national TV.

Keep scrolling to watch the hilarious clip that left us all reaching for the remote...

Well, one reporter suffered the most awkward technical error while she was live on air... And it has left the whole nation in stitches.

This is Melinda Meza.

A news reporter for KCRA TV which broadcasts all over the nation.

Typically, she uses her platform as a journalist to tell some hard-hitting stories.

From raising awareness about bullying in schools, all the way to providing her viewers with emotional tales, Meza has always been pretty professional in her role.

However, this major blunder might have changed all that...

Due to the ongoing pandemic, we know most people are stuck at home and that isn't any different for reporters. But one would assume you would take all precautions necessary when broadcasting from within your home...

She threw caution to threw wind as she set up her camera in her bathroom... Strike one.

She then proceeded to angle it so that it was pointing at the mirror...

Strike two. I don't really think she understood how reflections work. Just because the camera isn't pointed directly at something, doesn't mean we can't see it, Melinda.

If you know your husband is ready to have a shower during filming hours, you would kindly advise him to have it after the broadcast is done. Or, I don't know, maybe just film elsewhere? But Meza clearly didn't think this one through.

And that led to her viewers getting more than just styling tips...

No one could believe what they were seeing. It might have just been a quick fifteen seconds, but they changed everything.

As she cut her own bangs in front of the mirror, she said this:

"So people won't have to do 'this' much longer... In Stockton, Melinda Meza, KCRA 3 News." She was completely oblivious that her husband's lower regions were visible to everyone... Everyone.

"Oh, she is brave..." Her colleague stated after they witnessed the clip.

Or very careless. Of course, everyone was trying to stifle their laughter but it was pretty hard not to chuckle given the circumstances. Keep scrolling to see the funny clip.

It has been the talk of the online world...

The responses have been almost as hilarious as the actual video itself, with many users left speechless.

This user could only use gifs to describe their emotions...

Very appropriate for this situation.

And this user reiterated Meza's colleague...

Even Hercules is shaking...

I wonder how her man feels...

Mike de Lambert has yet to comment on the awkward moment.

But once he sees these comments...

It'll be pretty difficult not to.

Others questioned if it was actually her husband...

Oh, that's a whole other path we don't want to go down... Yikes.

Let me know when you see it...

And a close-up of the image in the background...

I'm sorry to have scarred you like this, but at least you saw the censored version... My eyes, on the other hand, there's no coming back from that. If you want to see more risky photos, read on to see Ansel Elgort bare it all for a good cause...