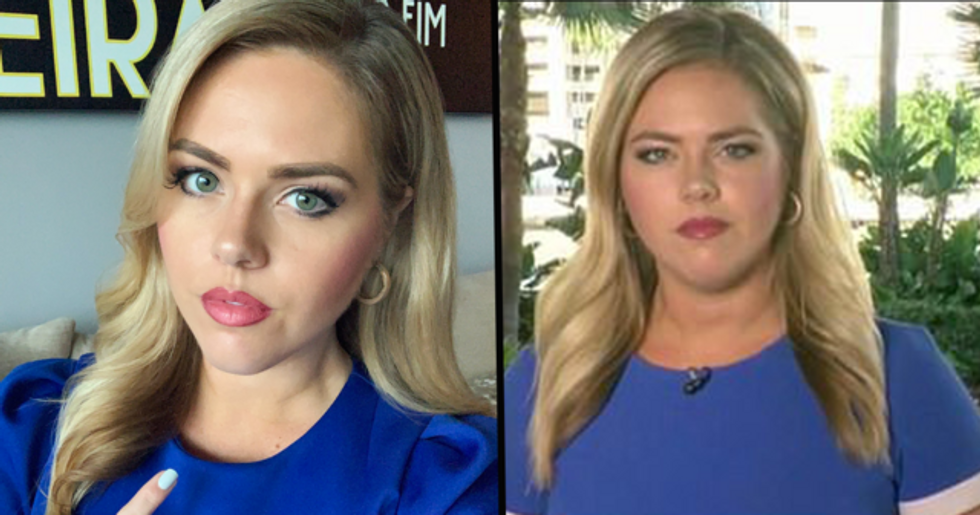 TV Reporter Thanks Viewer Who Spotted an Undiagnosed Cancer Tumour

A Florida news reporter has expressed her gratitude to the viewer who alerted her to an undiagnosed tumor, prompting her to go to a doctor and, ultimately, save her life.

It's a tragic reality that around 9.6 million people died from cancer last year.

Every sixth death in the world is due to the disease, making it the second leading cause of death.

This is a very personal topic for many...

As nearly everyone knows or has lost someone dear to them from this devastating illness.

Cancer is a cruel illness...

And the chance of a person - no matter how old they are - losing their life is scarily high.

But, if cancer is caught early...

The chances of survival are significantly higher.

One TV reporter recently proved this...

And it was all thanks to an eagle-eyed viewer who was watching her on TV.

Victoria Price is a newsreader for WFLA-TV in Tampa, Florida...

And her life was saved after a live broadcast last month.

Price had recently been promoted to investigative reporter...

And, thanks to the coronavirus pandemic, she had been working "never-ended shifts in a never-ending news cycle."

So, as a result, her health was the last thing on her mind.

"As a journalist, it's been full throttle since the pandemic began. Adjusting to remote workflows and in my case, taking on a new investigative role. We were covering the most important health story in a century, but my own health was the farthest thing from my mind."

Thankfully for the young journalist, however, an eagle-eyed viewer was at hand.

Unbeknown to Price, she actually had a tumor growing in her thyroid and, unbelievably, one of her viewers spotted it.

She shared a screenshot of the email she had received.

It read: "Hi, just saw your news report. What concerned me is the lump on your neck. Please have your thyroid checked. Reminds me of my neck. Mine turned out to be cancer. Take care of yourself."

After reading the email, Price decided to get a professional opinion...

Where it was confirmed that she did, indeed, have a cancerous tumor in her neck.

Now, some people were a little confused as to how Price hadn't noticed a tumor on her neck.

But a thyroid tumor can be a little more subtle than you'd think.

Price shared a screenshot from the report, where an odd, barely noticeable lump was visible on the left side of her neck. She wrote: "Not the easiest to see. It's not super obvious unless you know what to look for."

As a result of the pandemic, there was a delay in getting Price booked in for surgery...

But, on Monday, she will be having the tumor, thyroid, and a few local lymph nodes removed.

The severity of her tumor is currently unknown...

But she is feeling hopeful, explaining: "Doctor says it's spreading, but not too much, and we're hopeful this will be my first and last procedure."

In the days leading up to her surgery, Price decided to share a word of thanks to the anonymous woman who technically saved her life.

"Had I never received that email, I never would have called my doctor. The cancer would have continued to spread. It's a scary and humbling thought."

She says she is "forever thankful" for the email...

"I will forever be thankful to the woman who went out of her way to email me, a total stranger. She had zero obligation to, but she did it anyway." She then referenced WFLA's iconic catchphrase: "Talk about being on your side, huh?"

She signed off by telling her followers that she will be off work for a while...

And added: "The world is a tough place these days. Don't forget to take care of yourself. Take care of each other. Love y'all and see you soon. VP."

Since her post, the love and support have been flooding in...

For more wild diagnosis stories, keep scrolling to see the horrifying moment a news reporter was diagnosed with cancer live on air...