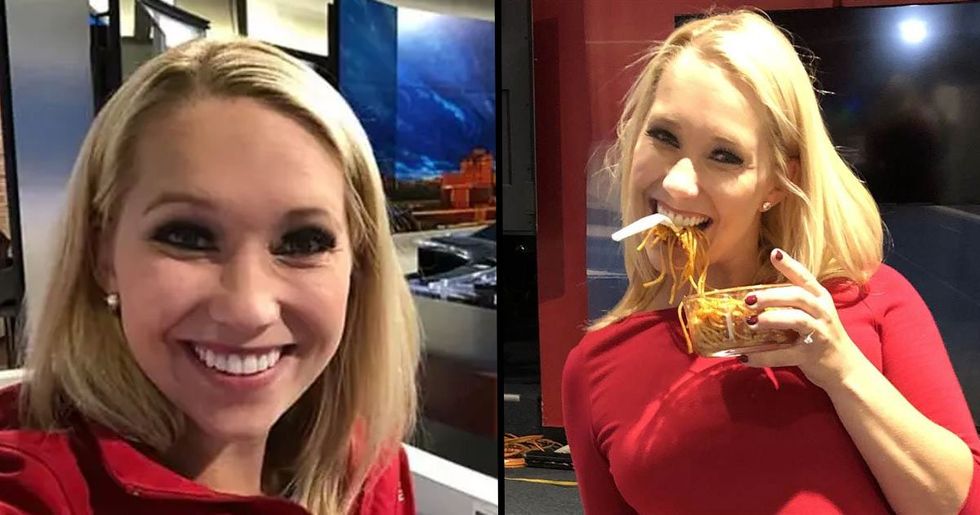 Tracy Hinson, a weather reporter for St Louis' KSDK wasn't about to let a troll get the better of her.

The popular TV meteorologist was shocked when a viewer only known as Mary sent her a scathing email.

Mary decided to reach out to Hinson to let her know her stomach had been protruding out of her dress.

Mary took offense to the weather reporters' body confidence and intended to make her feel ashamed.

The email had the opposite effect and Hinson decided to hit back on the troll on social media.

Macaroni-cheese-loving Tracy declared to the world that she was not about to diet to make viewers more comfortable.

All power to her!

Tracy Hinson is a ray of sunshine.

The weather reporter is popular with viewers on St Louis' KSDK channel. Her cheery attitude is exactly the kind of thing people want when tuning into the weather.

Even when the weather is reaching extreme temperatures...

Tracy Hinson manages to make viewers feel okay about everything.

Tracy is also a self-acclaimed foodie.

This is one weather reporter that appreciates tasty food.

Which was why Mary's comments were even worse.

Hinson is proud of sharing her eating habits with her fans and never shies away from admitting she's a carb fiend.

Tracy was not going to let a troll win.

After receiving the scathing email from Mary, she took to Twitter to defend herself.

The internet was on Tracy's side.

After Tracy hit back at Mary, fans of the weather reporter poured in.

Those that saw her tweet were deeply touched that she stood up for herself and defended her body positivity.

Tracy restored the appetites of her fans.

In a political stand against fat phobic Mary, many of the people responding to Tracy declared they would eat carbs that night.

Tracy isn't going to stop eating mac and cheese for anybody.

Heck, she's even got her own special mac and cheese spoon. Now that's dedication.

Tracy's post incited a lot of interesting hashtags... including #nogirdledneeded, which was in response to Mary's assertion that Hinson ought to start wearing girdles when presenting her weather reports.

What's a girdle you ask?

It's basically a contraption used to bind the stomach, giving one an appearance of a flatter tum. Now frankly, I think girdles sound awful. I bet you a pretty penny anyone that wears a girdle must suffer from chronic stomach ache.

Why make yourself miserable when you can eat carbs and be happy?

The days of the skinny b**ch rule are over.

This isn't the '90s anymore... In 2019 we embrace body positivity and celebrate carbs. Women will no longer accept that it's only men that can have a tum. Eating is for everybody.

Women are no longer afraid to eat what they want.

Thank god that the days of Diet Coke and girdles are behind us.

Female television personalities have forever been the victims of body shaming.

For some reason, people think if a woman is on television she must meet unattainable standards of beauty, have the perfect hair, height and size. A size (might I add) that is completely ludicrous for a grown woman to be.

"I love your spunk."

It seems Tracy's body confidence is rubbing off on other female television personalities. By hitting back at Mary the body shamer, Tracy opened up a discourse of the kind of cruel comments other women have had to put up with.

Tracy is the mac and cheese queen!

Some of her fans were even offering to buy her some of her favorite carbs. You know, I wouldn't be surprised if after this she gets a sponsorship deal with Kraft.

And melted cheese between slices of bread? Now you're talking!

Ever tried a grilled mac and cheese toastie?

Boy, if not you really haven't lived... These bad boys are where it's at. I'm sure Tracy would agree.

@tvalwx Although it’s tough to see that nothing has changed in 30 years (do they still comment on your wardrobe, ha… https://t.co/GFjM3pRZey
— Kimm Viebrock (@Kimm Viebrock)1570978648.0

Sadly, as Tracy's body-positive post highlighted there are still plenty of people that are stuck in the dark ages of body shaming women.

Won't someone get Mary some lasagna?

Surely if fat-phobic Mary had some really nice lasagna she'd understood that a bit of a tum isn't such a bad thing? Carbs won't kill you, Mary!

We'll have to pull out the big guns and introduce Mary to lasagna pizza. Now if that doesn't win her over then we may as well just give up on her completely! Continue scrolling to read about the pregnant weather reporter who hit back at body shamers live on TV. Can you believe some people's audacity!?