30 Captain America Tweets We Have Laughed At | 22 Words 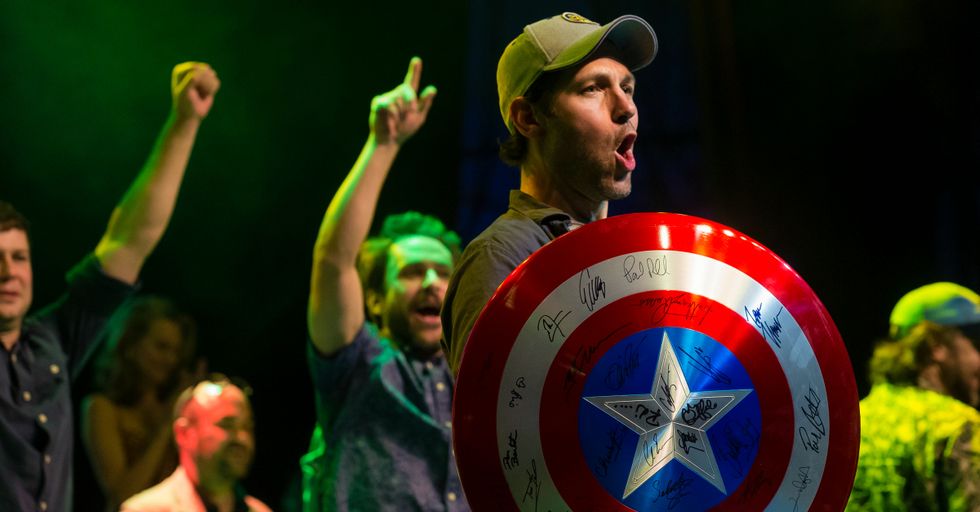 30 Captain America Tweets We Have Laughed At

Actually, this article might not even be for the people who read the comics. We dived into the world of Twitter and looked at the stan culture that revolves around not only the comics but more so, the films, which stars Hollywood’s favorite man, Chris Evans.

Chris Evans has brought such life to everyone’s favorite star-spangled hero, and Twitter makes us see that in the most hilarious way. Between how the character is written, and how Chris Evans’ portrays him, there are so many tweets that will make you just die of laughter.

Which Film Is It?

The beauty of this tweet? It can literally be any of the Captain America movies. Seriously, he breaks the rules all the time for his best pal. Bucky Barnes is one freaking lucky guy.

First of all, if you haven’t seen this meme I’m not too sure what you are doing. Secondly, yes, Sam Wilson should take over. Bucky Barnes suffered for 50 years under HYDRA, the boy deserves a damn break!

Okay, so Captain America and Chris Evans (obviously) both have a very specific body shape. It’s a Dorito body shape. Seriously, go look at photos of him, full body shots, and see how right the internet is.

Anyway, full offense, whoever doesn’t acknowledge the fact that Bucky Barnes and Steve Rogers are more than just friends need a serious reality check. Come on, we all know there is something deeper than friendship there!

We all do it. We all have those movies that we KNOW will break our hearts every time we watch it, but we just can’t seem to get away. But hey, at least we know it, right?

There is so much drama with the new Nike ad and spokesperson Colin Kaepernick. But we know one thing for sure: Steve Rogers would love a man like Colin. They have the same values, after all.

It is actually not the first time this has been said. A lot of people are comparing good ol’ Christopher to the late Reeve. He has become Steve Rogers in every possible way, and the whole world can see it.

Avengers: Infinity War destroyed a whole fandom. There are questions as to whether or not we will survive the next movie. The music was as daunting as the film, and since people think Steve might die, this could be a possibility.

How To Say I Love You

There are a lot of different ways to say "I love you." Steve Rogers, ever dramatic, had to say it in the most adorable way possible. Actually, not adorable, but emotional and heart-wrenching. Seriously, what a scene.

Another option title for the movie: Brokeback Mountain 2. Sure, they weren’t on a mountain, but they were on a hill at one point, weren’t they? Either way, the relationship between these two has fans giving their heart eyes.

LISTEN. We all want it. We all secretly hope that Chris Evans is literally Steve Rogers and that he is about to step into the White House at any given moment to take Trump down. We can only dream.

Come on, we all know it’s true. Chris Evans DRAGS people on Twitter literally every other day because of their insane political views. There is opinion, and then there is ignorance, and Chris Evans doesn’t stand for that bull. Just like Cap.

The Crossover We Deserve

As most people know, The X-Men are all an allegory for both racism and the experience of LGBT people who have to stay in the closet. Steve Rogers is a man who fights for the rights of everyone, especially those who can’t fight for themselves. Of course, the X-Men would love him.

Okay, whatever you say, CA:WS will always be a classic. There is no way to escape it. It is what it is. It is one of the best movies in the MCU, and it addresses politics and the war on people in the most amazing way. Plus, come on, it has Bucky Barnes.

Okay, so maybe as a fandom we are a bit over dramatic. But come on, haven't these guys suffered enough? It's time for them to take a break and let the new kids pick up the slack!

So, Civil War is kind of a mess. There is a lot of stuff happening and a lot of bad blood between Tony and Steve. And really, none of it gets resolved because they're both too stubborn to just talk about their feelings. Boys.

Okay, seriously, even people who don't watch the Marvel films had to give it up for Steve Rogers looking oh-so-fine. He is supporting a whole look, he is everything people wanted, come to life. My God.

Let's be honest, the world has taken some intense hits this year. It's not easy, but we're powering through. But how better would life be if we had a real-life superhero to clean up other people's messes?

Plenty of people think Cap is too boring for them, but since when does a good man = boring? Winter Soldier is one of the best MCU movies, and this is the reason as to why. We see just how amazing Cap really is.

Some comic book fans are the worst people ever, seriously. They think they are cooler than anyone else and are stuck in the 20s. It's time to grow up and realize that the comic books you are reading stand for something greater than you think!

Okay, in fairness to them, there is not a whole lot of talking they can do in a fight. And we suppose that they make very pretty grunt noises. That's a thing, right?

A Man Amongst Other Men

Okay, we know he looks good, but he doesn't look unrecognizable. It was probably the sheer beauty that came off Steve as he came out of the shadows. We know we gasped in the theatre when all that beauty was released.

Seriously, people on Twitter love to go off on the angst theories. The worst part is, we know that the MCU screenwriters would love to put us through this kind of pain. So we have every reason to panic.

It is definitely disheartening to watch all the Marvel movies and see that your favorite hero does not have the same screen time as the others who got their independent films. And yes, we are still bitter.

What Makes Him A Superhero

A lot of people say the serum is what made Steve a hero, but the truth is, he was a hero even before he had the muscles. What made him super was the serum, but what made him a hero, was being a good man.

Steve Rogers was born on July 4th, which makes him a Cancer. And it also makes him a deeply loyal, emotional and affectionate person. We love every personality trait about this guy.

Fans want one thing and one thing only for our old man: for him to retire with good ol' Bucky Barnes. In a house in Wakanda, just them two raising their goats. Talk about a good life.

We all love The Winter Soldier for a lot of reasons, but mostly for the bridge scene. It had the BEST fight scene in the movie and ended with the classic line, "Who the hell is Bucky?" It left us shaking in our seats.

The Man For The Role

There were a lot of skeptics when Chris Evans got announced for the role, but man did he prove everyone wrong. He has taken the part and made it his own, and we officially cannot picture anyone else as our fave hero.

The End Of The Line

What are we looking forward to in the next Avengers film? The reunion between Steve and Tony. Not only will it be iconic, but we can't wait to see them kick Thanos' butt to the damn moon.