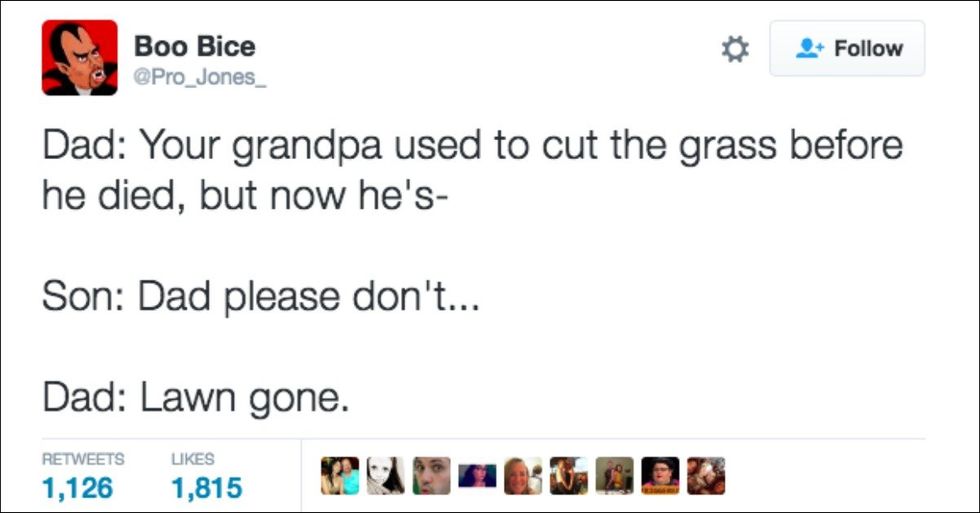 Fatherhood is no joke but in order to survive it, you do have to keep a sense of humor. And dads, God love 'em, are normally known for their corny sense of humor.

In case you need proof, Twitter offers up plenty of hilarious examples in the form of tweets about dads from those who know them best — or at least those who are smart enough to tweet about it.

It's best they learn the value of a dollar early on.

How can you not look cool in a minivan?

Genius. From now on, that's what we'll call it.

It's almost as if anything above 68 degrees sends out a dad-like Bat signal.

You can't have it both ways.

He takes after his father — for better or worse.

Better hope they only have one kid.

And sneaking back in to leave a bigger tip.

Never push down on the burgers! All the juices will run out.

Disappointed. Loved. I can see the confusion.

It's never too late to tap into that artistic side.

Plus, it's very eco-friendly.

One last pun for the road.

And he's moving really, really slow towards the grill.

There can only be one...

And they're all in cargo shorts, which makes it even more impressive.

Meeting of the Minds

The first step is admitting that you have a problem.

Is it that hard to flip a switch?

Or even shut the door? We're not made of money!

At least he died doing what he loved.

Well, at least he tried.

Don't worry. The book is always better than the movie.

At least he doesn't have to buy it shoes yet, as we know how that will go.

Puns? They're the gifts that keep on giving.

It's good to plan ahead. Hope you had a snack.

The Grass Is Greener

Get your motor running...