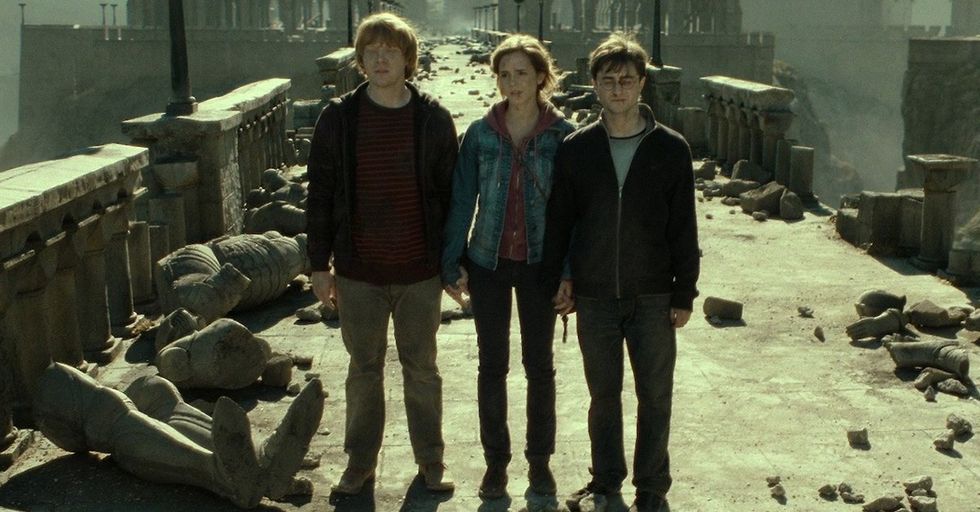 'Harry Potter' Tweets for the Most Dedicated Potterheads Among Us

The world is a pretty scary and miserable place these days, but at least there's one thing we can all agree on: The Harry Potter universe is the best thing ever. No matter how bad things get out there, you can always pop some popcorn and have yourself a Harry Potter movie marathon. Or make some tea, put on some comfy socks, and start reading the first book. Again. For the seventeenth time.

But even though it's basically perfect and we love it so so much, that doesn't mean that we can't poke a little fun at the series. In fact, making jokes about the things you love can help you to enjoy them even more than you already do!

With that in mind, we've wrangled up some of the funniest Harry Potter-related tweets of all time. And they're just downright magically hilarious.

Here they are! (Warning: After you finish reading, you might be struck with the uncontrollable urge to reread the entire series.)

I get that Dumbledore was dealing with all kinds of personal stuff throughout the series, but like...he could've helped Harry out just a little bit more?

First of all, how dare you.

Maybe Harry Potter is real and you're not. Have you ever thought about that?

As someone who had to share a bedroom for most of my pre-college life, I just have to say that I also envied Harry's cupboard under the stairs.

First of all, this is an A+ pun. Very good work here. Secondly, I don't care what you call it, but I need for this to exist.

There were hundreds of them. Just think for a second.

Is it just me, or have they left the second "e" out of "creative"? That one's obviously not Ravenclaw.

Remember how in Harry Potter, Mrs. Weasley had that clock that showed where her family was, & it stopped working on… https://t.co/VvlmB1nVF1
— Jenna Scherer (@Jenna Scherer)1530213936.0

My own hand would fluctuate pretty frequently between "mortal peril," "sleeping," and "thinking about lunch."

They don't make it easy.

Anyone who has ever struggled with a baby gate knows how real this is. Forget "a mother's love." All the Potters needed during that time were better babyproofing supplies.

Aww, poor Voldy. It almost makes you feel bad for him, huh?

As if you can't tell which answer is which.

As a Hufflepuff, I take offense here. Besides, my favorite color is yellow.

DUMBLEDORE: Hey this 11 year old is now responsible for saving us from Magic Hitler. EVERYONE ELSE: Okay.
— MehGyver (@MehGyver)1531604078.0

I mean, if it meant that I didn't have to do anything and could just continue living my life, I probably would have gone for this plan, too.

Once again. Just a hint. A little one. That's all Harry needed.

everyone in harry potter treated that blonde girl like she was crazy for believing in weird shit like they didn't go to wizard high school
— Cohen is a ghost (@Cohen is a ghost)1358044990.0

Luna: "These carriages are pulled by horse-like creatures that are only visible to some people." Everyone: "That's insane! They pull themselves! With magic!"

This is such a solid piece of advice, and I'm going to start following it, too.

Hey, Moaning Myrtle also had her good qualities. I'm struggling to think of what they were, but I'm sure they were there.

Looks like somebody's going to be sorted into Ravenclaw.

Also, why are none of the students obsessed with Britney Spears' "Hit Me Baby One More Time"? I'm going to need J.K. Rowling to weigh in on this.

He turned out OK, though.

At least I actually have something in common with Harry. That's gotta count for something.

Interviewer: Where do you see yourself in 5 years? Me: I'm shaking hands with Dumbledore, I've won the House Cup.
— College Student (@College Student)1423249311.0

If I am conducting an interview and someone says this, I will immediately hire them. I don't even care how they answer the rest of the questions.

Sure, it's short. But it also would have taken 23 years for him to finish writing it. (I'm sorry, Mr. Martin. Take your time. Love your work.)

What could possibly go wrong? What's that? Everything. Oh well!

FOUNDER OF HOGWARTS: okay, so we all know there are four types of kid. brave, smart, evil and miscellaneous. SCHOOL BOARD: yes, continue.
— Carl Kinsella (@Carl Kinsella)1470519219.0

Something tells me that this exact conversation was covered in Hogwarts: A History. Somebody ask Hermione for me.

Can you imagine traveling by train?! What an imagination that J.K. Rowling has!

This makes perfect sense. What else could you possibly want to use it for?

Not quite the same thing.

Can you imagine if Harry had to seek out and destroy seven hot guys? Then, he later he found out he was one of them? This is a completely different book series I'm writing, here.

I hope they say yes.

"Also, our firstborn will be named either Harry Ronald Albus or Minerva Hermione Molly. This is non-negotiable."

Do you think the Aurors made Harry complete some kind of internship when he first started? Or did he just kind of immediately become the Head Auror Forever and Ever?

They'll believe that, right? If not, just wait until you actually find Hogwarts.

I'm sure there's a reason for this. There must be. ...Right?

Snap into a Slim Jim.

Dear Diary: Day 41 at Hogwarts School of Witchcraft & Wizardry. So far none of the other students have noticed that my wand is a Slim Jim.
— Jamie Woodham (@Jamie Woodham)1386089192.0

However, I am becoming quite hungry every time I try to cast a spell. I fear I will not be able to keep up the illusion for much longer.

DUMBLEDORE: Now, give a warm welcome to our new Defense Against the Dark Arts professor, Lucifer Serpentine HARRY: I bet this dude is great
— Cohen is a ghost (@Cohen is a ghost)1417448754.0

I'm pretty sure the Defense Against the Dark Arts teacher could be named "I Am Voldemort And I Will Kill You" and Harry would still be like, "All right! Love this class!"

I guess there's probably some kind of magic cleaning spell, but why not just use something else? Like a Sorting Soap Bar?

You can tell a lot about a person from their Hogwarts house. And it's a much more exact science than astrology.

Enemies of the heir, beware.

*writes on wall in ketchup* THE CHAMBER OF SECRETS HAS BEEN OPENED Boss: What the hell are you doing? Me: Somebody ate my corndogs.
— Ashley △⃒⃘ (@Ashley △⃒⃘)1473715414.0

Is this a little extreme? Yes. Would it work? Probably.

The job is yours!

DUMBLEDORE: why do u want to teach defence against the dark arts EVIL WIZARD: to murder harry potter DUMBLEDORE: [not listening] ok ur hired
— Bob Vulfov (@Bob Vulfov)1472486775.0

Dumbledore cares less about the true nature of Defense Against the Dark Arts professors than Harry does. And that is saying something.

I used to like the Harry Potter characters I guess but then I found out they all married people from high school.
— Ken Jennings (@Ken Jennings)1428029527.0

Everyone knows the people who peaked in high school. ...Nobody is writing books about them.

The books don't explicitly cover this, but if you read between the lines, it's there. It's definitely there.

Again: I shared a room for my whole childhood. I could rock the alone, under-the-stairs existence.

Say it with me now: Awwwww!

In case you were ever worried that you wouldn't fit in at Hogwarts. You would. Just be the Sorting Hat.

"You kept muttering about Unforgivable Curses and Butterbeer. So weird. Anyway, you're cured. Time to go back to your aunt and uncle's house."

If anyone ever tries to pull this kind of thing on you, you should probably just cut them out of your life. You don't need that kind of negativity.

I've got some time.

And with that, I'm settling in for yet another rewatch. Good day. Share this with another Potterhead!