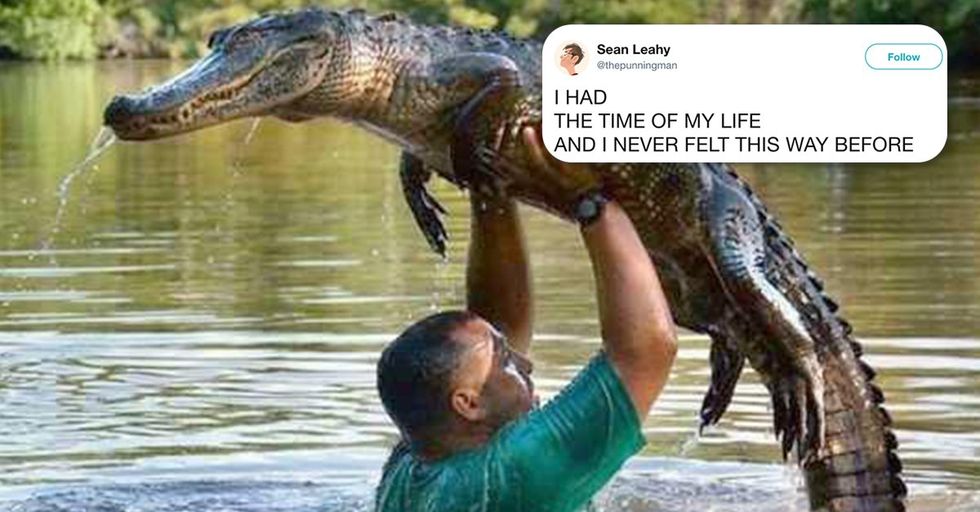 Grab some popcorn and a comfy spot on the couch because we are going to the movies! Okay, not really. At least not right this moment. But this is going to be a gallery of some of the best and funniest tweets about movies, so that is almost like watching the movies themselves.

If you are a major movie buff, this list is for you. If you enjoyed the classic animated Disney movies of our youth and the best movies of the last few decades, then this list is also for you! Movies are seriously magical in almost every way, shape, and form. They can bring you places you have not ever even dreamed of before. I think it is safe to say that without movies, our lives would be seriously lacking. These tweets about some of our favorite movies of all time will bring you back to the first time you watched them...and also maybe raise some questions we all have.

Are you a total movie buff?

I love movies so much. Most of my favorite movies are directed by Rob Reiner (The Princess Bride, When Harry Met Sally...), but I happen to love a lot of the movies mentioned in these tweets, too.

The importance of voting

This is the strongest case for voting! Seriously! He kept the beach open and didn't care if people literally got eaten by a shark.

Seriously, if you didn't have a Goonies experience of your own, did you even grow up in the '80s? What if you never wistfully walked down a set of train tracks with your friends?

If this guy and this alligator have half the chemistry of Jennifer Gray and Patrick Swayze in Dirty Dancing, they're going to be all right.

jack black: A RIGGADIDDLY DOOOOO FLEEEHUUUUOOOO 11 year old me: this is the best movie of all time
— christian (@christian)1527424863.0

Honestly, Jack Black is such a specific presence in this movie. It's a wonder we as kids were like, "Yes, sure, love it."

Wow, Beauty and the Beast just got dark. Although the suggestion that Belle's father killed her mother with one of his insane inventions is not totally out of the question.

I would watch this series in a heartbeat. That Shakespeare fella knew drama, let me tell you.

I think this person is mixing up Ratatouille and Frankenstein because the rat's name is actually Remy and any real fan would know that.

If James Bond ordered his coffee like this, every barista in that coffee shop would make so much fun of James Bond.

How can there be too many monsters in Monsters Inc.? That's one of the most delightful movies ever made!

Honestly, THIS. I couldn't make it through even the first Cars movies because I was just really confused the whole time. The ride at Disneyland is awesome, though.

This is an amazing experiment and it's the perfect random movie to do it with. So frickin' funny.

Seriously, try to put yourself in his shoes. That's a crazy feeling to have, and Danny Zuko's got the insane dance moves to prove it.

How dare this obviously overburdened mother slander the good name of the most delightful movie to be released in years?! That is, of course, until Paddington 2 came out.

Americans sure like Star Wars for something that immediately forces you to read
— Megan Amram (@Megan Amram)1450646834.0

This is a really good point! And it's not even just like one screen. It's a whole scrolling mess.

I've spent 30 years thinking about how Molly Ringwald's sushi lunch in The Breakfast Club was sitting in a warm library for 4 hours.
— Ari Scott (@Ari Scott)1408670036.0

Ugh. Now I'll never be able to watch this movie the same way again. No thank you!

This is so true. Representation matters, and it's high time that women are represented in movies to the point where our egos are bloated to at least the size of men's.

Kind of bleak when you put it in those terms, but when you think about it, it's absolutely true. Maybe her sisters had a point and she was the weird one.

Everyone knows that the first rule about Fight Club is that you don't talk about fight club! Even people who haven't seen the movie know that.

Movies your boyfriend wants to watch

This is a pretty comprehensive list, but I think it's missing a few, namely Zoom Zoom Fast Cars and Road Trip Realizations.

This is so terrifying! How do you not test what a night light looks like in the dark before you sell it to children?!

Kids today are so coddled- Elf on the Shelf, Toy Story. In my day, if dolls magically came to life, they murdered you and everyone you loved
— maura quint (@maura quint)1388076419.0

Honestly, though, this is so true. If dolls came alive in the movies of my youth, they tried to murder you (ahem, Chucky).

love how during intense moments in space-themed movies they'll show the dashboard panels, as though you'll be like ah. ah i see the issue
— tara shoe (@tara shoe)1415690090.0

Look, I wouldn't put it past an actual spider to try and put on a disguise, get a degree, and then get a job as a photographer. Those are sneaky little animals.

This is a ridiculous notion. Barges are like 40 tons. That would be an insanely large human being.

How did Buzz know?

Maybe, just maybe, he just saw what the other toys were doing and he followed suit? I don't know, man, this seems like a real hole in the plot.

Wow, you know, this is a big one. I haven't ever really thought about this. It throws the authenticity of the whole movie into question.

There is simply no arguing with this logic. This is a great point.

Okay, but if this actually happened to me I would be half amazed and half so annoyed because I would still need to get home and there's no way I'm fitting in that car.

The other option is to buy the DVD for $10 and let it rot on your shelf without ever touching it. That's what I do with my DVDs. Share this with a movie buff in your life!