These Tweets Perfectly Capture the Absurdity of Having Kids | 22 Words 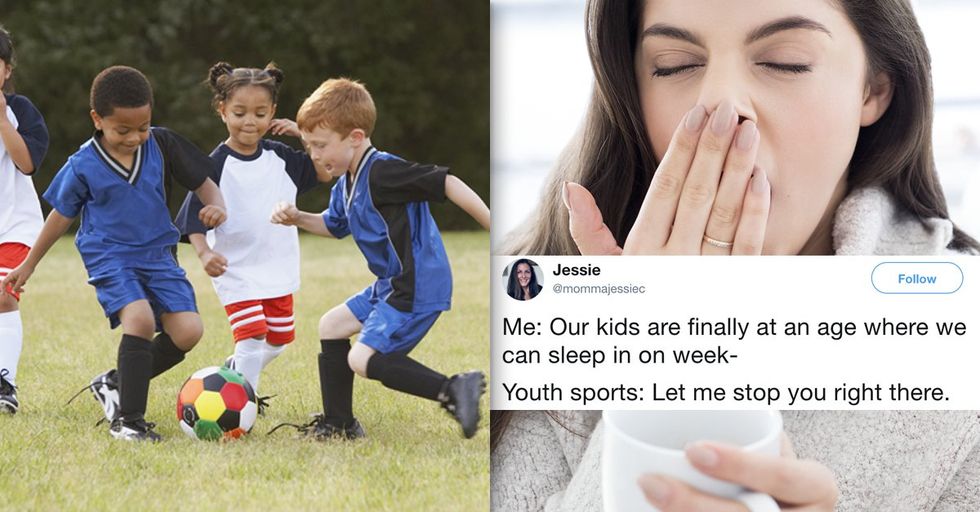 These Tweets Perfectly Capture the Absurdity of Having Kids

If you're a parent (or even just someone who works with kids on a regular basis), then you know that life with kids can be pretty darn special. Raising kids is easily one of the most important and admirable jobs in the world, and it can be incredibly rewarding. There's nothing quite as magical as watching little humans learn and grow.

It can also be downright absurd. I would say that most parents have at least one interaction per day with their kids that leaves them scratching their head, wondering how they ended up arguing with a toddler about whether shoes belong on the table. Not a day goes by that parents don't stop to marvel at how amazingly weird, and totally bizarre their child turned out to be.

Luckily, you can also marvel at the absurdity of children, and you don't even have to have kids to do it! Just read these tweets!

Something tells me that Daddy got a real kick out of that particular sticker. That one's going in the scrapbook.

Every parent gets a pass when it comes to getting the kids out of the house and off to school. Also while grocery shopping, during bedtime routines, and while stuck in traffic.

What a fun activity!

Dinner is a great time for my family to come together to tell each other exactly what is wrong with the meal I made.
— Jessie (@Jessie)1521548574.0

Everyone's always looking for the one activity that will bring the whole family together. This isn't exactly what they have in mind, though.

I appreciate your willingness to reconsider, but 30 is still way too many chicken nuggets for one meal. On the other hand, as the parent, you get to eat the leftovers.

today my eight-year-old son said ‘what if the tooth fairy was real and she was collecting the teeth to build an army of teeth-people’
— Saladin Ahmed (@Saladin Ahmed)1528639677.0

This is the truth.

There's no telling where all that tape went, but you will discover at least some of it tangled up in your child's hair. Good luck with that.

That's not how gardens work.

This is what happens when you tell kids that anything is possible. Have fun ruining their garden dreams!

My son just showed me something he made and asked “Do you like it, or do you love it?” and those are the only optio… https://t.co/lyOj3rmOqd
— AsKateWouldHaveIt (@AsKateWouldHaveIt)1526912575.0

During the day, this was a funny thing your daughter said that you didn't think twice about. At night, however, you discover that it was pretty terrifying.

This is why I'm hoping my future children inherit my complete lack of athletic ability. As well as my penchant for sleeping in.

Talk about a cheap date.

Tomorrow you can spend a few hours pushing the buttons in an elevator! Maybe we will hold off on the vacations for a few years.

My favorite thing about buying food in bulk is when my kids immediately decide that they now hate that food.
— Molly England (@Molly England)1516026576.0

This is one of the laws of parenting. Another is that they will immediately be "starving" right after they've declined their meal.

What a fun vacation!

Next time, go to the mall and ride the escalator. Trust me on this one.

Well, I admire the attempt to fix the situation. Unfortunately, it's completely unfixable.

I imagine that parents do a mental calculation every time the house is quiet, taking into consideration how long it's been quiet and how much they value their child's limbs and eyeballs.

Looks like someone has learned the perks of asking for forgiveness rather than for permission. They may have tipped their hand a bit here, though.

This is a very delicate situation.

I'm at my most hostage negotiator when I see my 3 year old holding a permanent marker without the lid.
— Simon Holland (@Simon Holland)1411325870.0

You may think you'd never negotiate with terrorists. If so, then you've never found yourself in this position.

"He was definitely born. That must count for something, right? As for when, well, I should know. I was there, wasn't I?"

Next time you think the house is a bit too quiet, sit down on the couch and try to relax for five minutes. You'll quickly solve that problem.

You will sit there and pretend to drink tea out of a tiny cup, and you will enjoy it!

If you ever see a parent on a Monday, go ahead and tell them they're doing a good job. They need to hear it.

This is actually brilliant.

Just dry shampoo'd and Febreze'd my kid on his way out the door so no I'm not really interested in your family's morning chore chart, Laura.
— Valerie (@Valerie)1506428678.0

Hey, we're all doing our best! Sometimes that means stocking up on Febreze– and that's OK.

Good thing you never make any mistakes! Other than having kids, that is. (Just kidding!)

What a fashion statement.

Your kid is upset about something that you tried to fix? That sounds about right.

Me- Sits on toilet Children - QUICK EVERYONE!! Mom called a family meeting in the bathroom!! Bring in toys, blankets and your best stories
— Cydni Beer (@Cydni Beer)1508118145.0

This is another solution for a time when you can't hear your kids. Go to the bathroom, and they'll appear in a matter of seconds.

Draw your own conclusions.

But there are good things about having kids, too! It might take me a minute to think of them, but they exist.

Don't forget all the characters on Doc McStuffins and the songs from Daniel Tiger's Neighborhood. You were cool once.

I've never been serenaded, but I have been followed through the house by someone reading me "another funny thing" from Diary of a Wimpy Kid.
— Amy Dillon (@Amy Dillon)1485306439.0

It's great that your kid is reading! But do they have to do it out loud?

Ah, yes. Every once in a while, you get a reminder of why kids are the best, and this is one of 'em. Share this with someone who has kids. They'll get it.