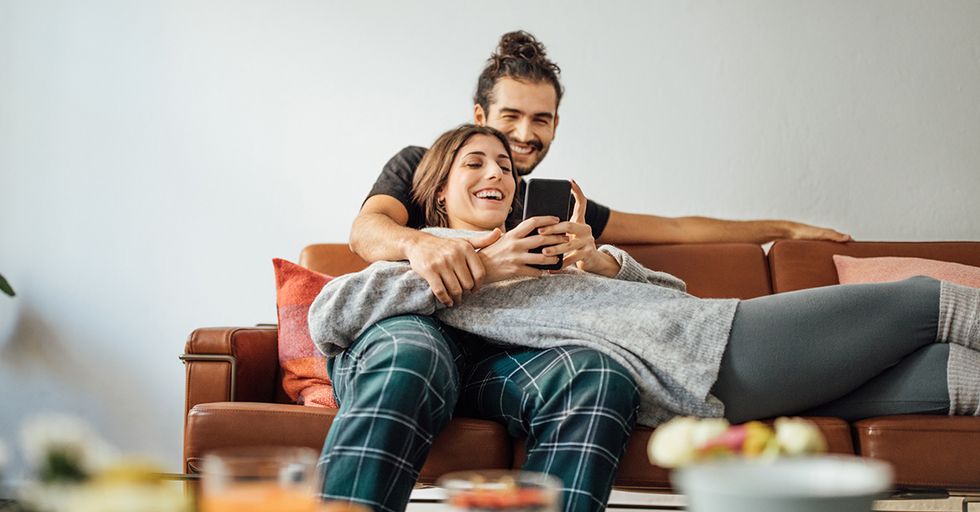 Starting a new relationship is one of the most exciting things ever. Everything is new, you're always giddy with anticipation over the next time you'll see your new boo, and you really end up setting the stage for how your relationship will be for as long as you're together — which is hopefully forever!

After a little while, that giddiness and excitement may remain, but you also develop a deeper bond and aren't afraid to let your guard down and just be yourself around your SO. For a lot of couples, that's around the time they start pondering one of the big questions: Should we move in together?

If you do decide to take the plunge, you're in for a whole new world of excitement. Most of the time, it's like having a sleepover with your best friend every single night of the year!

You'll also discover things that you might not have known about your SO before.

Like the fact that they apparently need 1 million bobby pins in their life for some reason, or that they snore super loudly. It's all part of the process of living together. The following tweets show some of the funnier things that happen when you move in together. Let's get to them!

It's always nice to have an extra pair of eyes.

i married for love but the obvious side benefit of having someone around to find my glasses cannot be ignored
— Cameron Esposito (@Cameron Esposito)1517985286.0

Another bonus? They'll let you know if your glasses are actually just on the top of your head. After laughing at you first, of course.

How do you mess this up?

After nearly 6 years of living together, my husband has yet to figure out where the measuring get stored. And, to be fair, I still don't know exactly which HDMI port on our TV goes to which device. We somehow make it work.

Can't argue with that logic.

Romance is great and all, but let's face it. You can't afford to be single.

Living together means cuddling every night!

Just kidding. It means cuddling every night for about five minutes until they mutter that you're a "little furnace" and jokes about how their arm is falling asleep. It's always nice to have an extra pair of eyes.

Hey, if she wants a present! Get her a present! (And then remind her that it's National Boyfriend Day tomorrow. Even if it isn't.)

Listen, guys. We're not that complicated. Most girls just want to hear those three magic words: "I have food."

Literally never care about having a boyfriend until I'm in bed and realize I've forgotten to turn off the light.
— shelby fero (@shelby fero)1433207549.0

Here's a pro-tip I recently discovered: Get smart light bulbs! You can turn them off right from your bed. Everybody wins!

If this isn't romance, I don't know what is.

Living together might mean you no longer get the cutesy "good morning" text messages, but it does mean that you can get right to the important stuff. Like cheese.

Doing the grocery shopping together also reveals a lot about you.

[supermarket] *BF hands me iceberg lettuce* M: Haha yeah ok *sarcastically​ starts adding it to cart before punting it into the next aisle*
— Hillary (not sara) (@Hillary (not sara))1497237644.0

Hey, it's nice to have goals. It's also nice to have a realistic understanding that some of this might never get accomplished.

Decorating a home together is a great way to learn about each other's likes and dislikes. It's also a great way to get an AWESOME toilet seat like this one.

Never be afraid to laugh at yourselves.

After you move in together, the number of inside jokes you share rises exponentially because you can joke about literally anything that happens, night or day.

You know you've been in a relationship for a while when you don't flinch about sharing a closet but will never consider sharing your fries for even one second.

Granted, this could also happen before you live together. Either way, it can keep the romance alive or could make you question everything. One of the two.

Relationships are an expensive way to watch someone slowly like you less and less.
— shelby fero (@shelby fero)1400556385.0

OK, harsh! In a good relationship, you'll love your partner more the longer you've been together...while also being annoyed with them sometimes.

Netflix and leave me alone.

There's no time for funny business! Jim's about to propose to Pam! (Everyone's still constantly rewatching The Office, right?)

You know people really lump you in a couple when people call you looking for your bf/gf #relationshiplife
— Ashlyn (@Ashlyn)1435850663.0

To be fair, you probably do know exactly where your partner is up to, so they're not wrong to call you!

Remember when you used to agonize over every single text you sent your SO? Yeah. Those days are over.

There's always someone else to blame.

I totally get this. My husband keeps throwing my dirty clothes on the floor instead of putting them in the hamper. The nerve!

My relationship is based solely on whispering, "Are you awake? I need to show you this cat video."
— Megan Fitzgerald (@Megan Fitzgerald)1456930181.0

If you can't immediately show someone an adorable cat video, did you even really watch it? I don't think so.

I miss that stage in relationships where they share all their food with you. Now, me and Aaron go savage over the last slice of pizza
— Rose (@Rose)1354830371.0

You love your partner more than you love life itself. But there is NO WAY they're getting that last slice of pizza. Not in a million years.

It's much harder to walk away angry when you also have to, like, use the same silverware to eat your breakfast. Which is probably a good thing!

In addition to "I have food," there's another set of magical words many women love to hear. "Let's go to Target."

A smart partner always knows when to compromise...and when to convince themselves that they're compromising in order to keep the peace.

It's kind of a miracle.

a long term relationship means hearing "let me empty my butt before you shower" while still finding that other person sexually attractive
— Matt O'Brien (@Matt O'Brien)1387133513.0

Scientists still haven't been able to explain this phenomenon. By all accounts, it shouldn't be this way. But it is!

They are exactly the same.

Relationships are a lot like sports, at first you're really excited but by the end you've eaten too many hot dogs and are too drunk to argue
— paperwash© (@paperwash©)1422117485.0

Also, no one knows what "off-sides" means. (Just kidding. I'm sure someone out there does. I just have not met them.)

You really learn a lot after move in together.

Relationships are like health insurance: all your preexisting conditions start coming out AFTER you've been approved
— Aparna Nancherla (@Aparna Nancherla)1414117822.0

Moving in together is exactly when you realize just how loudly your partner chews gum.

But you've always got someone you can call in an emergency.

Even if it's an emergency, you as a partner are 100 percent responsible. You call, and they'll come running. And only make fun of you a little bit.

So many pillows. And candles! And blankets!

Sometimes, the best way to communicate is via social media.

[commenting under wife’s facebook status where she thanks everyone for coming to our son’s bday party] do we have any mustard?
— brent (@brent)1508855100.0