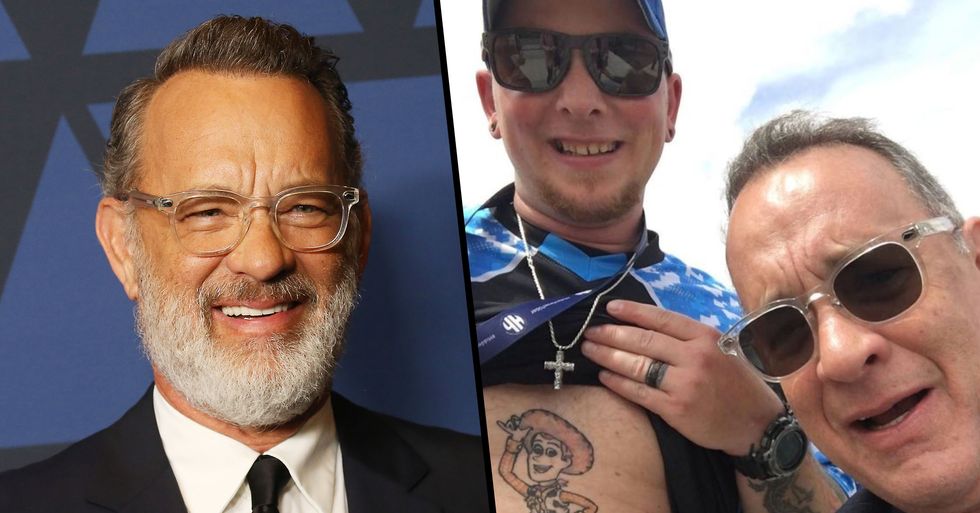 Tweets From People That Met Tom Hanks and Were Not Disappointed

But it turns out he's also just a really nice guy. After he was honored at the Golden Globes, people started sharing stories about meeting Hanks in real life and we can't get enough.

Hanks has starred in and produced so many timeless productions, and, has even been honored with the Lifetime Achievement Award at this year's Golden Globes.

Forrest Gump, which was released in 1994, followed the story of an Alabama man with a low IQ living through some of America’s most iconic and life-changing events, such as presidencies of J.F Kennedy and Johnson, the Vietnam war, and Watergate.

But he's also known as being one of the nicest guys in Hollywood.

So, we've created a list of some of the best stories about people meeting Hanks in real life. They often say you shouldn't meet your idol as you may be hugely disappointed, but for those who have had the pleasure of meeting Tom Hanks, this couldn't be further from the truth. Keep scrolling for a wholesome reading experience.

Seems Tom was pretty impressed with the inking.

Of course, his response was just as great as you'd imagine...

Look how happy he is!

Imagine how you'd feel when the realization hit...

This is one of the best things we've seen. Like ever.

The actor is known for responding to fan mail using a typewriter but this tops them all off. How cute?

Well, this is something to tell the grandkids.

Of course he would be the one to stop. Would we expect anything less?

Can you get any more wholesome?

He seems like he makes so much time for his fans.

Our heart can't handle this.

We would be in a complete state of shock.

Because who doesn't need some fancy coffee in their life?

This woman was clearly gushing over the actor and we can certainly see why.

He's never let his fame get to his head.

13. Making time for others.

This is so sweet.

Free popcorn? From Tom Hanks? Count us in.

We wished you'd asked for a picture too...

There's nothing better than someone who is always there supporting their loved ones, regardless of how hectic your schedule is.

9. "One of the nicest customers I had the pleasure to serve."

After all, manners cost nothing!

He clearly lives up to expectations.

Celebs can fangirl too you know!

Kind and generous? We stan.

5. "One of the most genuine people I have ever met."

4. Spending time with his fans.

It's so refreshing to see a celeb be interested in a fans' life in such a big way!

We wish we could have been a fly on the wall for this.

He's done so much charity work yet never brags about it.

Can you get any more heartwarming? No. No, you can't.