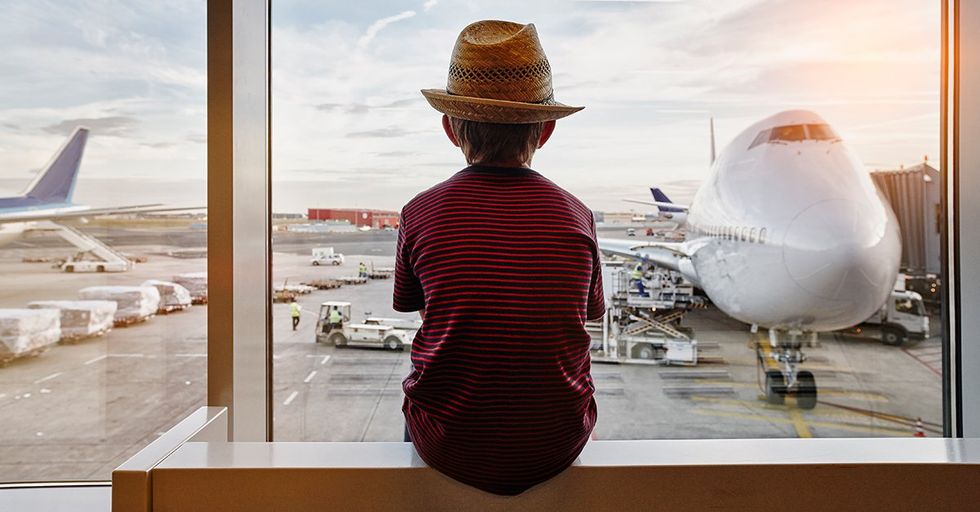 Tweets That Describe the True Horror of Traveling With Small Children

I don't know, man. If I have kids, I can't imagine traveling with them until they can sit still for a minimum of five hours and entertain themselves, not to mention take bathroom breaks by themselves. I don't know how parents do it. Traveling with small children should be an Olympic sport because the parents who do it all deserve medals. They are professional-level athletes of the highest caliber.

If you have ever been on a plane with a screaming baby, trust that no one is more embarrassed, more exhausted, and sorrier than that baby's parents. It just sucks all around. And then, you get to your vacation destination, and your kids are whining and they don't want to do anything and they're tired and they're cranky and you spend a week dragging them around while they're crying and hating everything. And then you hate your vacation, it's miserable, and you just want to go home and sleep. Ever been there? Then these tweets are for you.

This pretty much sums up what it's like to travel with kids.

They are lucky they're cute because otherwise they would be straight-up evil monsters.

Someone should make a montage of parents just screaming at their kids in all different countries, in front of the pyramids, in front of Big Ben, at the top of the Grand Canyon... That would be hilarious and terrible all at the same time.

The only person potentially saying this genuinely is a retired person with grown children. That's the only person.

Comedian Jim Gaffigan probably knows this well. He has a whole legion of small children.

Only a true masochist would travel with kids. I don't know how people do it. I don't think I would be able to.

Small kids on trips basically act like true divas, and if you don't do what they want, they will cry until you do.

Travel tip: before boarding a plane with kids, show them the first episode of Lost and tell them it was caused by a toddler whining.
— The Dad (@The Dad)1391225451.0

This is cruel, but it's probably effective, so I don't know if it's right or wrong. Sometimes you gotta do what you gotta do.

It's not a family vacation until someone threatens to throw a prized possession from a moving vehicle.
— Amy Dillon (@Amy Dillon)1471016301.0

Oh man, this is so true. Usually, it's someone's phone, and only a blood-curdling scream will stop it from happening.

Hester Prynne has nothing on this mom who boarded a plane with four children. The stares were icy. The judgment was real.

Good thing we spent thousands of dollars traveling to another country so my kids could play their iPads in a hotel room instead of at home.
— Unfiltered Mama (@Unfiltered Mama)1491432423.0

This is the human equivalent to a cat being more into the packaging of the toy you bought it than the toy itself. It's infuriating.

See? There is a silver lining to having kids misbehave on planes. You're doing a good deed for others.

I don't understand why this is noteworthy. She packed all the essentials. Except she missed the box of broken crayons. You know, in case you get hungry.

When I have kids, we are going to spend car rides listening to mommy's music and doing nothing else. And they will like it.

Um, yep! This about sums it up. If you can come up with a positive thing about traveling with kids, please call me.

I get this. If I'm being completely honest though, this is also what it's like to be on vacation with me.

I'm like, too good at packing snacks for myself when I go on a flight. I can't imagine how much food I'd bring if I had kids to feed.

Amazing picture. This kid is in Paris, on what looks like a gorgeous day, screaming and crying on the grass. Being a toddler is that hard.

The click of a mother's seatbelt on a road trip is obviously a signal to your children to drop crap they can't reach. #RoadTripWithKids
— Danielle Herzog (@Danielle Herzog)1473950631.0

It's so true! They should invent some sort of net that always catches the things your kids drop within a reachable distance of your kid.

Oh heck no. If I'm traveling with kids, I will 100 percent have another adult there with me to share the anguish and blame.

I'm not going to lie. Even as an adult, I love a good gift shop. I just don't throw a temper tantrum when I don't buy anything from it. Usually.

Every thing you've ever seen a parent do in public that you've disagreed with I've done in this airport today.
— Sweatpants Cher (@Sweatpants Cher)1430246308.0

You have no right to judge what a parent does with a kid in an airport until you are in that position yourself.

Stop complaining about the mom traveling alone with a bunch of screaming kids under 5. I'm buying that damn woman a drink.
— Elizabeth Hackett (@Elizabeth Hackett)1406652727.0

Seriously. Chances are that mom did not choose to travel with a bunch of screaming kids. She has to, and she probably hates it more than you do.

Booking plane tickets for a family trip is a fun little test to see if I still remember all my kids' birthdays and genders.
— Ken Jennings (@Ken Jennings)1424376097.0

This is hilarious! I never thought about how parents could easily lose track of these things if they have multiple children.

Woman traded aisle seat for a middle seat so I could sit near my kids. Which shows people will do anything to get away from kids on a plane
— Kelcey Kintner (@Kelcey Kintner)1485177127.0

I mean, great for that woman, but in no world am I giving up my aisle seat to sit in the middle. I will sit in an aisle next to a screaming child all day before I sit in a middle seat.

When you vacation with kids, you don't really vacation. You parent harder than you've ever parented before.

Kids never appreciate the things they're supposed to appreciate about vacations. Just take them to McDonald's. It's the same thing.

A book to read

I would play a game called "Who can read for the longest time?" and see how long that lasts. That's gotta buy you at least five minutes, right?

It doesn't matter how much we spend on a hotel room, traveling with my kids guarantees it will smell like poop for our entire stay.
— Unfiltered Mama (@Unfiltered Mama)1491524192.0

Kids being taken on vacation often have no idea how lucky they have it. They scream and cry, and that's just on the way to the airport.

I like to get to the airport early so my kids can drive me crazy enough that I don't care whether the plane crashes.
— Sarah Thyre (@Sarah Thyre)1313776840.0

Hilarious. Harsh, but hilarious. Share this with someone who knows the pain of traveling with kids!