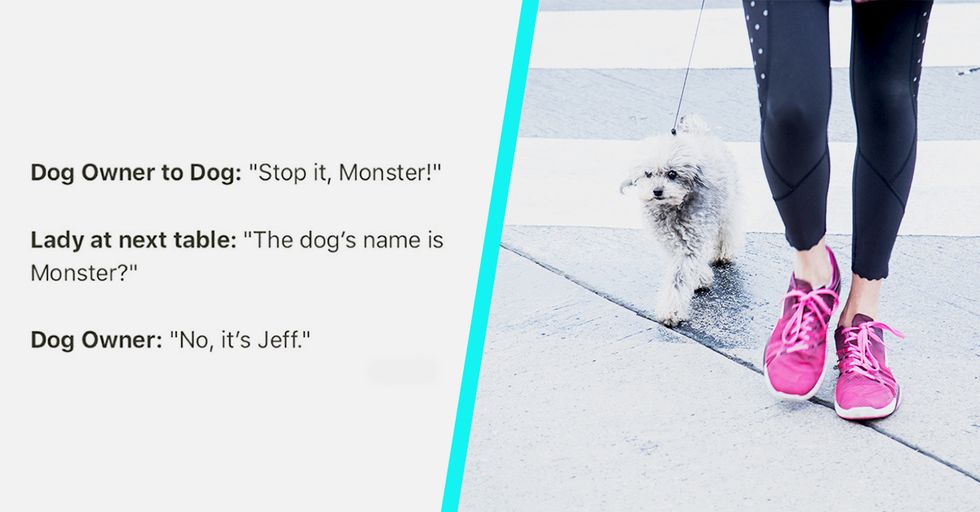 Los Angeles: the City of Angels and home of Hollywood, the entertainment industry, the avocado craze, and an endless source of entertaining characters. The city carries with it a long-running stereotype of being a shallow, insipid place—a stereotype some of LA's inhabitants reinforce in the funniest ways possible.

Check out these 30 conversations overheard across the city; they'll confirm the Los Angeles cliche and make you burst out laughing in the process.

First off, overheard in a West Hollywood Starbucks:

TWENTY-FOUR ESPRESSO SHOTS. There are pick-me-ups and then there's whatever Tim needs this coffee for. That Venti Mocha has enough caffeine to wake the dead.
The California health food craze is very real. So is this burn. ?

Scheduling in LA can be a nightmare.

Top notch time-management skills, right here.
This is an oddly practical view of whether or not someone is ready for a baby. At least this person knows their own limits!
Which dog name is worse: Monster, or Jeff? (TBH naming your dog “Jeff" is absolutely hilarious.)

Overheard at UCLA: a painfully accurate assessment of our current government.
LITERALLY.
How dare she not recognize this iconic Parks and Rec holiday tradition!
Y’all ever heard of the 405? The infamous LA highway has a reputation for insane traffic, and this is how bad it can get:
Welcome to Los Angeles, California, where vibes are a key factor in every decision.

LA is also home to some wonderfully obscure and relatively new types of jobs.
Not everyone moves to LA with a grandiose dream, apparently.
This one was overheard in Hollywood. It’s time for some hard truths.

The truest expression of romantic love in this city.

There’s this tidbit of A+ Parenting:

Wow, this dad thought of everything. What a sensible dude.
Honestly, the MOST accurate of the crazy LA-resident posts.
So many of us move to LA to realize our big-time dreams…and just become wandering babies.
Part One of 'useful things to know before moving to Los Angeles.' Also 100% true.
Called it! Truest expressions of romantic love, pt. 2.
Don't you all just HATE when this happens?

The laws of common decency evaporate on the no-man’s land of the 405 highway. Prepare your war paint.
Yep, the wine section of Culver City’s Target definitely has its own sommelier. Only in LA would you hear this nonsense.
Whatever that long line is, this is Los Angeles, so it must be something trendy and exclusive. Right?
Pasadena: the Elderly Folks' Home of Southern California.
This person is actually making some sense. Taking life advice from cookies doesn't really seem like the most reliable way to live your life.

In other places, awards shows represent a night of entertainment. In LA, they're a glorified speed bump.

The totally relatable problem of having your commute messed up by the Gold Globes.
True; you can never be too careful around those Hollywood Boulevard street performers dressed up as SpongeBob and Chewbacca and such.

This one gets our vote for "the most Californian thing ever."

…so…like…you just want an avocado on a plate?
Social security, not social media. This is just painful.
And finally, we have this piece of LA wisdom. This one does actually seem like you'd find it inside of a fortune cookie. Behold, the wonders of Los Angeles: where crimes of fashion and crimes against humanity are basically the same thing.