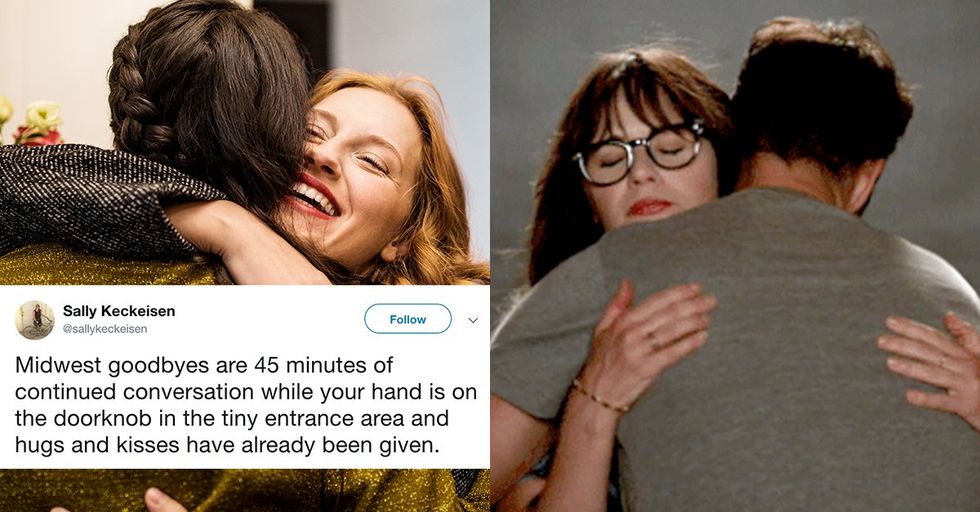 Unless you grew up in the Midwest, you most likely don't understand what it's like there. You might even be one of the many, many people who refer to the Midwest as "flyover states" or those that can't tell the difference between Iowa and Ohio. That's fine. Midwesterners are used to being underestimated. A lot of people don't realize that the Midwest has incredible art, amazing museums, stunning views and vistas, and really good craft beer.

I spent the first 23 years of my life living in Michigan. Although I now live in California, the Midwest will always have my heart (Even though I do not miss the snow one bit). Sometimes I find myself getting a little homesick, so I thought I'd round up some tweets that perfectly capture that Midwest spirit.

Midwest goodbyes are 45 minutes of continued conversation while your hand is on the doorknob in the tiny entrance a… https://t.co/yf2KFz9Ayd
— Sally Keckeisen (@Sally Keckeisen)1514470902.0

When your parents say it's time to go, that means it's time to settle in and start another movie, because you're not going anywhere for a while.

I've seen this "ope" thing mentioned several times over the past year. I'd try to deny it, but I have said "ope" so many times.

Sure, they probably filmed the whole movie in California, but sometimes it's nice to know that someone remembers that the Midwest exists.

midwest culture is needing to pee the entire flight but having a window seat and not wanting to disturb the people… https://t.co/j2AQrkJrNq
— ellie schnitt (@ellie schnitt)1542746016.0

I won't even cause 10 seconds of discomfort to a fellow human. What are you, an east coaster? (I kid, I kid.)

And you're in shorts. At the beach.

midwest culture is putting your paper plate upside down in the trash so you don’t offend whoever made the stuff you didn’t eat
— devin (@devin)1542913475.0

Turns out, not everyone from the midwest likes Ambrosia Salad. But you can't tell anyone I said that.

Midwest culture is having a legitimate 20-minute long debate over the correct pronunciation of the word “pecan.” Bt… https://t.co/RBMzBV1pqb
— Michael Arnold (@Michael Arnold)1543387806.0

"Pih-cahn" all the way! There is no other option.

"What was I thinking?"

One doesn't simply "get over" a social faux pas like this. Now you have to stand outside and hold the door open for an hour as penance.

Don't knock a cheese ball until you've tried it! No potluck or family get together is complete without one! (Also, 7-layer dip.)

The only thing I know about bodegas is that they have cats there. I assume they are some sort of cat garage.

It works so well!

Looking for a beer? It's on the porch. Or it might be in the garage fridge. Everybody has one.

I personally hate milk, but it was always a beverage option at the dinner table. It didn't matter what we were eating. Spaghetti. Roast beef. Tuna casserole. Milk was always there. My dad drinks his with ice cubes!

I can't tell you how many 20-hour road trips I've been on. We didn't even stop overnight! What were we thinking?!

Also saying "zip" every time you see a horse and keeping track of everyone's points. Also calling out "paddidle!" when you see a car with one headlight. Look, we spend a lot of time in cars, OK?

"Watch out for deer!"

If you've ever hit a deer, you know how useful this reminder can be. Those things are solid.

Don't forget waking up early so you can get breakfast at Cracker Barrel. I love those blueberry pancakes!

Excuse me, I think you mean the fancy Meijer. (Or, as everyone in the midwest calls it, "Meijersssss.")

It's stuck in my head now.

Midwest culture is singing along with the “merry Christmas merry merry Christmas” in the holiday Menards commercial on the radio
— Momo’s Bob (@Momo’s Bob)1542667301.0

Sing it with me, folks! "Warm seasons greetings to you all! From! Menards!"

The Midwest: Where a few hours spent at Target is a legit activity and not an errand you have to run.

This is a dangerous game, though. You don't want to be late for you next class! That would also be rude!

And pronounce "Ypsilanti," "Gratiot," and "Waukegan."

If a midwesterner is every more than 10 feet away from a bottle of Ranch dressing, they start developing a rash. It's true.

Non Midwesterners: How many miles is that?

This has burned me so many times living in Los Angeles. I literally spent 1.5 hours traveling 18 miles yesterday and it almost made me cry.

Don't forget slapping your knees with your hands and standing up. But don't worry – there's still the 45-minute-long goodbye ritual to go through. It's a wonder midwesterners are ever able to leave any place.

I see all these tweets about midwesterners saying “ope” all the time. What really needs to be talked about though i… https://t.co/dCO0wfe6FM
— Gabe Harrelson (@Gabe Harrelson)1543022633.0

A real conversation between two midwesterners: "'Ope, scuse me, I'm gonna just *sneak* past ya." "Oh, sorry!" "You're fine!"

There are so many potholes.

a midwesterners tale: Are they flashing me their brights or am I just repeatedly hitting potholes?
— ShyAnna (@ShyAnna)1542670496.0

The one nice thing about midwestern winters is that the snow usually fills the potholes. That's something. Share this with your midwestern friends!