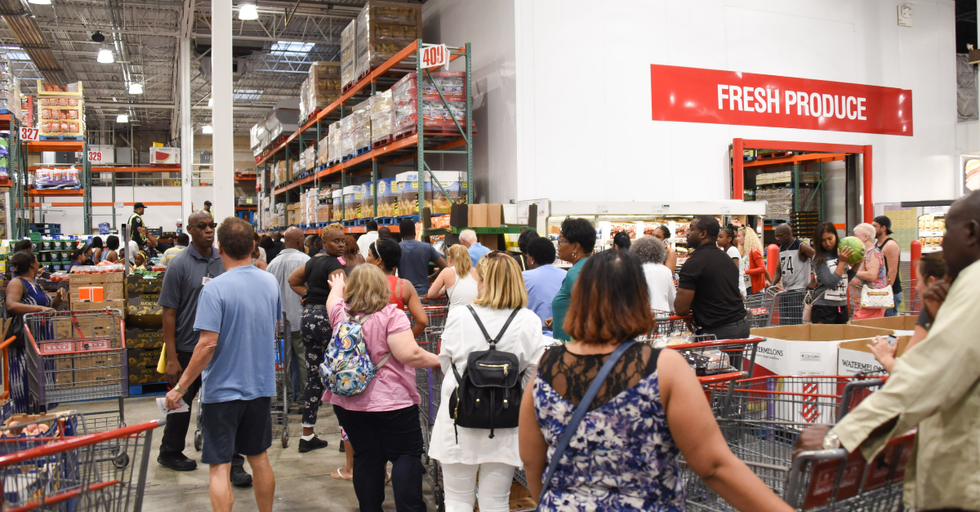 These Hilarious Tweets Perfectly Capture Why Costco Is So Amazing

Ahhh, Costco. It's a modern marvel. A lot of people will try to tell you that a certain mouse-run theme park is the happiest place on Earth– but I'm here to inform you that that is not true. Anyone who doesn't realize Costco is the happiest place on Earth clearly has not visited the super wide aisles of glory or tasted the sweet nectar that is Costco Free Samples (not to mention the Costco pizza).

If you shop there, you get it. And if you don't shop there, what are you waiting for? You can go to Costco for everything you might ever need in your life — and a lot of it, at that. They even sell coffins!

We've gathered a bunch of tweets that perfectly capture exactly what it means to be a Costco shopper. These people get it. In bulk.

I think the reason Costco food is so cheap is because it takes a year off your life from the stress trying to find a parking spot
— JMSN🧷 (@JMSN🧷)1505862325.0

I think the same must be true for Trader Joe's. Have you ever been to a Trader Joe's with a non-awful parking lot? I'm not sure they exist.

Made the mistake of going to Costco after drinking a half bottle of wine & now I'm the proud owner of everything. Except tires.
— Sarcastic Mommy (@Sarcastic Mommy)1476491638.0

Everyone knows it's important to drink responsibly. No one is warning people to Costco-shop responsibly, though.

On the plus side, you are definitely not going to get scurvy anytime soon. That's nice, right?

This is the real trick Costco pulls. And yet, I fall for it every time.

There's so much to process.

Everywhere you look, there's a deal. Or a free sample. Or someone with multiple carts packed to the brim.

Went to Costco for paper towels and bought the Cleveland Browns and a helicopter.
— Chez McCorvey (@Chez McCorvey)1397006058.0

I hear the Costco brand helicopters are really great. I thought they were only available in three-packs, though?

This is a challenge.

You don't really love something until you can eat 5 gallons of it. That's what Costco seems to think, anyway.

It's not a new food.

I love that people are sampling animal crackers at Costco like they don't know what they taste like. NOTHIN'S CHANGED, GUYS.
— Megan Batoon (@Megan Batoon)1489342888.0

See, people know exactly what to expect. But it's free! You can't turn down free food! That's a rule.

Hell hath no fury like a Costco sample seeker scorned. I hope they brought another tray out.

That wasn't me, I swear.

Headed to Costco? Don't forget your box of wigs and stick-on facial hair!

It's also a full-body workout! There are so many benefits to a Costco membership.

A fun game to play in Costco is: Is that person a doomsday prepper, or just a parent to many children? I always guess wrong.

It just wouldn't work out.

Sometimes I wish I could have lived in medieval Europe, but then I imagine galloping home from Costco with 20 bottles of BBQ sauce and nope.
— Stabbatha Christy (@Stabbatha Christy)1541272108.0

There are plenty of reasons why living in medieval Europe was less than stellar. This is the main one, though.

Oh, come on. We all know you love it.

I sincerely apologize for every time I've talked shit about Costco. Now that I have two kids I realize that this place is fucking magical.
— Linz DeFranco (@LinzDeFranco) December 11, 2018

You don't know until you know. Welcome to our side. You'll need another freezer.

Welcome to adulthood! Now you can reminisce about all the cool things you used to do while chowing down on Costco free samples.

Worried about needing a giant bottle of wine to fill those glasses? Don't worry. Costco has you covered.

Congrats on the new pillow!

I know I'm getting old because I'm super excited about a new pillow I got from Costco.
— The Robfather™ (@thatUPSdude) December 9, 2018

Another year of sweet deals and free samples! Let's go to Costco to celebrate!

Some might say stocking up on toilet paper is crazy, but you're going to use it eventually.

On the bright side, you probably don't have to go shopping again for another 12 years. That's something!

If Frozen 2 doesn't already take place in the Costco produce room, then the creators of that film made a horrible mistake.

I would have said yes.

First of all, how dare he break the cardinal rule of grocery shopping and look in your cart! Secondly, it sounds like you're doing everything right. Keep it up.

You're definitely going to qualify.

This is another great benefit to stocking up on toilet paper. Now everyone can have some!

I think they should include trying to get to the check out at Costco as an Olympic sport.
— ThisOneSays (@ThisOneSays)1470452372.0

I'm now imagining an entire Olympic games set inside a Costco. And I like it.

I know you're not supposed to hug the old lady giving out samples at Costco, but the sausage she gave me had cheese inside. Cheese.In.Side.
— Abe Yospe (@Abe Yospe)1454794987.0

Yeah, you did the right thing here. She was probably an angel.

Hey! Costco is a perfectly acceptable date location! So is Target.

The math checks out.

Those Oreos aren't going to eat themselves! You've got work to do!

I hope you find comfort in this trying time. Share this with someone who loves shopping at Costcoo!