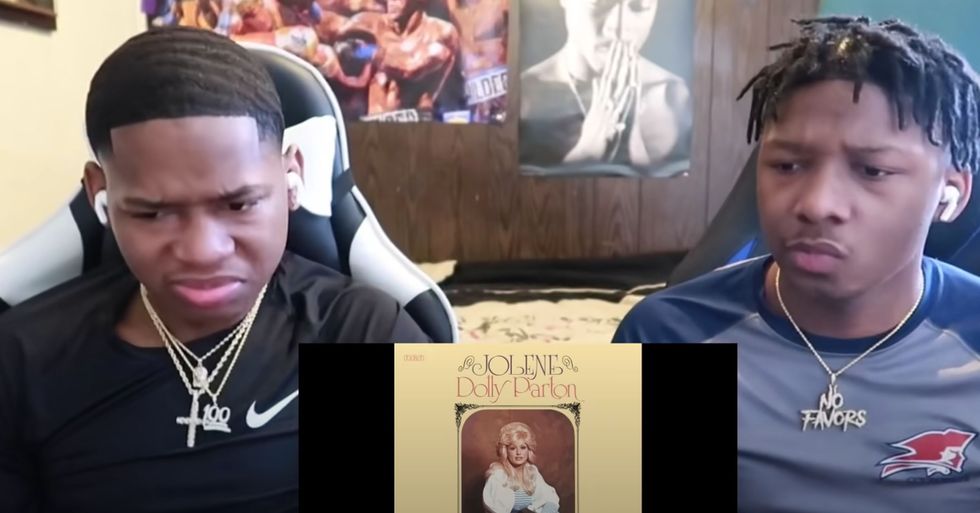 A video has gone viral after twins film their hilarious reaction to hearing a Dolly Parton classic for the first time...

The video series sees the twins reacting to classic tracks for the first time.

Tim originally came up with the idea for the series to broaden the duo's music horizons.

Speaking to People Magazine, Fred said: “There’s more than just rap out there. There’s so much more than I ever thought."

His twin says the pair are open to all genres.

"We wanted to start a new trend to appreciate old music. We’re open to all genres. We also want to bring people together because there’s no color to music," Tim explained.

And it's brought them a ton of success on the platform.

In fact, they recently received their 100,000 subscriber plaque, although now their subscriber count is close to 400,000.

As part of the YouTube series, the duo have reacted to some of the biggest hits from '70s and '80s.

Including “In the Air Tonight" by Phil Collins, “Dancing in the Dark" by Bruce Springsteen, and Janis Joplin‘s “Piece of My Heart."

The series has gone down a treat with viewers.

But the latest episode has been hailed as the best yet.

The pair decided to film their reaction to Jolene by Dolly Parton.

And it's safe to say, their reaction was priceless...

"Jolene" was written and performed by the country music legend.

It's definitely a classic.

And it has remained timeless, with people still loving more than 5 decades on!

It's pretty baffling how Tim and Fred haven't heard the track before now.

But either way, their reaction to it was pure gold.

As soon as the song starts they were instantly hooked...

But they seem to be most impressed by the story the song tells.

They looked to be well and truly sold on the track.

And, after the clip went viral, reactions to their video came pouring in.

@lauraolin This is sooo great. I love these young men listening to legends and paying such respect to greatness
— Steve Wyche (@Steve Wyche)1596816555.0

Watch their hilarious reaction below:

We can't wait to see what they react to next! Want more music news? Keep scrolling to see why Alex Trebek destroys a contestant over their taste in music...