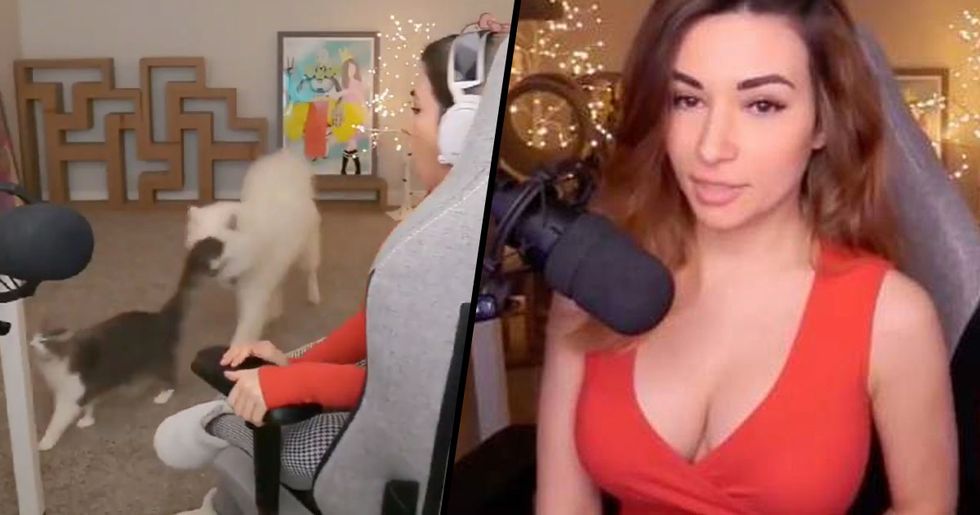 Another day, another Twitch incident.

For those of you who aren't aware, Twitch is a platform on which the online gaming community can connect with each other as well as stream videos (amongst many other things!).

One Twitch user named "Alinity" has made global news for posting a video that includes a clip of her abusing her cat on camera. The footage is extremely disturbing and has set the internet off - and for good reason! Due to the backlash that she received, Alinity is now being investigated by the People for the Ethical Treatment of Animals (PETA).

Keep reading to watch the video and to see how she responded to the criticism.

Twitch has been known for stirring up a bit of controversy.

From weird users to weird videos, the platform seems to be filled with content that you could only stumble across accidentally.

And a lot of it goes viral!

There are usually requirements for a video to go viral: it's either extremely heartwarming or it's extremely funny. But every now and again, something falls outside of those requirements and goes viral anyway.

Here's an example of one of those videos.

This streamer, named "dinglederper," went viral for one of the most ridiculous reasons ever... She gained over seven million views on this video because... wait for it... her German shepherd bumped into her and spilled her wine. That's it.

You can throw those requirements out of the window!

This video proves that the only thing that you need in order to go viral in the gaming world is to be attractive.

I mean, I guess it was a lethal combination.

An attractive girl and a German shepherd? You could go viral even without the help of a massive fanbase with that combo.

Reading these stories about Twitch has helped me to come to a decision.

You will never catch me making an account on Twitch, I can assure you of that.

And this particular story just made me certain that decision was a good one.

Recently, a Twitch streamer went viral for all the wrong reasons. Canadian gamer, Natalia Mogollon, better known as "Alinity" on Twitch, is currently facing serious backlash from the online community after she was caught throwing her cat, Milo, over her head.

It was so disturbing that PETA had no choice but to get involved.

They retweeted the video to over a million followers, which helped this whole thing gain to the attention that it deserves.

This is what they had to say:

"Take a stand for cats & please remove Alinity from @Twitch immediately. She is using the platform to post animal abuse, which sends a dangerous message to anyone watching her videos. Cats are not props to abuse for more views." Keep scrolling to see the video!

The tweet has received immense support from other users who all agree that what Alinity did was wrong.

A lot of people agreed with this one too...

How can you be a good person if you're openly abusing animals and streaming it on the internet?

Other popular streamers also had their say on the issue.

Imane Anys, also known as "Pokimane," said: “If I picked Mimi up and I tossed her to the side here she would land on my bed because my bed’s right there, but also I wouldn’t overhand ‘yeet’ her, that’s a bit much."

Some people dug further into Alinity and discovered some more horrendous content.

In one particular video, she feeds her car vodka. She takes a swig from a large glass bottle and then proceeds to bring her mouth close to that of her cat so that it can drink. Immediately, you can see how her pet reacts to the liquid as it enters its body.

And the worst part is, she had the audacity to lie about it!

She's really not helping herself, is she?

There have been a series of other problematic things that Alinity has been caught doing.

Here's another incident that emerged of the Twitch streamer kicking her dog. While some argued that the kick was not strong enough to injure the pup, others shut that down saying that abuse is abuse. We agree!

It's not looking great, is it?

Even when her fans tried to defend the star, they were immediately shut down.

Asking a person that streams a massive portion of their lives online for evidence is just stupid. It only takes a Google search - you'll probably get even more than you bargained for.

And that's exactly what happened.

Have a look at the cat incident for yourselves!

Due to the intense backlash, Alinity addressed the issue via Twitter.

Hey everyone, I understand the concern and I am sorry for my lapses in judgement. I shouldnt have gotten frustrated… https://t.co/IkhNCT3ubX
— Alinity (@Alinity)1563565621.0

After initially denying the fact that she fed her cat vodka, it seems as if she finally ended up admitting to it in this tweet.

The apology seems half-hearted to me, but it looks like it's the best we're getting.

I also understand the desire to report me to pet authorities and encourage anyone to do so if they feel pets are be… https://t.co/UYahfWf9Aj
— Alinity (@Alinity)1563565621.0

The investigation is well underway. Let's just hope that none of her pets are subjected to any more abuse. And it seems like many others also mess up pretty badly on the internet. Keep reading to see what happened to an Instagram user who posted some highly insensitive content.