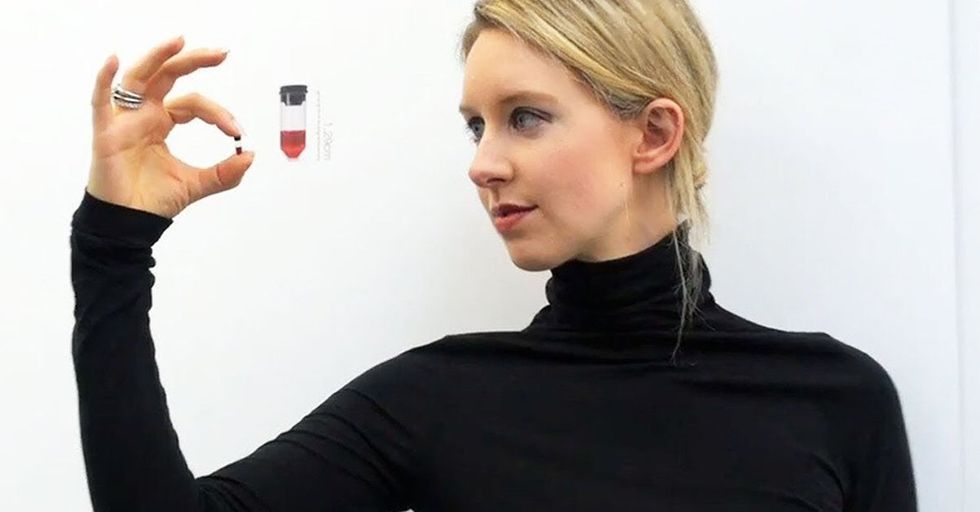 In case you missed it, The Inventor just came out on HBO. It's a documentary about Elizabeth Holmes and her company Theranos, which was a huge deal in the tech and medical industries until it all fell apart and Holmes was outed as a total liar and manipulator and grifter. It's incredible. It's bizarre. You have to watch it.

Holmes is a character. She is tall and pale and blonde and has a crazy-deep voice and unblinking eyes. She charmed investors at the young age of 19 with her revolutionary idea that would change the medical industry forever. She was going to invent a way to perform hundreds of medical tests using only a few drops of blood. Trips to the lab and multiple vials collected through needles in your arm would be a thing of the past. Patients would be able to order their own bloodwork, prick their finger, collect a few drops of blood, and take control of their own medical records. The problem is that it wasn't possible. The product Holmes promised was never delivered.

The Inventor delves into just what went wrong at Theranos and attempts to explain how someone like Holmes could deceive that many people for so long. It's fascinating. It's bizarre. And Holmes is such a weird and interesting character. Here are some of my favorite tweets about the craziness that is The Inventor.

This is so true. Elizabeth Holmes does not seem like a real person. She comes across like a character someone like Kate McKinnon would have invented for SNL.

There were many, many scenes that featured Elizabeth Holmes in the documentary, and I honestly don't remember her blinking once. Freaky.

Please do not let Elizabeth Holmes give women with deep voices who wear black turtlenecks and look dead behind the… https://t.co/OXdZ3b42pq
— Julia Claire (@Julia Claire)1553094109.0

Holmes is known for her strangely deep voice, affinity for black turtlenecks, and deep, dead eyes. But this describes a whole bunch of women!

as a blonde woman with bad hair and lots of turtlenecks you MAY have noticed i've remained silent about "elizabeth holmes"
— steph mccann (@steph mccann)1553281079.0

People were really focused on her looks because she seemed to be so intentional about every one of the choices she made. And somehow, they worked...on old white investor men, at least.

A fun thing to do

one thing i have been doing is telling all the white blonde women i know that they look like elizabeth holmes it r… https://t.co/gjsjGec3rg
— Scaachi (@Scaachi)1553569389.0

This is hilarious. Even though men were hypnotized by Elizabeth Holmes, most women I know seem to agree that she's sort of a hot mess.

This is too funny. She took so many of these Steve Jobs-like photos with these little blood capsules. But she didn't end up with the clout of Jobs. Instead, she's been hit with multiple charges of fraud!

Seriously, at times I couldn't pay attention to the documentary because I was too distracted by how fried Holmes' hair looked.

I’ve only been thinking about Elizabeth Holmes for weeks now, since I read “Bad Blood,” but this won’t leave my bra… https://t.co/zoNUidwHtG
— Alison Bennett (@Alison Bennett)1553051439.0

That's the thing! She was clearly ripping of Steve Jobs at the same time that Steve Jobs was being Steve Jobs. How was no one like, "Hey, maybe get your own thing"?

There’s a part of the HBO Theranos doc where Elizabeth Holmes and her 40-something Pakistani boyfriend dance to MC… https://t.co/vA0LLScQFa
— Linette Lopez (@Linette Lopez)1553037419.0

This is true. It's so cringeworthy. I recommend watching the doc at least so you can see this. It's worth it.

If you've seen Romy and Michele's High School Reunion, you might have a better idea of what Elizabeth Holmes looks and sounds like. Mira Sorvino is spot-on.

Calvin wasn't the only person to think so. Romy and Michele talking about inventing Post-Its is exactly how Holmes talked about her made-up product.

This is key. You and I... We have no idea what it was about Elizabeth Holmes that charmed the pants off of a bunch of old white dudes. But they were smitten. She was clearly trained to know how to play them.

Elizabeth Holmes & Donald Trump both prove that people will believe any con as long as you’re hot as hell and have a sexy-ass voice
— Dan Gurewitch (@Dan Gurewitch)1553100937.0

This is a really funny joke. Just want to clarify that this is a joke. No one, not even his supporters, thinks Donald Trump is "hot" or has a "sexy" voice.

elizabeth holmes seems like every girl i went to school with who made me feel stupid for not owning a horse
— Anne T. Donahue (@Anne T. Donahue)1553188248.0

This is very, very accurate. Holmes was definitely one of those horse girls who thought she was better than everybody but was also only friends with horses.

Yes!! I don't remember why this was in there, but it was in the doc, and it was way too much for me to handle. Why is his mouth moving like that?

This is so true. The doc sort of made it clear that she was kind of a loner growing up, and you sort of feel bad for her, until she deceives millions of people and wastes millions of dollars.

I don't know how Holmes does it. It seems really affected, but she's not making this face, which is definitely the face I automatically make when I try to replicate her voice.

Every time I hear Elizabeth Holmes speak I think she’s going to ask if my refrigerator is running
— Jess Dweck (@Jess Dweck)1553059093.0

So many people focused on her voice, but it's true! It sounds like a joke, like a scam in and of itself. It's crazy that people fell for her schtick.

i was very disappointed that the elizabeth holmes documentary did not address that she is an HEIR to Fleischmann's… https://t.co/TjIDjlXZZc
— Gabby Noone (@Gabby Noone)1553375881.0

Wow, I did not know this, and this is very disturbing to me. Is there even any other brand of yeast? I feel like I only see Fleischmann's in the grocery store.

This clip of Lady Gaga is so perfect. Holmes could never describe how her machine worked because it didn't. What she wanted to do, and what she claimed to be doing, was impossible.

Seriously, man. She was a master grifter in every sense. She fooled so many rich white dudes! If only she hadn't caused so much harm to others.

Yes. This comparison is too good. Watch The Inventor and an episode of Portlandia back-to-back and tell Sara she's wrong. I dare you!

It might be harder for women to legitimately make it in the tech world, but Holmes' white womanness was her weapon, and she knew how to use it.

This one got a cackle out of me. Remember when they were together and they wore vials of each other's blood around their necks? Good times.

She really is! This woman knew from the get-go that Holmes' idea wouldn't work, and she told her as much. She wasn't falling for her crap.

my favorite person in the theranos doc is the female stanford professor who was onto elizabeth holmes from the get… https://t.co/Hug6Gyg5N1
— Brandy Jensen (@Brandy Jensen)1553048440.0

She deserved to be smug! She was the only one who didn't fall for Holmes immediately without any proof that her science checked out.

Gonna be Elizabeth Holmes for Halloween and hand out single Hershey kisses to children after posing with them for 3… https://t.co/6podJBK9Ls
— caitie delaney (@caitie delaney)1553036181.0

This is a great idea. I anticipate a lot of Elizabeth Holmes Halloween costumes this year. It's an easy one to do well.

Why. This is so disturbing. I hate it so much, and yet, I cannot look away. It's terrifying.

Somehow equally as disturbing! Share this with someone who's also fascinated by this story!