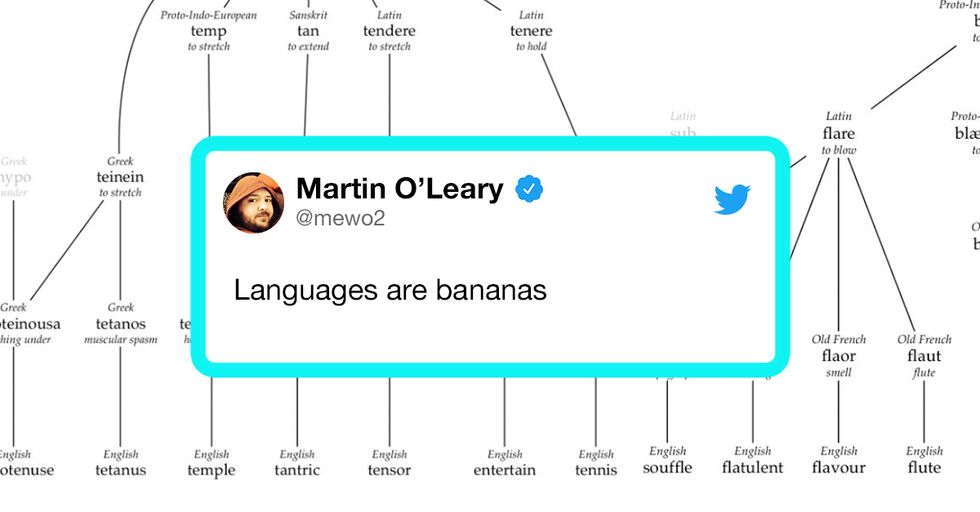 Martin O'Leary, Twitter user and self-proclaimed science-doer, and maker of Weird Internet Stuff, must have had a few hours to spare this week when he decided to retrace the etymology of the English Language (or at least some of it).

Little did he know that his time would prove to be well spent, as his homemade etymology charts are blowing people's minds across the internet.

Way to go, Martin, thanks for the weird stuff.

It turns out, people have a thing for etymology.

Martin O'Leary has gotten quite the response since tweeting out his homemade etymology charts, in which he traces back the history of over twenty English words.

Martin's original tweet was captioned, "Languages are bananas," and it turns out, the internet agrees.

This guy really speaks for Twitter as a whole when he expresses his interest in Martin O'Leary's etymology charts. Others claimed to be utterly "SHOOK" by Martin's charts.

Martin O'Leary had no idea he'd be tapping into the internet's unexpected recent obsession when he tweeted several etymology charts that he constructed using information from etymonline.com and the OED. It's safe to say he was a bit taken aback by the response.

@noop_noob The original English meaning of “flavour” is “smell”, then specifically “the part of taste which depends… https://t.co/Jwng7FI3yq
— Martin O'Leary (@Martin O'Leary)1517517461.0

I had my own personal "Slumdog Millionaire" moment as I scanned through the specific words that Martin chose to etymologize. My first deja vu moment set in when I saw the etymology for the word "taste," which as Martin so astutely shows us, is born from the word "smell." If, like me, you've watched "The Big Stink," episode of The Magic School Bus on Netflix 147 times this week (my son completely dedicates himself to one episode per season), then Miss Frizzle has already explained to you, many, many times, that the majority of what we taste actually comes from what we are smelling as we chew our food. Who knew? Oh yes, I did. How could I forget? After all, "All's well that smells well!"

As I approached another tweet in response to Martin's mindboggling gift to Twitter, once again, I was shocked to find this word's etymology was yet another random fact that, by some odd twist of fate, I had come to know. The word Daschund literally translates to "Badger Dogs." Having had a weenie dog of my own for many years, and a tree with many squirrel tenants in my yard, I learned very early each morning that Daschunds love to hunt, and that squirrels are the closest creatures to badgers in suburban areas.

Here is where my Slumdog moments ends and I join the rest of Twitter in their awe of Martin's mindblowing madness. However, being married with a long history of apartment tenancies, I should have known that "husband" and "neighbor" are both close cousins of "bumpkin," which Dictionary.com translates as "an awkward, simple, unsophisticated person from a rural area; yokel." Sounds about right.

When another enlightened yet curious Twitter user, Not A Dog, asked Martin, "WHAT'S THE ORIGIN OF THE WORD "DOG"? ASKING FOR A FRIEND THANKS," O'Leary was quick to shift roles from etymologist hobbyist to mystery detective...

Religious fanatics everywhere will be thrilled to learn that there is, in fact, a connection between "Science" and "sh*t" (excuse my language). Of course, the correlation, at this point, is purely etymological but that shouldn't stop Darwin doubters from having a field day.

Funny that "entertain" comes from "to hold together."

A good day for the internet.

Sometimes, the internet is a dark and bottomless pit of useless information. And other times, its a well of knowledge just waiting to blow our minds while simultaneously providing us with water cooler conversation. Thanks to Martin O'Leary and his etymology lesson, today was an educational one.