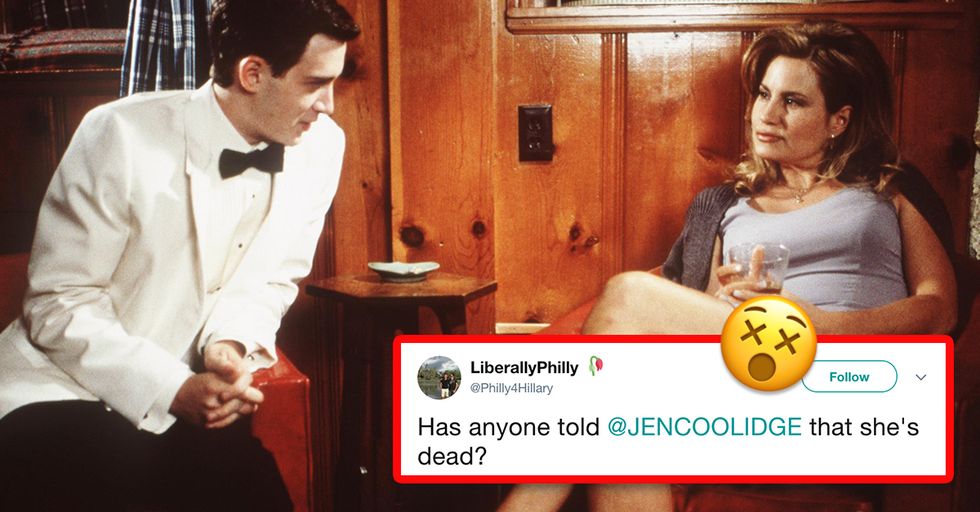 On July 9, 1999, a movie burst onto movie theaters the likes of which the American public had never before seen. It was raunchy, obscene, hilarious – it featured a teenaged boy doing unspeakably sexual things to that most American of desserts, the apple pie. It was called, quite appropriately American Pie, and it was a monster hit among the teenaged set.

Who can forget Eugene Levy as the painfully awkward father? Or Jason Biggs as Jim, the nerdy everyman protagonist desperate to lose his virginity?  Or Shannon Elizabeth as Nadia, the very hot Slovakian exchange student. What about Sean William Scott as Steven Stifler, the profane, but strangely likable jock?

But there was one character that would quickly grow to overshadow her relatively small part in American Pie.

She was blonde, buxom, and sexually voracious. She preyed on eager teenage boys and they loved her for it.

It was a word made famous by Jennifer Coolidge, the actress who played Stifler's mother in the movie.

Coolidge has had several roles before and after.

She played Paulette in the movie Legally Blonde, and Sophie in the sitcom 2 Broke Girls.  She has a robust Twitter presence and a sly, offbeat sense of humor. Still, none of her roles have had as much resonance as Stifler's Mom.

In the halcyon days of a teenage boy's youth, when he's just crossed over the cusp of legal, there's a Stifler's Mom waiting for him in his deepest dreams – a predatory, slightly skeevy-in-a-classy-way older woman of buxom charms to lead him to the promised land of sexual wish fulfillment.

Stifler's Mom exists in that gauzy space between reality and the sweaty daydreams of hormone-addled teenaged boys.

She is a mirage of what might, but probably never will be, considering most grown women don't prowl around in bikinis searching desperately for teenage boys to perv on.

She is like Stacey's Mom or Mrs. Robinson, but hotter and more buxom with a face and body that hint at untold worlds of pleasure.

Stifler's Mom, is, in short, the epitome of fantasy. Specifically, teenage boy fantasies. She exists for the precise reason that she doesn't really actually exist. She's  a mirage of desire and want. Ether and air, but no actual substance.

Which may be why one media company put her face on a list of "These celebs died without anybody knowing."

While Stifler's Mom (Jennifer Coolidge) may not be visible, that doesn't mean she's dead. That's why one intrepid Twitter user retweeted the post with the caption, "Has anyone told @JENCOOLIDGE that she's dead?"

To this, Coolidge had a short but saucy reply.

"Yes, I am dead, and it's great!" Oh, Stifler's Mom, may you remain forever young and unchanging.