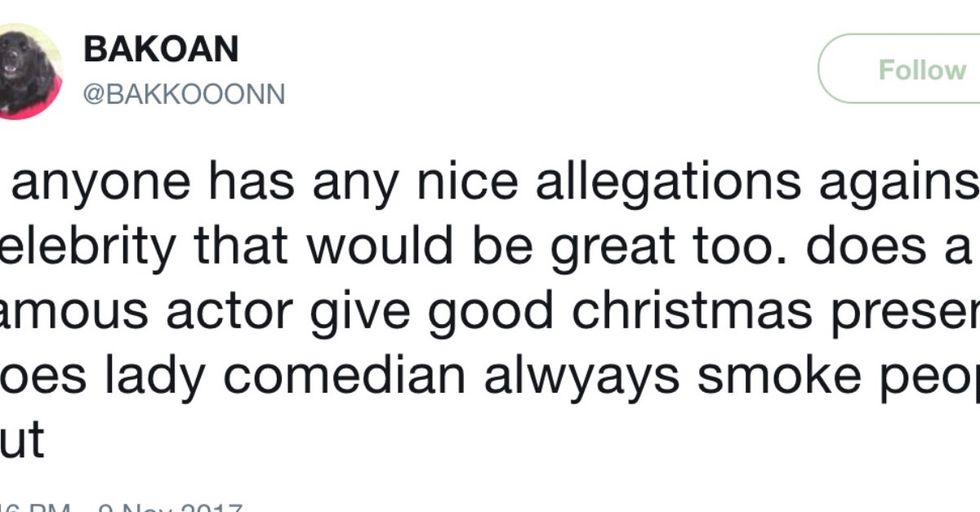 Celebrities are being called out every day for sexual harassment and assault, leaving the rest of us feeling hurt and betrayed by these people we felt like we knew. While some fans can't seem to handle the cognitive dissonance of learning that their beloved celebrities aren't who we thought they were, most most of us sadly take note, "Oh, no! Not him! I loved him!" we say as we move the latest celebrity creep out of the Love column and into the Creep column. Each day, it seems, another hero falls.

In this environment of celebrities falling from grace, Twitter user @BAKKOOONN started a new conversation.

if anyone has any nice allegations against a celebrity that would be great too. does a famous actor give good chris… https://t.co/Cr4fjR3T8I
— BAKOON (@BAKOON)1510263992.0

BAKOAN asked the twitterverse to share stories of celebrities being nice. And the "nice allegations" started rolling in. It turns out, there are a lot of good people among the rich and famous.

People encounter celebrities every day in all sorts of situations.

Way to go Lou! When was the last time you thought of Lou Diamond Phillips? I'm glad to know that the guy I fell in love with after seeing 1987's La Bamba is a nice guy.

The best is when you find out that a whole ensemble cast are really friends and funny people.

I know that this tweet didn't say anything about them being friends, but in my head they totally are. Dax and Kristen's kids will grow up with Ted Danson as a kindly, funny uncle figure. Please, Ted Danson, don't turn out to be a creep. Please say you've never succumbed to the lechery of so many of your peers!!

Here's one that will make your heart grow three sizes.

If there's a celebrity we want to be able to continue to love, it's Robin Williams. We all know how his story ends. Let's hope his legacy, as plagued by demons as he was, continues to shine for his unique genius, comedic brilliance, and huge heartedness.

Pies are a terrific apology food.

Sure, he throws neighborhood disturbing parties. But, PIES! Way to go, Jared. The "nice allegations" kept pouring in...

When celebrities are extra nice to kids it's the BEST.

@BAKKOOONN @GDIGM when I️ was around 5, I️ saw Geena Davis by the pool at a resort while on vacation with my family… https://t.co/GYOoPgqrO9
— DwntwnJane (@DwntwnJane)1510361613.0

A child meeting an actor who understands that she needs to pretend to be the character that the child knows? How awesome is that? Did you know that Davis sponsored the largest research project ever undertaken to study the disparity between male and female characters in children's television and movies, and has gone on to fund and head initiatives to correct the huge imbalance? We like Geena Davis.

We love it when celebrities appreciate their fans.

It shouldn't be hard for celebrities to realize that they wouldn't be where they are if not for the fans. We're the real heroes here. Way to go, Sandler, for giving your fans the respect they deserve.

@BAKKOOONN Patrick Stewart was unnecessarily kind and gracious to teenaged me and my girlfriend on the set of Star… https://t.co/8azZIPubS8
— Noah Brand (@Noah Brand)1510270535.0

The classically trained X-Man is also an advocate for women and victims of domestic abuse. Having grown up with a violent father, he has dedicated his life to being a different type of man. We could use more like him.

Michael Bolton may have started as a great head of hair, but he's proved to be so much more than that.

I've loved Bolton since that Jack Sparrow skit. (It's NSFW.) He's talented, knows how to manage curly hair, and has a great sense of humor. And he's nice? He's got it all.

I want George Costanza to make me snacks.

I love hearing that Jason Alexander is humble enough to prepare snacks while someone helps him with his technology. If we didn't love him already, here's his recent response to the Louis C.K. allegations: "Gentlemen, comedy is often inappropriate. It is sometimes daring and audacious and shocking. But our behavior, in the real world, toward women - that doesn’t get a pass on inappropriate." The good rumors don't end here. Read on to see who spent hours in makeup just to meet a fan in character.

This one doesn't surprise me at all.

Christopher Walken is all class. (If he's not, I will be very sad to learn it.)

This is going the extra mile.

Four hours of make-up to transform into the character that this little boy wanted to meet. Look at them shooting the breeze! Love this.

They've got opinions on public transportation too. I bet that it's refreshing to be treated like anybody else sometimes.

We're used to seeing stars visiting sick kids, but that's because they want people to know about it.

Celebrities often show up with the press, but when they do good deeds and keep it private? That's the best. I love learning that Chris Martin does this and he doesn't even want attention for it! So, yes, it sucks that your favorite celebrities are turning out to be lifelong jerks, perverts, and abusers. But there are still good people out there, even in Hollywood.