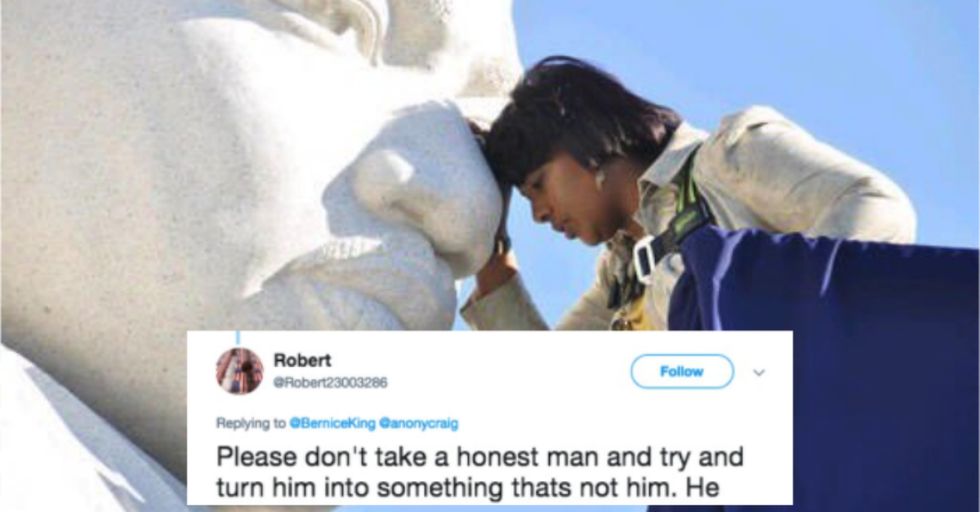 As more people join the #TakeAKnee movement, it's impossible not to draw a line connecting the protests of today to those in the past. Very few people are as qualified to compare the two than Bernice A. King, the daughter of world-renowned civil rights activist, Martin Luther King Jr.

However, when she tried to tell the world about her father's protests and the way he was perceived by others, the Internet responded as it is all too often wont to do: A Mansplainer came to the "rescue" and told her all about how wrong she was... about her own father.

Bernice A. King is a minister, CEO, and the youngest daughter of Martin Luther King Jr. and Coretta Scott King.

She's also an active Twitter user. She uses the platform as a place to share her father's legacy and continue the King family tradition of advocating for civil rights for all people.

In light of the recent NFL protests, King has started tweeting comparisons between her father and the athletes who have chosen to #TakeAKnee.

She has pointed out that although Martin Luther King Jr.'s own protests took place decades ago, the issues of racism and the corrupt systems that inspired them are still prevalent today.

She also called Donald Trump out for trying to make the #TakeAKnee movement about him rather than acknowledge what people are actually protesting.

When @POTUS calls a @NFL player nonviolently protesting racism/police brutality a "son of a bitch" & many cheer, greatness is distant. #MAGA
— Be A King (@Be A King)1506208913.0

Just as a reminder: Colin Kaepernick started his protest against police brutality and racial injustice while Obama was in office. But that hasn't stopped Trump from making them about himself by commenting on the peaceful protests and calling those who participate in them a "son of a bitch."

King provided the important reminder that although her father is revered by many today, he was seen as an agitator when he was protesting against injustices.

It's similar to the way many are speaking about the protestors in the #TakeAKnee movement. Although their protest is silent and nonviolent, the rhetoric used against them is extreme. They're accused of disrespecting the flag and being unpatriotic.

King also pointed out the hypocrisy of people who often quote her father today in an attempt to deter protestors.

She says that many who turn to Martin Luther King Jr.'s words to discourage others from protesting would actually have hated him in real life. It was at this point that a man turned up on Twitter with the most inappropriate response...

Luckily for King, a man was available to explain just how wrong she was about her father.

What would we do without mansplainers? Answer: live our lives in peace. Maybe he didn't realize he was talking to MLK's daughter, but his tweet was pretty uncalled for, regardless.

Obviously, people were quick to point out to the mansplainer just how inappropriate his tweet was.

It's one thing to give your opinion when no one asked for it. But to act as though you knew a man better than his own daughter? That's pretty darn bold.

It was around that time that we imagine the mansplainer probably wished he could crawl into a hole.

Not only was he mansplaining; he was also whitesplaining — condescendingly explaining something to a person of color while assuming they don't understand it themselves. It gets even more egregious.

The mansplainer tried to make the point that people who are protesting by taking a knee at sports games are not protesting peacefully enough.

Luckily, there were plenty of people ready to point out that taking a knee is, in fact, about as peaceful as a protest could possibly get. Are you really going to tell someone they're kneeling too loudly?

It's nice to know that even though mansplainers lurk within Twitter, the social platform is also filled with people who will show mansplainers just how unwelcome they are.

While everyone rushing to King's defense was great, her response to the mansplainer was by far the best part of the entire exchange...

King calmly thanked the mansplainer (who is a veteran) for his service, and then explained that the meaning behind the #TakeAKnee protests.

Thank you for your service, MSGT. Robert. The #TakeAKnee protest is about eradicating racism/police brutality; not… https://t.co/1qaCCfLRTW
— Be A King (@Be A King)1506349999.0

We could all learn something from King. Her father would undoubtedly be proud of her.

The next day, King revealed that she had lost 8,000 Facebook followers, presumably because of her posts regarding the #TakeAKnee movement.

She explained that the loss didn't make her sad, however. She realizes that some people are happy to take her father's words out of context without taking the trouble to learn about how he was actually viewed in his time.

But that's not how history works.

We don't get to erase the inconvenient parts of history so that it better suits our own narrative. In a perfect world, we'll all move beyond the need for protests against racial discrimination and police brutality and there won't be a need to protest. But if there is, let's hope the next generation remembers how Colin Kaepernick and his fellow protestors are being viewed today, and strive to do better tomorrow.