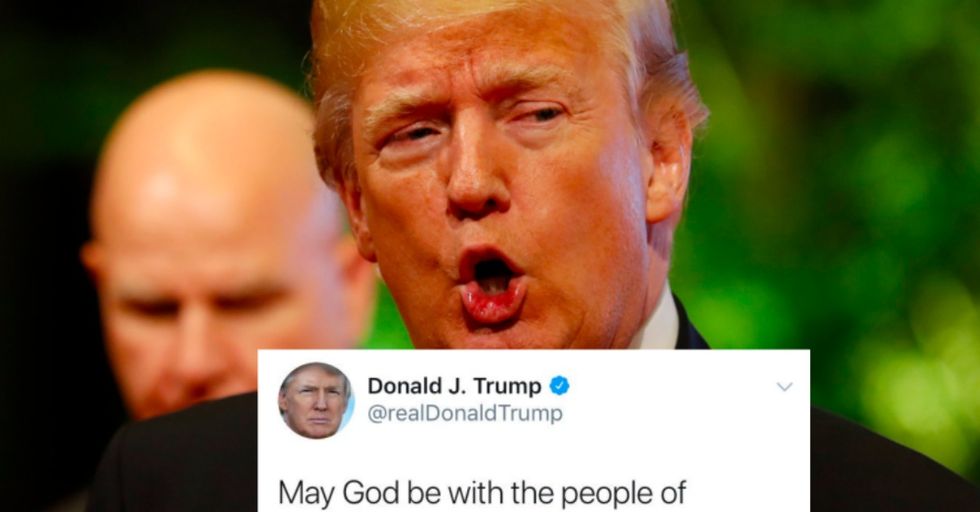 We all make mistakes. But when you're the President of the United States and you mix up your mass shootings in your "thoughts and prayers" tweet, well, it's going to be written about. Because it's insane! Yesterday, five people were left dead after a mass shooting in Northern California. It is a tragedy on an unspeakable level, and the president should have made a public statement about it. The problem is that when he tried to, he mentioned Sutherland Springs, Texas, the location of the last major mass shooting. So many shootings, ya know, just can't keep 'em straight!

This is the world we live in.

Though the tweet is now deleted, many obviously took screenshots once they realized what had happened.

On Tuesday, November 14, there was a mass shooting that resulted in five deaths. It occurred in Rancho Tehama, California. That evening, President Donald Trump tweeted, "May God be with the people of Sutherland Springs, Texas. The FBI and Law Enforcement has arrived." Of course, many pointed out that the Sutherland Springs, Texas shooting occurred more than a week ago, and no, it didn't take law enforcement nine days to get there.

Now, Trump has been traveling in Asia, he probably has his time zones mixed up, sure. But he also has so many people around him who should have been able to prevent him from clearly copying and pasting a tweet from a different mass shooting.

Think about how awful you felt the one time you wrote a cover letter and left the name of the wrong company in there when you sent it to your dream job. Now multiply that by a billion. That's the scope of Trump's mistake.

Some people didn't even believe that Trump really did what he did. But to be honest, that's a pretty familiar feeling these days.

The tweet was up for about eight hours before it was taken down. Eight hours! For the equivalent of one whole standard workday, Trump's egregious mistake lingered on Twitter, flapping in the wind as if to say, "Ah, who even knows anymore? People who die in mass shootings are all the same. Not worth mentioning enough that those dang liberals suggest regulating our guns again!"

The fact that this could have even happened indicates how bad the problem has become.

@realDonaldTrump Jesus H. Tap-dancing Christ, did you just copy/paste without updating? Is that how routine this ha… https://t.co/CGF4huu91Q
— Tennesseine (@Tennesseine)1510722584.0

There have been more than 300 mass shootings in the U.S. in 2017 alone. While it's absurd and awful that Trump tweeted about the wrong one, it's also a clear indicator that this is beyond out-of-hand. It has been for years. And we're doing nothing to stop it.

Of course, as crazy as tweeting about the wrong mass shooting is, it's not even the craziest thing that's happened this week when it comes to Donald Trump.

The President of the United States is tweeting at midnight about the wrong mass shooting and it's like the 500th mo… https://t.co/91MmOQc9yW
— Matt McDermott (@Matt McDermott)1510723856.0

While our citizens are routinely dying from an epidemic caused by guns, we're also in the midst of the greatest political scandal of all time. Trump nominated a ghost hunter who's never tried a case to a lifetime federal judge position. Everything is insane. The mass shooting happened in Rancho Tehama, California. Trump didn't correct his tweet or send a new one, but he did tweet that while in the Philippines, he was "forced" to watch CNN, and he "realized how bad, and FAKE, it is. Loser!" This, again, is the world we live in.