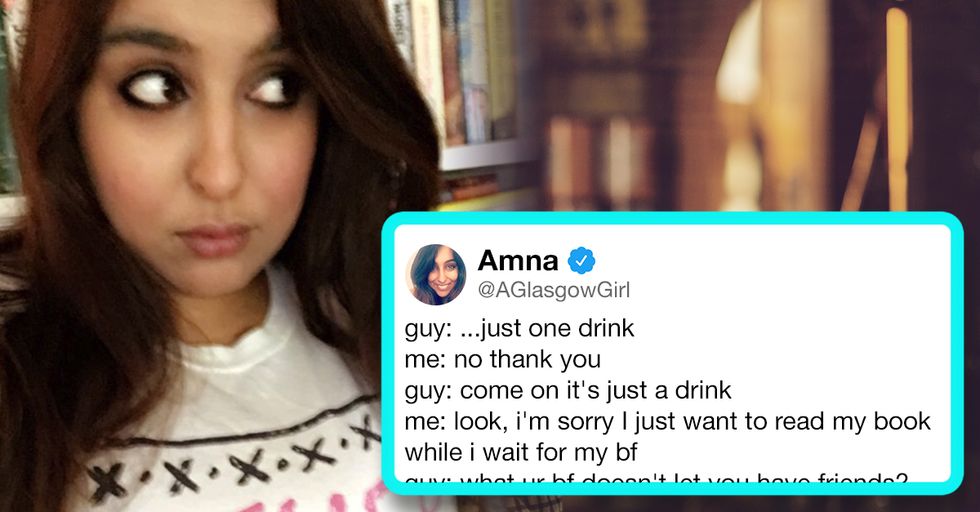 One of the things most women learn as they grow up is how to gently rebuff the unwanted advances of a man. You have to be firm, but not aggressive; polite, but not cowed. It's a delicate balance. And all too often, some men choose not to take no for an answer and continue to insist you let them buy you a drink.

A writer named Amna Saleem recently found herself in this particularly difficult situation. It was at that moment that another woman stepped in and saved the day.

Saleem was at the bar when a guy approached her and offered to give her a drink.

Ahhh, it's a tale as old as time. Girl goes to bar. Boy sees girl. Boy decides to hit on girl... then refuses to take no for an answer.

Luckily, another woman saw Saleem's struggle and swiftly stepped in:

In case you didn't pick up on it, this random woman was a total stranger who just pretended to know Saleem in order to extricate her from the creepy guy situation. Saleem sums it up nicely by saying: "Women are great." They really are, aren't they?

Women immediately started chiming in with their own encounters with thirsty men at the bar (and I don't mean thirst for drinks):

Like this woman, who tried to help her friend out and ended up being the new target. Seriously?! How did that guy think this was a good option?

This woman has another great idea for women trying to help other women:

Next time you see a woman in a tricky situation, approach her and ask how "Mary" is doing. Who's Mary, you ask? Mary doesn't exist. She's a fictional person whose purpose is to give you something to talk about. Pretty brilliant, right?

At one point, a man spoke up on Saleem's viral Twitter thread to ask for advice on what men can do in similar situations.

Obviously, there are men out there who don't put women in uncomfortable situations like the guy Saleem was dealing with. After this guy asked for advice, Saleem and others gave him a bunch of brilliant ideas...

Saleem herself said that a stranger once intervened in a similar situation by telling her that her friend was waiting for her.

Smooth! Sometimes all it takes is a simple interruption to get the aggressors to leave women alone.

This woman shared her story of a heroic bus driver:

Rather than letting her wait outside by herself at 3 a.m., he stood outside too, all while explaining that he was just standing there so she wouldn't be bothered by anyone else. This guy truly went above and beyond.

This woman shared a story of a rescue truck driver bringing his girlfriend along to pick her up:

@tokuswag @AGlasgowGirl I was once rescued by my rescue service when my car broke down on the A3. The driver got ou… https://t.co/tXMRnmXI61
— legionseagle (@legionseagle)1516630843.0

"I thought you'd be happier if there was another woman with us for the drive back," he said. All it takes is thinking about how other people might feel in a situation and doing your best to alleviate and discomfort.

This guy's sister had the right idea:

It's obviously pretty bonkers that his sister had to teach him how to step up for women who are being preyed upon, but it's great that there are men willing to learn the lesson anyway. So take note! Next time you see someone in a situation that is clearly uncomfortable, remember these tips to try and help them escape.

It's the right thing to do. In this case, it ended up with a "happily ever after":

The more women who band together against creepy dudes, the better. And if you're a guy, obviously, don't be creepy. It's as easy as that.