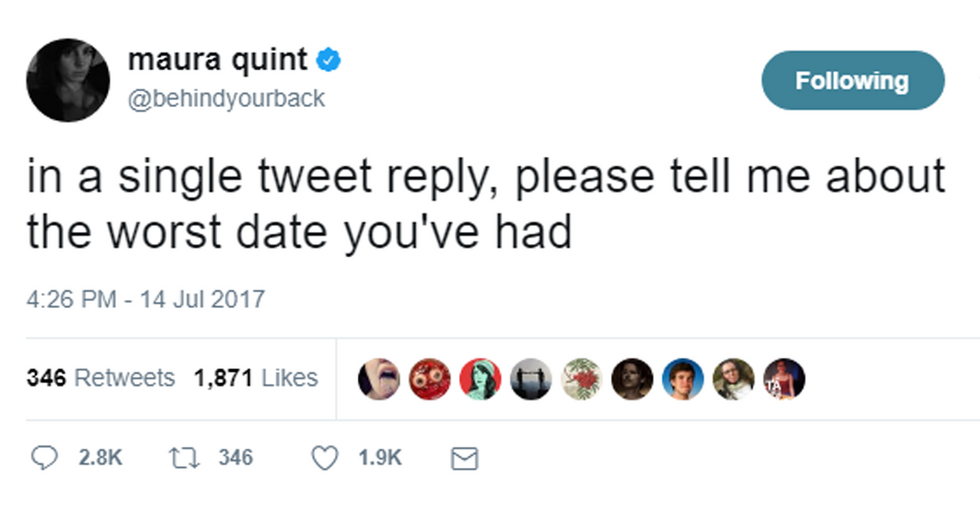 Either way, you just sort of want it to be over.

We've all had a bad date or two in our lives, but have you ever had one worse than the doozies these people confessed to in a viral Twitter thread over the weekend?

It started on Friday, when writer and humorist Maura Quint (who goes by @behindyourback on Twitter) asked her 69,000 followers to share their worst dating experience.

Hold on to your dance card, folks because you're in for some serious dating twists and turns.

First things first, though — if you saw the thread yourself, you might be wondering if anything came of Quint's uber-meta reply to her own tweet.

As lovers of all things meta (and all things that make us LOL on Twitter), we reached out to Quint and made her an offer — in the form of a donation to the charity of her choice. Fittingly, because the thread's all about dating, Quint chose RAINN as the beneficiary. RAINN is the nation's largest anti-sexual violence organization, which operates the National Sexual Assault Hotline (800-656-HOPE) and helps victims of sexual violence. If you enjoy this thread as much as we did, consider donating to RAINN alongside 22 Words, and help make some good come from all these terrible, horrible, no good, very bad dates. But for now, belly up to the bar because we're serving up some delicious dating disasters.

People were on board with Quint's request immediately, for obvious reasons.

There's just so much potential for drama here. So. Much. Drama.

People didn't hesitate to respond, and the bad dates they recounted ranged from straight-up hilarious to downright scary.

Some just make you scratch your head.

Is this like that whole, "If you ain't first, you're last" thing from Talladega Nights? Because it almost sounds like it makes sense at first. But it most definitely does not actually make sense.

Still, that's better than being stuck on a date with someone who, frankly, probably shouldn't be allowed to speak at all.

Um, say what? The fine people of Twitter tried to soften this guy's harsh, but I'm not sure if they made it better or worse.

Because no subject is too sacred to escape the biting wit of Twitter.

Great, now I can't get that song out of my head!

Well, this certainly escalated, if not quickly.

Waiting five years to take it to this level almost makes it even creepier. When someone optimistically suggested that, just maybe, this was actually a sign of a really great date, the woman said of her borderline psycho stalker, "No it was terrifying. It had pictures of me he had taken from Facebook, and a series of weird lies. Any email I sent him was on the site, etc."

If that's not enough to make you want to stay single forever, imagine going on this date.

There's never, I repeat never, a good time for mansplaining. But if there ever were a good time, a first date sure isn't it. At least this one had a happy ending, as she reports, "Fortunately, it got SO heated that I got to check 'dramatically storm off from a bad date' off my bucket list." So...yay?

The mansplainer is just about as bad as this guy:

In fact, they're probably the same guy. You know the type, ladies. WE ALL KNOW THE TYPE.

Whatever you do, it's generally considered bad form to take your date to visit your current significant other.

Things are already awkward enough on a first date. There's no need to make it worse. Of course, instead of meeting your date's current boyfriend, there's always the possibility that your date will leave with her next boyfriend...

Kind of stings when that new boyfriend isn't you.

If it helps, you're way better off not getting into that Uber. Leaving with a sketchy crowd could be dangerous, and that's to say nothing about what kind of sketchiness you might find when you get to your destination.

I'm sorry, you want me to do WHAT?

I've been out of the dating scene for a while now, but apparently there's no shortage of twisted weirdos out there.

Don't be alarmed, the sound you hear is just me retching up everything I've ever eaten.

Really, I think Quint's response says it all.

Sorry for the language, but if you don't think a virtual stranger biting your fingernails off on a date warrants at least one f-bomb, then maybe this isn't the Twitter thread for you.

If weirdos are looking for someone who will swipe right on their cage fetishes and fingernail biting, it kind of makes being second choice sound not so bad.

Before this Twitter thread, I'd have thought there was nothing worse than being runner-up for somebody who's stuck in the friend zone. It's looking pretty good by comparison now! There's really no need to be rude, though. On the plus side, occasionally you'll have a date that's so bad it's good, and it (almost) restores your faith in dating.

Frankly, sometimes you can almost see how a good date could go wrong.

"I believe he thought I would be impressed by how he was cleaning up our filthy streets," she clarified. Recycling is awesome, just maybe save it for the second date? And maybe keep it out of your pockets?

Sometimes people are in such a rush to make a good impression, they make a terrible one instead.

Okay, we get it, you're into physical fitness. Good for you. I'd offer you a cookie, but I'm guessing it would lead to a five-hour discussion about carb loading so no thanks.

But this guy really has no excuse for his behavior.

Where's that GIF of a badger nope-ing off a cliff when you need it?!?

A few times, humble tweeps came to the thread to admit to the part they'd played in making their own dates a disaster.

It's always a good idea to be clear about basic details, like exactly who's dating who, when you ask someone out. This isn't the only issue that can arise when people's signals get crossed, though.

It's just as important to be clear about how you think the date is going — except when you're really, really wrong.

Confidence is a good thing, just maybe not this much confidence.

Discussing politics and how irresistibly loveable you are aren't the only ways to turn off your date. You can also take your date to a pizza buffet at "CiCi's so basically a Chuck E. Cheese but with the ball pit."

There's no ball pit in this date, but this whole story just goes from bad to worse.

Okay, I can see his couponing possibly being a plus to some thrifty people out there. And running out of gas is inconvenient but come on, the guy is clearly short on cash here. Or is just really, really cheap.

But in her defense...

Being in fashion is good. Just try to make it fashion from this decade. How did she handle things after bolting? "I had a class with him and stopped going so I'd never have to see him again and failed the class and it was worth it." #NoRegrets

Plenty of people on this thread got skeeved by the mere mention of being introduced to someone's family on a first date. Hopefully these two had agreed to her bringing her family on their first date beforehand!

Not to one-up that last date, but this family affair might be even worse.

Ding ding ding, congratulations! She discovered a way to make standing someone up for a date even more humiliating, by inviting her mom to witness it!

Frankly, the number of deal breakers people ran into while treading water in the dating pool was sort of astonishing.

It's a little surprising that anyone ever gets to a second date, now that I think about it.

In the end, part of what makes this whole thread so awesome is that, as ridiculous as these dates were, they're so relatable.

When push comes to shove (into somebody's closet cage), even the best dates can't compare with television and your own couch.

So what lessons can we learn from all this?

If you're still going to attempt dating after reading this, I'll agree that these are excellent tips. And we probably should keep trying; if we all just sit at home drinking vodka alone instead of dating, it might mean the end of the species. Of course, some of these tweets make you wonder if that's a good thing or a bad thing...but at least we have Twitter threads like this one to entertain us until we can all figure out how to marry Netflix.