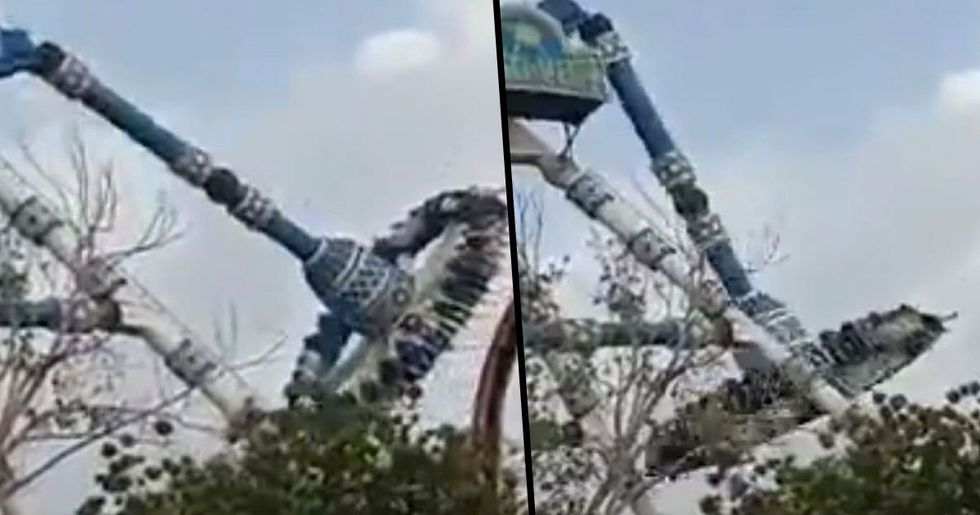 Theme parks are always hit or miss - you're either a thrill-seeker who simply can't get enough of the high-speed rollercoasters, or you're one of those who would much rather steer well clear from the adrenaline-inducing death traps and stay firmly on the ground.

I must admit, I'm guilty of being one of those thrill-seekers who will stand in a 3-hour queue for ninety seconds of intense, adrenaline-spiking fun.

But recent events at a theme park in India have made me doubt whether I'll ever let myself be strapped into a rollercoaster again.

Keep scrolling to learn of the terrible tragedy that unfolded at the hands of a careless theme park and to see the video of the accident (warning: it's not for the faint of heart).

Theme parks attract millions of visitors around the world each year. From theme park giants such as Six Flags in the US to much smaller parks in suburban areas that are designed for families and young children, these parks are usually the key to a great day out.

Rollercoasters are generally very safe, and the odds of them breaking and injuring guests are pretty much 1 in a million.

The beautiful country homes many theme parks, including Adlabs Imagica in Khopoli and Kankaria Adventure Park in Ahmedabad.

The park, which is owned by Superstar Amusement Private Limited, is well known for its selection of thrill-seeking attractions. One of its most popular rides is "Discovery," a pendulum ride which is based on the motion of a fixed pendulum. The configuration consists of a gondola, an arm, and an axle that sends riders swinging through the air left through and right.

Pendulum rides are enjoyed for their height and high-speeds.

Which is what makes them so popular for all age groups. They do come with risks, however...

All rollercoasters come with a small risk.

A statistic found that the chance of death on a rollercoaster is likely to happen to 1 rider out of 250 million - so it's pretty slim. Faults on rides are usually down to human error, but there's always a slim chance of technical errors occurring.

Footage was captured of Discovery in action.

A guest at Adventure Park was filming the Discovery ride in action on Sunday, July 14th, which was a busy day for the theme park. The man, whose Twitter name is @shishir1986, uploaded his video to Twitter yesterday and it's had a huge reaction.

The moments leading up to the accident...

The footage begins when the ride sets off and it's seen to be gradually building in height and speed.

As the ride makes its highest swing...

The horrifying moment is captured in the video. The main arm of the ride snaps cleanly in half, sending the bottom half of the arm crashing down to the ground - that part of the ride held over thirty passengers.

The sound of the ride hitting the ground is deafening, and it's almost impossible to fathom the fact that there are people still strapped into it. The crowd can be heard screaming, and many begin running towards the ride in aid of the unfortunate guests still strapped in.

2 people sadly passed away from their injuries...

The 2 people who died have now been identified as twenty-four-year-old Manali Rajwadi and twenty-two-year-old Mohammed Javed. Twenty-six other riders were immediately rushed to hospital once they were broken free from their straps.

An investigation has been launched.

The investigation aims to figure out the cause of the incident and if the theme park even has a proper license to operate the ride.

Was it due to the ride being at its maximum capacity?

This shouldn't be a reason for a ride to break in this way, but, according to reports, the ride was holding thirty-one passengers when it fell to the ground. Police spokesperson Vijay Nehra said: "An inquiry has been ordered. Police, along with a forensic team, reached the spot to find out the reasons behind the accident."

Victims were covered in blood and were screaming for help.

Fire brigade spokesperson, Dastoor, spoke about the incident: "There are 32 seats in the ride that go round. The pipe of the main shaft broke and crashed on the ground."

The mayor had his say...

Ahmedabad Mayor Bijal Patel said: "An inquiry will be conducted to ascertain as to what went wrong, and steps against those responsible for the fault will be taken soon."

The accident follows a similar one in Uzbekistan...

Earlier this year, a nineteen-year-old girl lost her life when riding a pendulum ride at Istiklol amusement park. In an incident worrying similar to the one on the Discovery ride, this rollercoaster also snapped clean in half and went plummeting to the ground with numerous guests strapped in.

The amusement park is located on the bank of the River Sanzar in Jizzakh, which is 125 miles south of the capital city, Tashkent. Uzbek authorities said that the young woman was killed, although they did not specify how many other riders sustained injuries - it's clear, though, from the shocking footage that many will have been seriously hurt.

There must be someone to blame in these incidents.

The fact that two, basically identical, rides both suffered the exact same faults clearly indicates that there is something that needs to change in the manufacturing of these mechanisms. Councillor Baddrudin Sheikh of the Indian National Congress political party blamed the governing Bharatiya Janata Party, saying: "The ruling BJP failed to ensure regular maintenance. A complaint of negligence should be registered against [the] authorities."

It may take a few more weeks to confirm what exactly happened to make the ride malfunction in the way that it did, and one can only hope and pray for the families of the deceased and the injured guests that justice is served. Something clearly isn't right with the ride, and the correct procedures have not been followed in order to keep the guests safe. This is a developing story, so stay tuned to hear the latest updates.

Our thoughts go out to the victims and their families. Warning: This video contains content that may be disturbing for some viewers.