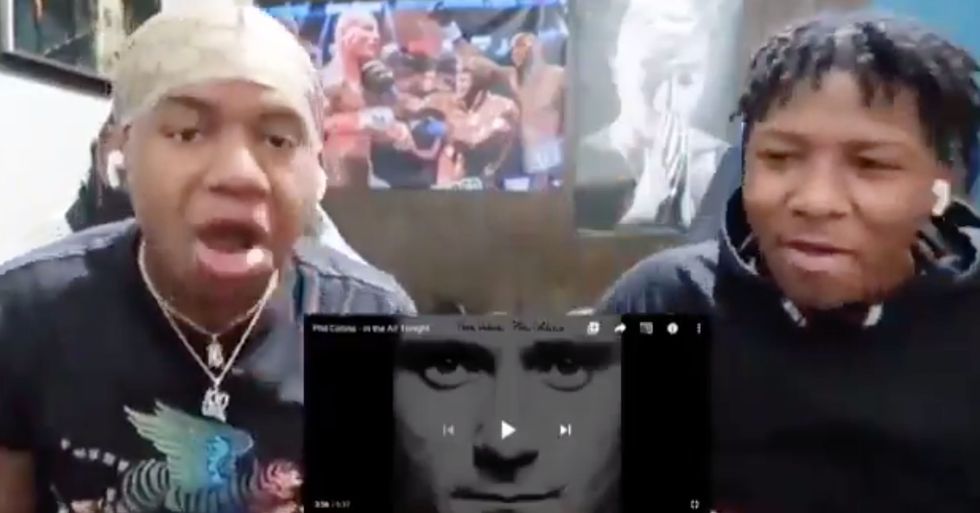 A video of a set of twins listening to Phil Collins for the first time has had the internet in hysterics...

The video series sees the twins reacting to classic tracks for the first time.

Tim originally came up with the idea for the series to broaden the duo's music horizons.

Speaking to People Magazine, Fred said: “There’s more than just rap out there. There’s so much more than I ever thought."

His twin says the pair are open to all genres.

"We wanted to start a new trend to appreciate old music. We’re open to all genres. We also want to bring people together because there’s no color to music," Tim explained.

And it's brought them a ton of success on the platform.

In fact, they recently received their 100,000 subscriber plaque, although now their subscriber count is close to 400,000.

As part of the YouTube series, the duo have reacted to some of the biggest hits from '70s and '80s.

Including “Jolene" by Dolly Parton, “Dancing in the Dark" by Bruce Springsteen, and Janis Joplin‘s “Piece of My Heart."

The series has gone down a treat with viewers.

But the latest episode has been hailed as the best yet.

The pair decided to film their reaction to Phil Collins' 1981 hit, "In the Air Tonight."

And it's safe to say, their reaction was golden.

"In the Air Tonight" was the debut solo single by the British drummer and singer-songwriter.

The song was an instant hit at the time, climbing to No. 2 on the UK Singles chart.

It has long been considered a classic...

And it has remained timeless, with people still loving it nearly 4 decades on.

It's pretty baffling how Tim and Fred haven't heard the track before now.

But either way, their reaction to it was pure gold.

As the song goes on, the pair really get into it.

But when the song reaches the infamous drum solo, the brothers are left completely shook.

They looked to be well and truly sold on the track.

And, after the clip went viral, reactions to their video came pouring in.

Watch their hilarious reaction below:

These 2 teens listening to In The Air Tonight by Phil Collins for the first time is absolute gold https://t.co/L3QhbKf0hV
— Dakota Fuqua (@Dakota Fuqua)1596774820.0

We can't wait to see what they react to next!