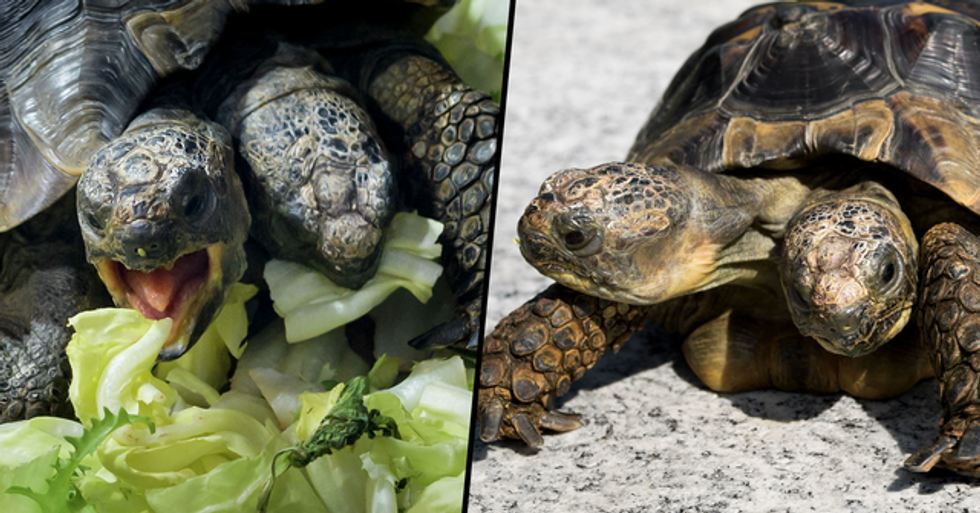 New photos have emerged of an incredibly rare two-headed tortoise who recently celebrated a milestone birthday...

Amid all the grim stories of bush fires, coronavirus, and police brutality, there has been so much uplifting news regarding these loveably slow and steady creatures.

For decades now, a whole array of tortoise species have been at risk of extinction...

But, in recent years, efforts to bring their numbers back up have been doubled down, and they have had excellent results.

The headlines surrounding these animals have been overwhelmingly positive.

In February this year, a new hope was distilled into the endangered Galápagos tortoise.

Scientists made a "monumental" discovery when they found a solitary female tortoise on one of the islands where the animals were thought to be extinct for over 100 years.

The matriarchal tortoise was believed to be over 100-years-old...

And she was immediately transferred to the giant tortoise breeding center on Santa Cruz Island, where plans have been made for a return to Fernandina to try and track down a mate.

And who remembers the heroic tale of the randy Galápagos Tortoise, Diego?

For more than fifty years, trusty old Diego, who is believed to be over 100-years-old and weighs in at 175 pounds, has been the undisputed star an intensive breeding program.

Diego's contribution to the program has been particularly noteworthy, with zookeepers believing him to be responsible for around forty percent of 2,000 tortoise hatchlings.

But the most recent injection of feel-good tortoise news may be the most remarkable yet...

Because it involves a two-headed tortoise.

Named after the Roman god with two faces, this Greek tortoise was born from an egg that had been placed in an incubator at the Museum of Natural History in Geneva, Switzerland.

The unusual creature became somewhat of a mascot for the museum...

And even one of the more popular attractions.

Now, while many tortoises have been known to live for over 100 years...

Animals born with 2 heads don't tend to make it past their first couple of years.

Because, as you might assume, a tortoise hatching with two heads is incredibly rare.

And they can carry a whole array of health issues. Ernst Baard, the manager of scientific services of Cape Nature Conservation, and an expert on South African tortoises said that the phenomenon of two heads is extremely rare.

To his knowledge, there have only been two reported cases of two-headed tortoises in South Africa in over twenty years.

So, for Janus, twenty-three is an incredible age to reach.

The team at the museum has credited his long life to his strict routine.

Which includes daily baths, weekly UV sessions, a diet of lettuce and tomatoes and, unlike his frisky cousin, Diego, no sexual activity. Sorry, Janus.

And, to commemorate his remarkable birthday...

Janus is set to be kitted out with a brand new terrarium, according to EN24 News.

He is set to be moved into his new pad today...

Which is located at the level of the reptile gallery.

Be more like Janus. For more uplifting tortoise news, keep scrolling to see the couple who match their outfits with their pet tortoises...