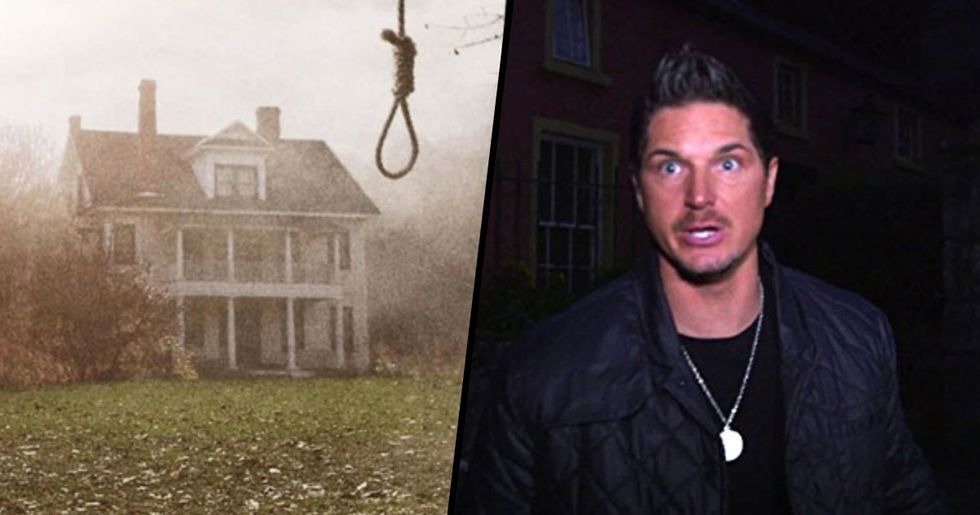 Horror fans have long enjoyed the Conjuring franchise - a truly bone-chilling haunted house movie series that keeps on giving, in terms of scares. But what makes these movies all the more terrifying? It's those fateful words: "based on a true story."

Ghost hunters, Ed and Lorraine Warren, contributed their spooky experiences to the horror movie - particularly focused around the Perron family and their haunted Rhode Island farmhouse. Since the film's release, an adventurous - and brave-hearted - couple from Mexico has purchased the property and moved right on in. But things aren't going as smoothly as they may have hoped - and their reports about what goes bump in the night will freak you out.

The now popular, paranormal documentary, Ghost Adventures, has focused an entire episode on this haunted house - and crew members have revealed the creepy things that happened behind the scenes.

Whether it's true crime, legendary monsters, unsolved mysteries, or paranormal activity, there's something about creepy things that have an undeniable draw.

Perhaps one reason for its success, is that it plays into a favorite horror film trope - that of the haunted house.

The fact that the events of these films are all based upon true stories. The inspiration behind The Conjuring franchise are experiences shared by real-life paranormal investigators.

Their names are Ed and Lorraine Warren, and they were essentially ghost hunters. You may be more aware of their most famous case, The Amityville Horror.

The eldest of the Perron children, Andrea, has recounted horrific memories: "I thought I was going to pass out. My mother began to speak a language not of this world in a voice not her own. Her chair levitated and she was thrown across the room."

The couple have shared some of their creepiest moments since they've moved into the supposedly haunted property - and we have to say, we're feeling pretty spooked.

But now horror fans have some even more exciting news.

Now the house from The Conjuring has hit our screens again - but in quite a different (and potentially even scarier) way.

Because it's now a part of an episode of a very popular horror documentary series.

Ghost Adventures first aired in 2008 and it follows hosts, Zak Bagans, Aaron Goodwin, Billy Tolley, and Jay Wasley as they investigate the most "haunted" locations on earth.

And their latest scoop?

Halloween is going to be extra spooky! The #GhostAdventures crew will investigate the house that inspired… https://t.co/oGG5rdHn2a
— Ghost Adventures (@Ghost Adventures)1563741766.0

To maximize the creepiness of the undoubtedly iconic episode, Ghost Adventures have decided to air the upcoming ep on the spookiest holiday of all - Halloween.

If you take into consideration the contemporary accounts of the Perron family, plus the claims of the new inhabitants, it seems as though Ghost Adventures won't be short on spooky content.

The show tends to follow a fairly typical formula.

It shows the four hosts investigating different paranormal phenomena in a location over a few days - or, to up the spooky factor, nights.

And we're sure that this location won't disappoint.

The fact that it's gained such a reputation as one of the most haunted locations in America means that it's a real find for Ghost Adventures.

Will we see scenes like the most iconic ones from the movie?

Maybe! Ok, probably not. But what the crew has revealed about the filming experience still sounds pretty damn creepy.

This Halloween special is a whopping two hours long - meaning it's basically a feature film in its own right.

The backstage secrets have many fans excited.

Halfway thru this iconic investigation most people have heard about from The Conjuring. Many new details uncovered… https://t.co/h65KG4hDfR
— Zak Bagans 🧛🏻‍♂️ (@Zak Bagans 🧛🏻‍♂️)1565364307.0

And judging by what Zak Bagans said on Twitter, the documentary is going to be a must-see for any horror fans.

People on the internet are excited.

Fans of Ghost Adventures already had high hopes because of the quality investigations that made the show famous - but the fact that they've secured such a high-profile location makes things even more exciting.

Some are even counting down the days to the documentary's release.

And it seems like the privilege of being able to shoot on location isn't lost on the castmates. “It’s scary but it’s also so iconic," Jay Wasley said. “It’s kind of an honor to be able to have this opportunity."

And some believe that the doc is going to have a huge impact.

This is the tweet of #ZakBagans he deleted directly. They are filming the Halloween special in the real conjuring h… https://t.co/EhEDdgldaF
— dutch_gacfan👻👻 (@dutch_gacfan👻👻)1565106073.0

In a now-deleted Tweet, Zak Bagens spoke about how the goings-on inside the house were so scary that many members of the cast and crew were adversely affected.

And if you think that these investigations lose their fear-factor over the years, you'd be wrong.

“There’s a fear of being in that place especially with us and how we react to ghosts and how ghosts react to us. This could be a life-changing moment, good or bad. Probably bad," said castmate, Aaron Goodwin.

And now even more details have dropped.

Host Zak Bagans dropped some terrifying behind the scenes details to the Las Vegas Review Journal.

"I was extremely ill, very sick, for about three weeks after that."

"I wasn’t myself, albeit I was on a long trip. There were things going on with me that just seemed out of the norm."

"It really, I believe, made me sick."

"I had anxiety and panic levels that were just so unusual. Just that feeling of sickness."

"I didn’t feel like myself. I didn’t wanna be around anybody. I never felt possessed, but I felt like something was drawing the life out of me."

ONE WEEK AWAY❗️ We’re taking you to the site of one of America’s most iconic paranormal cases. You don’t want to… https://t.co/mLWzLSHtXE
— Ghost Adventures (@Ghost Adventures)1571950943.0

"I had to sit down, dude. It was either run or sit because I was going down, It was just weird energy. Not normal. Not like we’ve felt before."

There's just one downside to this upcoming documentary.

It's not out until Halloween - and we're not sure that we can wait that long. And if you can't wait either, keep scrolling for the scariest things you can stream on Netflix right now.