In a fun twist, which you can see in the video at the end, the wives were the ones providing the emotional support as the men squirmed. | 22 Words 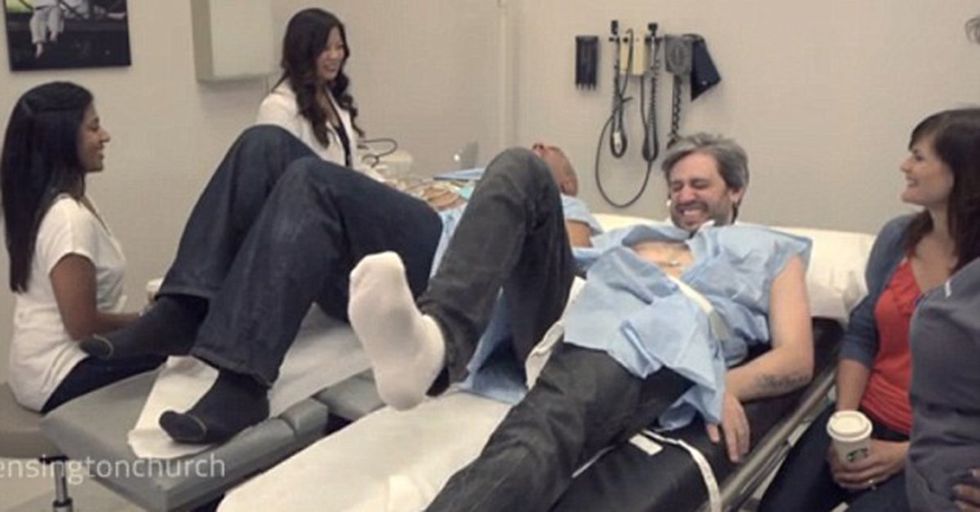 It's been said that men will never know the miracle (and agony) of childbirth, but a device known as a "labor simulator" pretty closely replicates the experience for anyone who wants to try.

If you're wondering why on Earth men would want to experience the painful event, these two husbands did it for the silliest, most macho reason ever. To prove that childbirth wasn't as painful as it was made out to be.

The men were also silly enough to have their escapade filmed for online viewing. Whoops!

The men were hooked up to electrodes attached to their stomachs and sides. They start off on a low setting to recreate the feelings of "early labor."

The men quickly realize they're in for more than they bargained for.

One husband says, with the wives looking on,"That was early labor? It feels like someone is taking a saw and just carving up my abdomen."

When the shocks are intensified to recreate the "active" labor stage, things get even hairier.

When one of the duo exclaims that he thinks they're at a seven on the pain scale, he's quickly informed by a nurse, "No, you're at a four." Yikes!

A nurse and gynecologist were on hand to oversee and film the experience!

In a fun twist, which you can see in the video at the end, the wives were the ones providing the emotional support as the men squirmed.

One husband encapsulated the whole experience beautifully and succinctly, uttering, "I'm going to throw up." He never did, but it was close there for a second.

The men quickly came around, referring to their own mothers (and presumably mothers everywhere) as "heroes."

The craziest part? The men were only on hand for two hours of labor simulation. The average labor is about fourteen hours, meaning these guys only got a small taste of the agony that so many women endure in the name of family. The wives celebrate, knowing the point has been made...then underlined.

Remarkably, the stunt may have turned the husbands off from having kids...for their wives' sakes.

Said one of the two, "It was torture for me," Zeno said afterward. "I don't know if I dare make my wife pregnant."