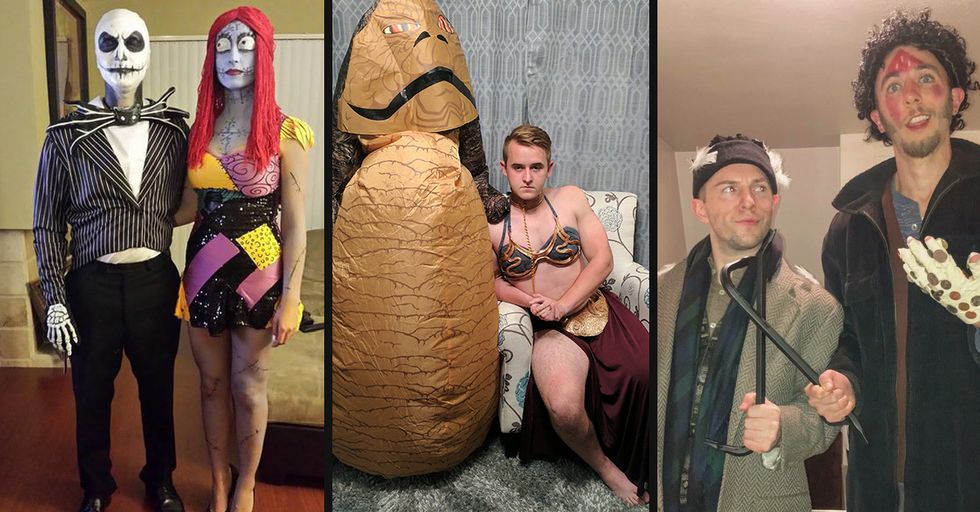 Out of all the holidays in a calendar year, Halloween is the most fun. I mean, it has candy and costumes. What more could you ask for? Pumpkins, maybe? Well, it has those, too!

But if you're looking for a way to make your Halloween even more fun, you're going to need a buddy. This can be your significant other, your BFF, or even a guy from your Geometry class if you're really desperate. Once you've secured your other half, it's time to create the ultimate Halloween costume: a two-person costume. Also known as a couple's costume, but there's no Halloween law stating that you have to be romantically involved with someone in order to dress up in coordinating outfits.

We've scoured the Internet and found some of the most ingenious two-person costumes the world has to offer. Hopefully, you find something you (and your partner) like!

Pick one of these costumes and you'll be high-fiving all night.

You'll also probably get high fives from everyone you meet. Everyone loves a well-executed doubles costume! Now, on to the costumes!

This costume has it all: low cost, minimal effort, and instant recognizability. In other words, it is perfect.

Peas in a pod:

This costume perfectly communicates that you and your costume partner are like...well.. Like two people who have a lot in common. There's a phrase for that, isn't there?

The Price Is Right contestants:

I love that they didn't merely dress up as contestants. This costume truly tells a story.

Twins from The Shining:

I mean, if you want to dress up as spooky twins, Halloween is the time to do it. It probably wouldn't be very well-received any other time of the year.

Joyce and Hopper from Stranger Things:

My favorite detail is the Christmas light necklace!

(AKA The Sticky Bandits.) Wow, burning your forehead with an iron for a costume? That's dedication.

(If you don't recognize them, they're from the "San Junipero" episode of Black Mirror.) What a way to celebrate pretty much the only episode of that show that didn't leave me feeling like I was having some sort of crisis!

I love a good pun! Bonus points if the pun doubles as a costume!

I'm pretty sure there's no better way to embody the entire message behind the song "You've Got a Friend in Me" than by dressing up with your friend or SO.

Eleven and a Waffle:

While the chemistry between Joyce and Hopper is undeniable, I think we all know who the OTP of Stranger Things really is. Eleven and her beloved Eggo Waffles.

Another match made in heaven. She's a very rich widow with a terrible secret and he's the man who was framed for stealing the president's rubies.

Indiana Jones and the Giant Rock:

"Hey babe, wanna do an Indiana Jones couple's costume with me this year?" "Sure! Can I be Jock, the awesome pilot?" "I was thinking something of else..."

This is probably my favorite one on the list. The best part is that any time the two of you get separated, you can scream, "WIILLLSSOOOOOOOONNN!" Everyone will love that.

People always argue over whether The Nightmare Before Christmas is a Christmas movie or a Halloween movie. This should set the record straight.

If you're the Remy in this arrangement, you get to enjoy a piggyback ride for the entire night! If that's not enough to convince you, I don't know what else to say.

Great Scott! Where we're going, we don't need costumes. (Just kidding, we do. It's a costume party, duh.)

This might be the breast costume I've ever seen.

Adventure Time may be officially over, but that doesn't mean we have to stop celebrating its genius. This costume is a totally mathematical way to do it!

I can't pretend to understand why the Internet is obsessed with moths and lamps right now. But I can appreciate a good meme in costume form.

Do you want to make everyone around you smile? Because if so, this is how you do it.

Rapunzel and Flynn Rider (AKA Eugene):

Are you wondering, "When Will My Life Begin?" Well, "I See the Light," and the answer is: right after you put on these costumes.

Cool, cool, cool. Just go ahead and summon the Dark Lord with your Deatheater tattoos. What could go wrong?

The Dread Pirate Roberts (AKA Westley) and Buttercup:

You say you're looking for the perfect Princess Bride-inspired costume? As you wish.

Dorothy and the twister:

Plenty of people have done the Wizard of Oz thing, but not many choose to include the twister itself! Great idea, amazing execution! 10/10!

If this doesn't instantly transport you back to a simpler time in your youth, then I don't think anything will.

It's Double Stuf, so you know it's good. Just make sure no one tries to dunk you in milk!

Jabba the Hutt and Slave Leia:

This is not what I would have assumed a "Jabba and Leia" costume would look like. It's much, much better than imagined.

Say it with me now: Awwwwwww! Share this with your future costume collaborator!