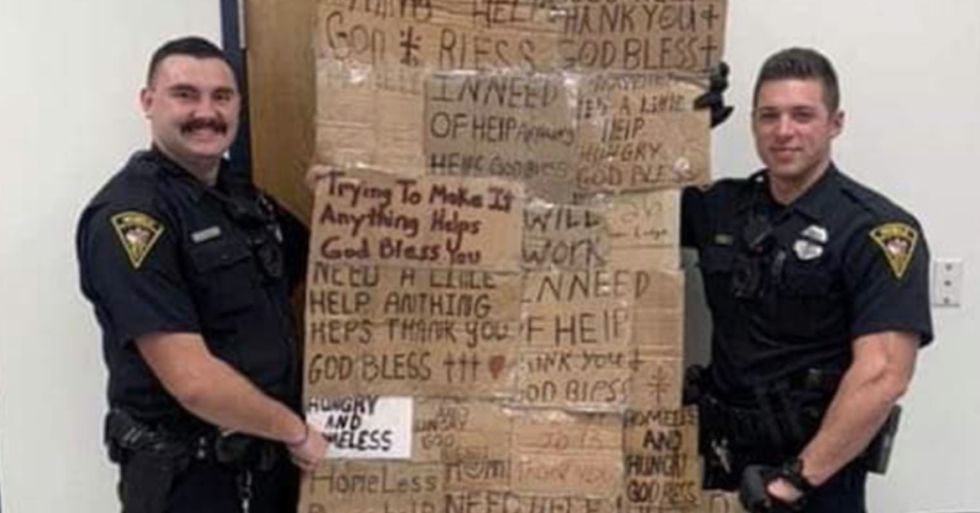 Appalling images have surfaced from Mobile, Alabama, of two police officers treating the homeless almost as if they're subhuman. After being posted online, the images quickly went viral, sparking outrage and disgust from people all over the world.

Keep scrolling to hear the full story and to see these horrific pictures.

A homeless person may even be invited to sit down and enjoy their food like any other normal person.

Or so you'd hope.

But one police force, from Mobile, Alabama, seems to have quite a different idea about how to respect other human beings.

They're a great (and cost-effective) way to help them communicate with a world which just wants to ignore them.

But, for the police in Mobile?

Well, these signs gave them a pretty horrific inspiration.

They thought all of these signs could fit together.

And using signs confiscated from some of the most vulnerable people in the USA, they decided to craft a terrifying "quilt."

Well, the two officers decided to post the image of their creation on social media, for the whole world to see.

And the caption they wrote was even worse.

"Wanna wish everybody in 4th precinct a Merry Christmas, especially our captain. Hope you enjoy our homeless quilt!"

But, as everyone should always remember - the internet is forever. The photo was quickly screengrabbed and shared on Twitter.

And, as you could probably expect ...

@spookperson People like this should be made to live the life of the homeless for a week minimum in order to learn… https://t.co/RGcHVK9oTM
— James (@James)1577753556.0

People online are absolutely disgusted by what they're seeing.

Many first couldn't believe what they were seeing.

@spookperson The future seems so bleak! When I first saw this picture, I honestly thought this was some sort of shr… https://t.co/kss1iGJXKa
— Laura JT (@Laura JT)1577778834.0

Because to witness this level of heartlessness just seems completely unnatural to the vast majority of us.

And it seems the police have lost touch with their own humanity.

As the picture proves.

Mobile Police Department Chief Lawrence Battiste has spoken out against the picture.

"As a police department entrusted with serving and protecting our community, we offer our sincerest apology for the insensitive gesture of a Facebook post by two of our officers where they are holding up a homeless 'quilt,' made of panhandling signs," he said in a statement.

"Although we do not condone panhandling and must enforce the city ordinances that limit panhandling, it is never our intent or desire as a police department to make light of those who find themselves in a homeless state."

"Rather, our position has always been to partner with our community service providers to help us help those faced with homelessness with hope to improve their quality of life."

Administrative action has been taken, although it's unknown if the officers questioned will face any sort of punishment.

Charlette Solis, spokesperson for the department, said, "The two officers' behavior of taping the signs was definitely immature and insensitive and in no way indicative of the department as a whole and not something that is approved of and practiced."

The officers have been named as Preston McGraw and Alexandre Olivier.

And in spite of the controversy, they will remain on active patrol until the investigation reaches its conclusion.

Unsurprisingly, many are unhappy about this.

The department's Facebook page has been flooded with comments criticizing the incident over the past few days - but as to whether they'll have any impact remains to be seen. Sadly, this isn't the only issue where police have been called out on social media this year. Scroll on for a horrific story of police who walked a man through the streets on horseback.