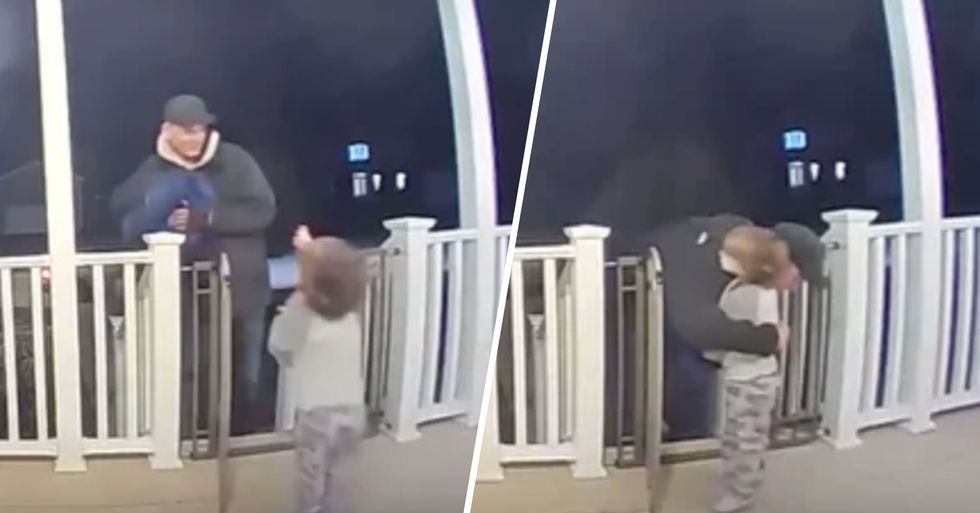 A wholesome encounter between a two-year-old boy and his local pizza delivery driver has gone viral this week.

The delivery driver, who had tragically lost his own daughter just a week earlier, received a huge hug from the youngster, who had temporarily and unknowingly eased the man's grief.

Keep scrolling to hear the full story, and to watch the heartwarming footage for yourself.

In life, it is always important to be kind.

Because you never know what a person may be going through behind closed doors.

Many people struggle in silence...

And often rely on the kindness of strangers to simply get through the day.

And, sometimes, these strangers can appear at the most unexpected of moments.

Ryan Catterson, who works as a pizza delivery driver for Wicked Good Pizza in West Warwick, Rhode Island, was surprised with the most unexpected act of kindness while out on a shift on Saturday night.

Ryan was delivering a pizza to the Sheely household.

Lindsey and Josh Sheely had ordered a pizza to share with their son, Cohen, from the fast-food joint on Saturday night, which was delivered by Ryan at around 7 pm.

But, little did Ryan know...

Two-year-old Cohen Sheely has a lot of love to give, and his local pizza delivery man was going to be the latest recipient of his affections.

The footage of their interaction has gone viral this week...

Simply because of how adorable it is.

It starts out as you'd expect...

Ryan delivering a pizza box to the front door. So far, so good.

But, as Ryan is letting himself out of the gate after delivering the pizza...

An excitable Cohen dashes out of the house after him.

Who, beaming from ear to ear, bends down to give the youngster a big hug back.

It was all very unexpected.

Speaking to NBC Montana, Cohen's mom, Lindsey, explained: "As Ryan was walking away, my son just bolted past me, ran out the door, and put his arms up and just gave Ryan a big hug."

The gesture clearly meant a lot to Ryan...

Who couldn't stop smiling as he stood up and spoke to Cohen. "Ryan just leaned into it, was really cute, really sweet. My son even tried to give him a kiss." Lindsey continued.

Lindsey can be seen running out to grab her son...

All while Ryan closes their gate, still smiling broadly.

The wholesome encounter was captured on the family's doorbell camera...

But it was here where Ryan got wind of the video himself...

And Lindsey quickly got in touch so she could send him a copy of the video. "Someone saw that I posted it, and told Ryan about it, who reached out to me," Lindsey explained. "He's like, 'I think I was your pizza man would you mind if I shared that?'"

But it turns out that, at the time of the encounter, Ryan had been struggling with his own family issues.

"I went to his Facebook page and saw that recently lost his daughter," Lindsey said. "He had shared that the hug just meant so much more to him and that he just really needed a hug."

Heartbreakingly, Ryan's own daughter had passed away, aged only sixteen, just over a week before the encounter.

Ryan explained that his other children live out of state and, while out at work, he'd been silently grieving while waiting for them to arrive.

So Cohen's hug meant everything to him.

"Just that it was the perfect timing for it, I had been telling my kids and the whole family how much I needed hugs before they came and then that sweet little boy gave me one," Ryan said.

"It was almost as if the universe or my daughter had known and sent it to me."

Lindsey couldn't believe it when she heard Ryan's news...

But she was overjoyed that Cohen could help to bring him some happiness. "I couldn't believe that this guy was going through the most devastating thing, but his life was still going on. His life had to go forward, and he still had to work and to do his job," she said. "You never know what people are going through. This is such a good example of that."

You can watch the beautiful encounter for yourself here...

Which stands as a poignant reminder of how far a small gesture can go. For more examples of the kindness of strangers, keep reading...