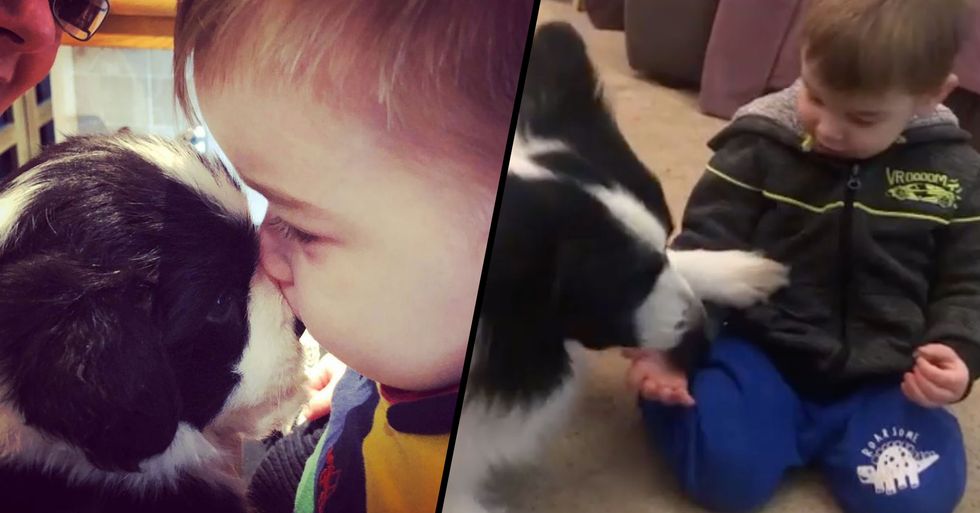 Make sure to keep scrolling to learn about the 2-year-old who considers his dog his brother...

Especially when it comes to children, dogs are known to be protective and will put their lives on the line in order to protect "their human."

Children who grow up around dogs will not only grow to become big animal lovers, but they will establish a life-long bond with their furry companions.

The Webster family can fully relate to this...

This is Tom and Laura, who are the proud parents to 2-year-old Jenson.

The family is from Leicester in the U.K...

And they are also to the proud parents to their 2 border collie-mixes - Fenn and Nova.

It goes without saying that these dogs are utterly beautiful...

And they have become a huge part of the Webster family's life.

Fenn is the youngest of the pack...

And he was actually born just 9 days after baby Jenson arrived back in 2017.

The family decided to adopt Fenn as a companion for their son to grow up with...

But they never anticipated how close the pair would become.

Jenson and Fenn are now inseparable.

Jenson took on his first milestones with Fenn by his side, including learning the occasional extra-curricular trick such as playing fetch and rolling over.

Laura even taught Fenn how to crawl along the floor in order to encourage baby Jenson...

She said, "They are, simply put, siblings - it's impossible not to love them and their amazing bond."

They are brothers in the making...

"They've literally grown up together - Jenson is recognized as the leader, but he's decided to copy Fenn when he's been learning things," she explained.

"From eating food from the plate, just like Fenn would, he also joins him in learning tricks like sit, heel round."

It is the most adorable relationship...

"They do the morning and night routine together - if Jenson is having his hair brushed, ready for the day ahead, then Fenn has to have his done too," Laura went on to explain.

Fenn and Nova are Jenson's only siblings...

"Jenson has no human siblings and Fenn became his substitute - they're best friends and completely inseparable."

This goes to show the amazing bonds that dogs can hold with humans...

Make sure to keep scrolling to learn about the heroic FedEx driver who reunited a family with their lost dog...