Tyler, The Creator Responds To Jaden Smith Calling Him His Boyfriend | 22 Words 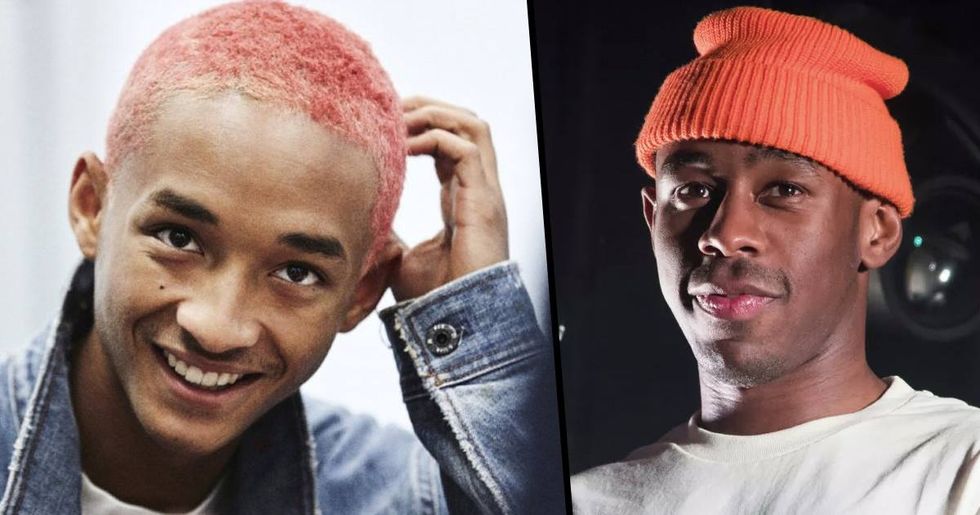 Tyler, The Creator Responds To Jaden Smith Calling Him His Boyfriend

Tyler, The Creator has responded to Jaden Smith describing him as his ‘boyfriend’ at the Camp Flog Naw festival in California.

Jaden stood on stage while making the supposed announcement, while 27-year-old Tyler watched on from the audience, wearing a mask.

The 20-year-old actor and musician surprised fans when he appeared to announce his relationship with Tyler during his set.

The 20-year-old actor and musician surprised fans when he appeared to announce his relationship with Tyler during his set.

Known for his eccentricities

He went on to say "Tyler, The Creator is my f*cking boyfriend! It’s true!". But this is coming from someone who turned up to a red carpet event with their own hair...

Tyler The Creator took to Twitter to respond to Jaden's outburst on stage.

Leaving things even more ambiguous by fobbing the claims off as "crazy".

Jaden Smith is notoriously close to his son, starring in a few films aside him, so if the claims Jaden made are true, he's going to have to impress The Fresh Prince himself.

Although Will is no longer The Fresh Prince of Bel Air, more so the Sorry Sovereign of South Park.

Given Jaden's long catalogue of ex-girlfriends, moving onto Tyler The Creator was innevitable,, what a catch!

At least if the news is true and they break up, we'll get 2 decent heartbreak-inspired albums out of it...I say "decent"....

Jaden played Dre Parker in the 2010 reboot of The Karate Kid which has a rating of 6.2 on IMDB

Did he find Happyness?

Jaden also played along side his father Will Smith in The Pursuit of Happyness (2006).

Jaden is set to star alongside Cara Delevingne in "Life in a year" set to be released in 2019.

Jaden and Madison had been friends for years. They first began dating in May 2010. They Split in August 2011, but have remained Friends.

Sarah Snyder (born Sarah Irene Snyder on July 30, 1995) is reportedly an American model. Sarah was thrust into the spotlight in 2015 when she began a high profile relationship with Jaden Smith, the then 17-year-old

It might be a little easier to see why he does so well with the ladies!

Amandla Stenberg (born October 23, 1998) is an American actress and singer. She is known for her portrayal of Rue in The Hunger Games and Madeline Whittier in Everything, Everything.

Jaden Smith Talks Kylie Jenner in Wonderland Magazine May 2013 On his relationship with Kylie: "I was in LA, we were all hanging out. Then I went to New York and she came too, then she came here and surprised me, so that's pretty baller. She's one of my best friends.

Sofia Richie (born August 24, 1998) is an American fashion model. She has been featured in campaigns by a number of major brands including Tommy Hilfiger, Michael Kors and Chanel. She is the youngest daughter of singer and songwriter Lionel Richie and adoptive sister to fashion designer and television personality Nicole Richie.

That's not a bad resume for someone who takes his cut off dreadlocks to premieres with him.

Taking after his iconic character of rapper/womanizer The Fresh Prince, he must be so proud.

All of this packed into the career of someone who is basically about 3 years old.

The declaration of love was filmed by a gig attendee and has since been dissected in great detail. Many fans have pointed towards Tyler’s jovial reaction at the gig as evidence of a wind-up, with the rapper appearing to chuckle with amusement at Jaden’s bombshell.

Congratulatory tweets are in order?

Some have already expressed their approval of this celebrity union, taking to social media to congratulate the famous ‘couple’. One person tweeted: "Jaden Smith just admitted he’s dating Tyler, the Creator and I want you guys to know I am stanning that sh*t".

Another Tweet said: "Apparently Tyler, the Creator and Jaden Smith are in a relationship. Two of my top favourite artists and individuals dating one another. I need a moment."

Not letting it drop

Later on, Jaden continued to spark intrigue over Twitter, tweeting: "Yup @tylerthecreator I told everyone you can’t deny it now." In response to this, Tyler said: "hahaha you a crazy n**** man"

Some people are already referring to the pair as their ‘favourite couple’, while others have noted how Tyler hasn’t exactly given a firm ‘no’ to the rumours...welcome to Family Smith?