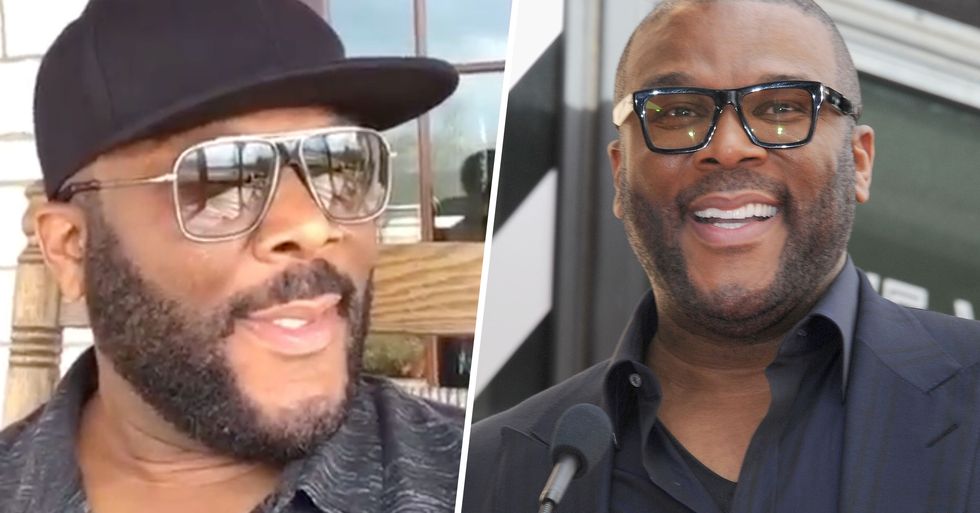 Tyler Perry is a man who knows how to help people during difficult times.

The multi-millionaire decided he would tip workers at one of his favorite restaurants amid the current crisis in order to make things a little easier for them when the business closed. The moment was truly heartwarming.

Read on to find out all the details on this wholesome story.

Tyler Perry is known for his generosity.

This is not the first crisis he has got involved in and it definitely won't be the last.

For those of you that don't know, Perry was born September 13, 1969, in New Orleans, Louisiana.

Over the years, Perry has crafted an impressive career in the entertainment industry, spanning theatre, acting, writing, and directing.

But, he had a difficult childhood, suffering years of abuse.

One of 4 children, Perry had an extremely tough upbringing and endured years of abuse at the hands of his father. According to Biography, he once described his father as a man "whose answer to everything was to beat it out of you."

But his trauma didn't end there...

Outside of the home, the star later admitted he was sexually abused by 4 different adults - attempting suicide at one point to try to escape his difficult situation.

After dropping out of high school, he managed to get himself on the entertainment industry radar...

After eventually earning his GED, the star held a string of unfulfilling jobs before discovering his true passion for entertainment.

Oprah Winfrey was the inspiration behind his first musical I Know I've Been Changed.

As per Biography, after watching an episode of Oprah Winfrey's famed talk show, "Perry was inspired by a comment on the program about how writing about difficult experiences could lead to personal breakthroughs." So, he took up the advice and started a series of letters to himself, which later became the basis for the musical. Though it opened to a disappointing turnout, he was not deterred and continued on his pursuit to break into the industry.

The play featured the character of Madea, based on his mother and several other women in his life. Perry also starred in the play in drag. "Madea" went on to feature in several other plays as well as a string of successful films.

Soon enough, Perry became the box office superstar was know him as today.

He also recently earnt himself a star on the Hollywood Walk of Fame.

The acting and writing powerhouse said he was so "grateful" to be awarded a star and it made his "heart so full" to see the cast from all his shows attending to congratulate him.

It seems he's tackling the movie-making realm on a whole new scale.

The star has opened his own major movie studio.

The "Tyler Perry Studio" is huge, and we mean, huge...

Which makes it bigger than "Disney, Warner Bros. and Paramount’s studios in Burbank, California, combined."

The site once served as a Confederate army base, and is now, thanks to Perry, one of the largest movie studios in the entire U.S.

When it comes to the Hollywood scene, he's certainly a force to reckoned with.

Whether it's his shows, acting jobs, theatre or directing work, Perry knows how to produce a big box office hit... Well, A Fall From Grace might be the only exception, but hey, we still appreciated the effort.

But Perry is known for more than just his career...

The multi-millionaire has done his best to get involved in causes that have massively affected people, their homes and their welfare.

From providing aid to the Bahamas...

After Hurricane Dorian devastated the tropical island, he stepped in to provide critical aid to the civilians there. Perry sent a plane with medical and food supplies to help as the area started re-building.

But his latest stunt has really opened our eyes to just how far his generosity goes.

Amid this global pandemic that has stopped the progression of our lives, we all find ourselves in difficult financial positions. With businesses shutting down and a lack of money in our bank accounts, it becomes harder to handle the pre-existing pressures of paying bills and keeping afloat.

It seems as if Perry knew this was going to be a massive issue for the workers at one of his favorite restaurants.

On Sunday, the business mogul went to pick up some food from the joint and as he drove to the place, he was already planning on leaving all the workers there the greatest tip of their lifetime.

And there were forty-two out of work individuals, which meant Perry spent a whopping $21,000 that night.

Talk about an expensive meal...

Even though the government is set to be providing some extra financial help to people that have been let go by their employers, the money might not be reaching them for up to twenty weeks, so this is a life-saving donation by Perry.

What a great man.

And during these difficult times, we must all help one another the best we can. As the pandemic continues to hold us hostage, we will bring you daily updates when we have them. Until then, stay home and stay safe. If you're bored in self-isolation, then we've compiled a list of shows that should keep you busy...