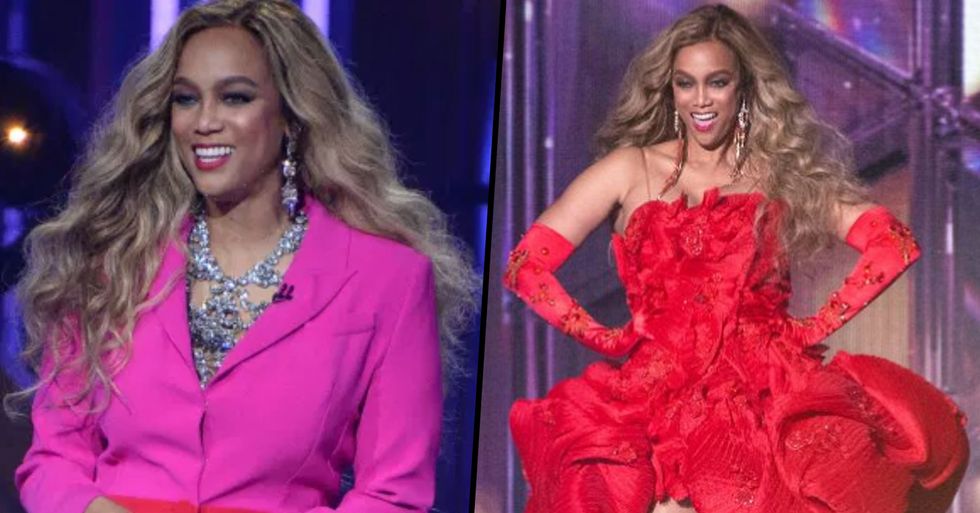 Tyra Banks made her hosting debut for Dancing With The Stars on Sunday, and it's safe to say fans weren't impressed with what they saw...

There were a lot of big changes and new faces on Sundays, Dancing With The Stars twenty-ninth season premiere.

But there was one notable change this time around.

Longtime hosts Tom Bergeron and Erin Andrews have been replaced.

Andrews revealed that her and Tom's unexpected dismissals from the show "was a surprise."

And that hers came via phone call. Ouch.

And who replaced the stars as host?

No other than Tyra Banks.

But it seems many viewers were far from happy with this...

And an influx of angry fans took to Twitter to put the supermodel on blast after watching her hosting debut.

It all started when Tyra Banks only fifteen years old.

You may also remember her from the Disney Channel original movie, Life Size.

She played a real-life Barbie doll in the flick.

Lindsay Lohan was in her prime, these 2 were a match made in movie heaven.

How could you forget America's Next Top Model?

America's Next Top Model, or ANTM, was created by Tyra in 2003. She was the executive producer and hosted the show for dozens of seasons.

Or maybe you remember her famous freakout...

We still cower in fear hearing Tyra yell at this model. If you learned anything from this, it was to never disrespect Tyra because she will drag you in front of the entire world.

Or this epic moment.

But it seems her return to hosting over the weekend didn't really go down so well...

After making her debut as the new host of Dancing With The Stars for Sunday's season premiere, many viewers took to social media to slam the star.

A direct reason was never given as to why Bergeron and Andrews were replaced...

Though Valerie Bruce, general manager of LA Productions, stated that Dancing With The Stars was being taken "in a new creative direction" for the new season, according to Daily Mail.  She also offered her, "sincere thanks to Tom and Erin, whom we will always consider part of the Dancing with the Stars family."

Fans are far from impressed with the decision if Twitter is anything to go by.

Just watched Dancing with the stars on my DVR. Not impressed with Tyra Banks bring back Tom and Erin #DWTS
— glenn noon (@glenn noon)1600241522.0

Watch a clip from the show here to see for yourself. For more on Tyra, scroll on to see what she had to say when forced to address her "vile behavior" on America's Next Top Model...