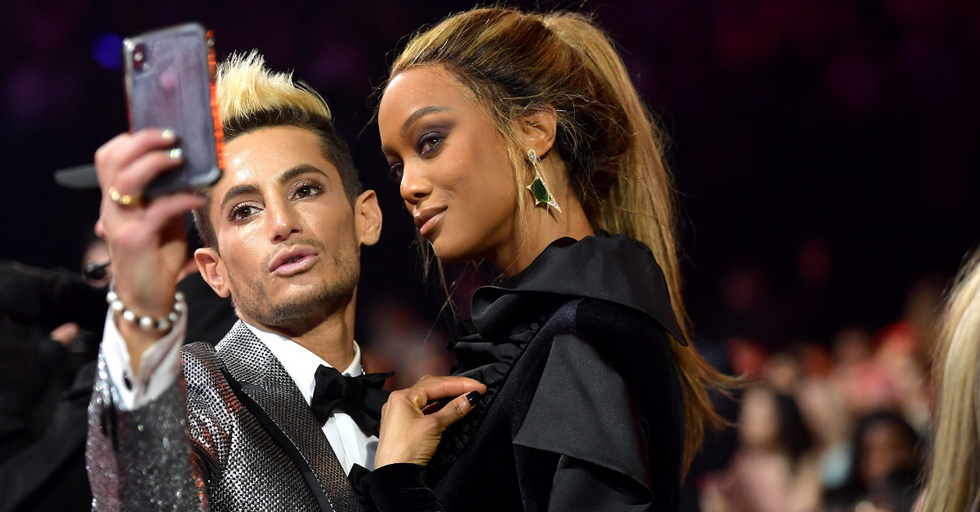 Tyra Banks Is Opening a Theme Park for Modeling

Tyra Banks, America's original top model. She is sassy, intelligent, a great businesswoman and absolutely gorgeous on top of everything else. Tyra has made waves in the modeling industry by breaking barriers and shattering standards that other models are held to. She holds nothing back and always stays fierce.

We are all for Tyra and her breaking stereotypes and venturing to new heights in her career, but this next venture of hers is a little questionable. The ANTM host is planning on opening up an adventure theme park of her very own called "Modelland." I love that she has such an entrepreneur spirit and is so excited to try new things, but Modelland sounds a little, well, weird AF.

Tyra has been very ambiguous about the theme park and it's got a lot of people confused. We can't tell whether we are scared or excited about Modelland, but mostly we want to know what the heck it is.

Tyra Banks is back at it again.

It's hard to know where to start with Tyra's life because she has already accomplished so much in her life. She is a woman of many talents and her career has evolved and changed a lot, especially lately.

It all started when she was only 15 years old.

You may remember her from the Disney Channel original movie, 'Life Size.'

She played a real-life Barbie doll in this movie and she absolutely nailed her role. This movie was way ahead of its time and if you haven't seen it, you're truly missing out on an incredibly adorable movie.

I mean, this movie is timeless.

Lindsay Lohan was in her prime, these two were a match made in movie heaven.

How could you forget 'America's Next Top Model'?

America's Next Top Model, or ANTM, was created by Tyra in 2003. She was the executive producer and hosted the show for 22 seasons and each one got better than the last.

Or maybe you remember her famous freak out.

I still cower in fear hearing Tyra yell at this model. If you learned anything from this, it was to never disrespect Tyra because she will drag you in front of the entire world.

Or THIS epic moment.

What does the woman who's done it all do next?

I think Tyra was getting a little bored of hosting and modeling, so she spent over 10 years devising something that would blow our mind, and it surely did.

Tyra Banks announced she will be opening up her own dream world and she is so kindly inviting the public to join her (if you pay the entry fee).

Right off the bat, I'm intrigued. What is Modelland? An adventure park where we all learn how to model? Will it be like a live episode of America's Next Top Model? Will there be catwalks everywhere and paparazzi running amuck, trying to take your photo? I have so many questions!

After reading Tyra's interview with Variety, I think we actually have more questions than answers. I'm going to try to explain it as clearly as I can, but I think I'm still confused as well.

It's going to be fierce, we think.

"Modelland is going to be a place where the modeling world meets fantasy, meets entertainment, meets technology, meets retail, meets dining, meets … your fiercest best self you could ever imagine," Tyra explained in her interview. I don't know what this exactly entails, but I'd love to be fierce, so sign me up.

It's going to be an emotional experience.

Tyra wants her visitors to engage emotionally with the attraction and leave a better version of themselves than when they first entered the attraction. "When people leave Modelland, we want them to feel overjoyed and empowered," Tyra said.

It's not just a place, it's a movement.

In a tangled response to the simple question "What is the purpose of Modelland?" Tyra said she wants Modelland to be a movement, not just a place to visit. I still don't know what that means, but I'm not giving up on trying to understand it all.

Okay, but what is it actually going to be like?

All I want to know is if I can ride a rollercoaster and eat a funnel cake, specifically in that order. Modelland doesn't sound like the place that will serve funnel cakes, but I'm staying positive.

Tyra can't give us the details.

The people want to know what the heck to expect at Modelland, and Tyra did an incredible job of avoiding any and all clarity. "Modelland will be a multi-level ticketed attraction, so there will be different ways in which you can experience it," Tyra tried to explain. It kind of sounds like she's trying to reach her word limit in an essay by repeating the same thing, just using different words.

She's keeping it all on the down-low.

"There will be a robust retail offering and experiential dining — not your typical restaurant outing. It will be way beyond that. But that’s all I can say about that for now," Tyra said. Dang it, Tyra, just tell me if I can ride a Ferris wheel or not!

Tyra tried her best to explain it, but she kind of failed.

In order to clear up the confusion, Tyra tweeted a picture with her and some birds and a few catchy phrases, inviting you to "step into the light." It's all suddenly so clear to me. Except it's not. I actually feel very in the dark about all of this.

Well, here are the facts.

Although we don't actually know what is going on at Modelland, there are some things we do know for certain.

Modelland is expected to open in late 2019 in Santa Monica, CA. It's going to be 21,000 square feet, which is about the size of a hockey rink. Tyra is hoping to expand and explore franchise options for Modelland, stating that this first branch in Santa Monica is just the beginning.

"Santa Monica Place will be our inaugural flagship with strategic plans to open in other major cities across the US. And we have a robust strategy to expand globally as well," Tyra said. I'm thinking Paris will be the next stop. The fashion city of the world definitely needs a Modelland.

She wants to be the next Walt Disney.

She's got some big dreams and wants big shoes to fill. Tyra hopes Modelland will live up to the impact and expectation of Disneyland, which is a reach. Like, a crazy reach.

Tyra, let's not get carried away.

"I’ve always looked up to Walt Disney’s empire," Tyra said. "I have always wanted to create something that exists beyond me, so that when my time on Earth is done, people — young, old, women, men, families, friends — will still have many outlets and physical destinations to visit to be the dream versions of themselves, to have their beauty celebrated and to just let loose and have fun."

People might end up just walking in circles around Modelland, because they don't know what is actually going on. But hey, maybe they'll meet Tyra which would make it all worth it.

People don't know what to expect.

You come in looking like a tacky tourist, you leaving as America's next top tourist. Amusement park chic, but make it fashion.

Hardcore Tyra fans are way excited about Modelland, even if they don't understand what it is.

Some people were looking to get hired.

What if all the employees were models so they were serving funnel cakes and serving looks?!

ANTM fans are here for it.

Most fans will always support anything and everything Tyra does. I'm sure if Modelland season passes are a thing, these fans will invest in it.

No matter what, stay fierce.

If you are super interested in Modelland, Tyra invites you to sign up for her email list. Hopefully, there will be some more clarity towards what to expect because honestly, no one really knows.

Until we know what to expect at Modelland, we'll keep making jokes to get through all the confusion.

Even though our expectations are a little blurry and we still have no idea what's going on, we'll be excited no matter what because, well, it's Tyra Banks.

If Modelland is coming soon, you need to get your best smize ready because I can almost guarantee there will be cameras there. Share the news with your besties to start saving up for a trip to Modelland!