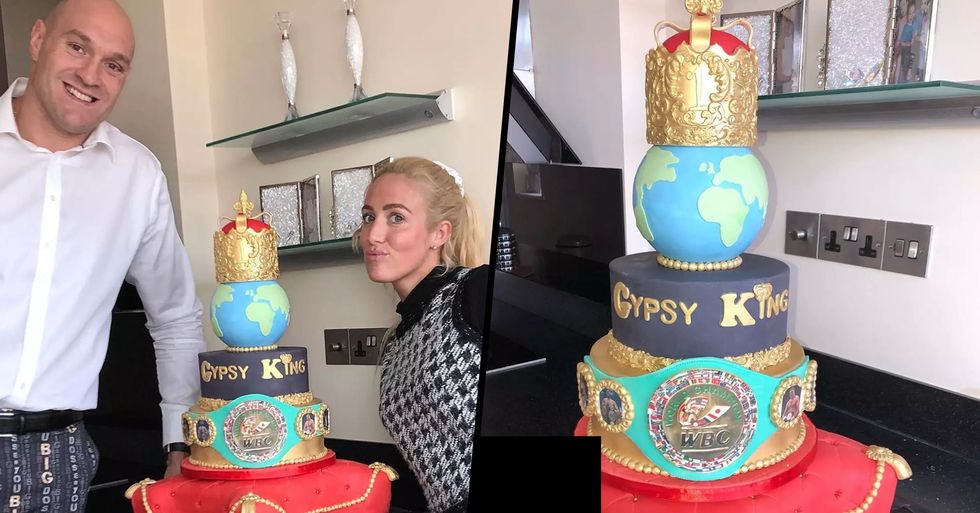 This week, Deontay Wilder suffered a humiliating defeat at the hands of Tyson Fury. He then followed up with a rather rubbish excuse as to why...

But there is a happy ending to the story - for Fury. Scroll on for the incredible cake his wife helped him celebrate with!

So it seems as though this rivalry isn't set to be over anytime soon...

But now footage has surfaced that suggests Wilder's claims might be false.

In an interview he gave in 2018, Wilder said something that makes this costume excuse rather suspicious...

Deontay Wilder confirms during a guest appearance on @joerogan podcast in December 2018 that he specifically trains… https://t.co/n9ukbXVdJc
— Against The Ropes (@Against The Ropes)1582742357.0

Many are feeling suspicious of Wilder.

i have so much respect for Deontay Wilder but that costume excuse is so weak nobody made you wear that just take th… https://t.co/1cjCnt5rTi
— Dillon Danis (@Dillon Danis)1582653483.0

Costumes never slowed this legend down!

What do you make of this controversy?

But there is a happy ending to this story.

For Fury, that is. It comes courtesy of his lovely wife, Paris.

Because after they arrived back in the UK?

She presented him with this absolutely incredible cake.

It's truly a piece of art.

What a pair of cuties!

"Just a little cake to celebrate bringing back the WBC belt," she wrote.

Massive congrats to Fury on this historic win.

And if you fancy more boxing controversy, scroll on. We've got all the latest on that Logan Paul vs KSI drama.